The 'Shroom:Issue 111/My Best Friend

"I just want my friend back," is something I've uttered many times in my life as I've lost a lot so many. I lost a friend to religious fundamentalism as I was slowly drifting away from Christianity and starting to explore my own ideology and beliefs, and things only went more sour after I came out as trans. One of my closest friends and work colleagues I lost because her Visa expired and she had to return to her home country, although we still sporadically stay in contact over Facebook. Just two weeks before Easter this year, one of my longest friends abandoned me over a single mistake I made, despite my constant apologies and pleads with her to please forgive me. But never did I think I would lose a friend, let alone a best friend, to death... the thought never crossed my mind, despite how often said friend and I would talk about Axiomist on ZeldaWiki, another user who tragically passed away unexpectedly. 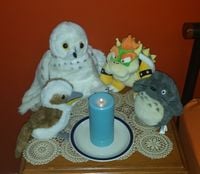 But going back many, many years before, Walkazo (talk) first joined the Wiki on July 27th, 2007, just two months after I had joined. We weren't super close initially, and indeed, I had resigned from my position as an administrator long before she would eventually see her time in the spotlight on January 29th, 2009, when she was promoted to System Operator. What made her promotion so special was that she was the first female user to be promoted to an administrative position on the MarioWiki, not counting me who was still identifying as male at the time, or Grapes/Smiley the Hun, who was only promoted very briefly as an accident. It was quite something, and she damn well earned that position with her insane devotion to maintaining the wiki and writing up policy, which would eventually see her promoted to bureaucrat on July 22nd, 2011, almost four years after she first joined the Wiki... it was almost poetic she was promoted by one of her closest friends on the wiki at the time, Stooben Rooben (talk).

But I became friends with her during my emo phase in 2009 when I returned to The Xephyr Board, Stooben's now-dead-but-then-active forum that behaved as an exclusive alternative to the Mario Boards. We talked about random shit in our lives via PM exchanges, and became very emotionally close, which made it all the more tragic when I lost my shit again towards the end of 2010 and ostracised her, along with basically everyone else, simply because I was terrible at controlling my emotions. This became a huge problem with several of her close friends at the time, who refused to talk to me even after we patched things up later in the year, although that all got sorted eventually and we shed every bit of bad blood between us. From then on, we were perfectly good mates for all the years to come, having our occasional downers, arguments, and disagreements, but that's just par the course for a friendship, isn't it? We actively enjoyed each others company and often made time late in the night or early in the morning just so we could catch each other despite severe difference in time zones between Victoria, Australia, and Ontario, Canada.

Alongside Glowsquid (talk), I was the only person on the Wiki that Walkazo had added on MSN and then later Skype, and indeed she was the only reason I ever really used Skype (since Glowsquid, Stooben, and others were easily contactable elsewhere). We would confide in each other over struggles in our lives or in our respective parts of the community - for me, The 'Shroom, for her, the wiki. Indeed, she could get quite venomous when complaining about the people disrupting her work on the Wiki, but we always were able to filter our rage out to each other... it helped us maintain professionalism in public, at least for the most part, and I think our mutual bitching helped strengthen our understanding of each other. Ever excited about my transition to a woman, I would often share pictures of myself to show how I'd been coming along. Among these were some decidedly risque ones, with her permission of course, and the excitedly bisexual Walkazo would always complemtn me on my progress and assure me that I was such a beautiful woman... she was always there to make me feel good. This sort of thing was such that we often joked that I was her slut, which seemed like a fluffier alternative to saying I was her bitch. Given all that, if we had known each other offline, me and Walkazo could easily have been mistaken for lovers, I truly believe that. That was how close we were.

But there I was, working on what was Easter Monday in my time zone, but Easter Sunday for her; being Australian, I live far in the future from the large North American population that resides in this community. I had picked up a heap of extra shifts for the Easter break, and the school holidays that followed after, but the nature of my job allows me to spend a lot of the time thinking about whatever random tripe comes to my head. As was very common, I spent much of my work day on Easter Monday pondering things to bring up Walkazo, next time I caught up with her on Skype, specifically sharing with her more details about Darkest Dungeon since I had been binging on that at the time. I was at work when Stooben Rooben (talk) messaged me over Steam asking if I was at work, since he had something very important to tell me but that he didn't want to interfere with my work day. I thought nothing of this, I figured that it was some massive blow-up on the Wiki or some stupid bullshit happened to him offline to make his life needlessly difficult, as was usually the case, so imagine my shock and disgust when I returned home from an otherwise joyous day of work, mind brimming with things to talk to my dearest friend about, to learn that she had died in a car accident earlier on Easter Sunday. I was asleep when it happened... I couldn't believe it, I actively refused to believe it at first. But eventually, it struck... she was actually gone. I cried so much that week, and it made enduring the next two weeks of work - which were busy, as it was school holidays here - absolutely agonising until I was able to take time off after that.

This was the last conversation I ever had with her... I didn't even say goodbye since I was so distracted playing video games like an asshole. At the very least, my last conversation with her was a happy, funny one, however short it was, and even if it was just me sharing with her some dumb conversations between me and Banjonator1 (talk) concerning 4Chan's music board, /mu/. She was a good sport like that, listening to me harp on about shit she didn't really understand... I've been playing Overwatch a lot lately, and while it's fun, I can't help but feel depressed while playing it since it's exactly the sort of game I would gush to Walkazo about, and she would just listen and ask questions like a perfect friend would. I wish I had extended the same courtesy to her more often about her birds, but I always thought I'd have all the time in the world to talk to her... Hell, even the new Pokémon Rowlet fills me with equal parts joy and sadness because as cute as it is, I lament that Walkazo, with all her deep affections for birds, will never be able to see it.

Walkazo lived by this quote. It was her favourite part of Rick and Morty.

I've been told before that while death becomes easier to cope with over time, the first sudden death of someone so close to you will permanently scar you and stay in your mind... it just becomes easier to cope with over time. I don't doubt that. I can't think of a single day since her passing that I've not thought about her in some capacity, sometimes in a positive light, sometimes it's more to grieve, but either way she will probably stay with me to my own unfortunate demise. Walkazo could be bossy, pedantic, judgmental, and very impatient at times, but damn it all if she didn't do her best to make those she cared about feel loved and appreciated... and she had more of an impact on my development as a person than she would ever know. It was her who first accepted my gender identity when I came out as trans; it was her who introduced me to the beautiful world of science; it was her who stood by my through my worst bouts of depression and anxiety. She put up with all my whingy bullshit even as she struggled herself with finances, school, career... so much of who I am is thanks to her, and I just hate that it's only after her passing that I've come to fully appreciate that. Looking back through our old conversations, we had this exchange just a week before the incident...

Out of respect to her lack of religious faith and devotion to science, I choose not to give out any platitudes of her "being in a better place" or "being in heaven/nirvana/whatever," since she wouldn't believe any of that for a second. The two of us often spoke of our belief in Joyful Nihilism, that particular idea that there is no inherent meaning or purpose to life and that we are only here by pure accident and not because we have anything to accomplish in life... so fuck it, enjoy yourself! She grew more attached to this ideology as she began watching Rick and Morty in the weeks before her passing, and we both took a lot of comfort in the idea that the universe in general was an uncaring, indifferent force that doesn't care if the results of its chaos hurt or help you, and that therefore there's no real reason to get hung up on "unfortunate circumstances" that we might find ourselves in. So that end, believing that there was any purpose to her death or that she's still around watching over us feels disrespectful to her memory, at least for me... and I want to honour her the way she would've wanted. But of course, she also would've wanted others to remember her and grieve the way that's most comfortable for them, so by all means, you do you.

I loved you so much, Walkazo, and I always will... you were, are, and always will be my best friend. You will always have a place in my heart.