MiracleDinner is an active user of the Super Mario Boards community.

I'm a 18-year old woman from the United Kingdom with a huge interest in the Mario franchise and several other things. I study Mathematics at university. I've been playing Mario since early childhood and joined the online community in 2019. 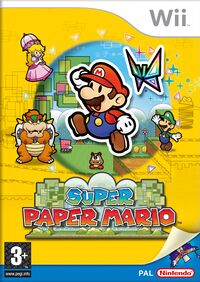 I am a huge fan of the Mario RPGs and in particular I love the first three Paper Mario games and the first four Mario & Luigi games. I value the story and characters above all else but there are also other things I like about these games. I would say that the order in which I like the games from favourite to least favourite is as follows (bear in mind that as my opinions can shift this may be inconsistent with other lists I have posted in the past):

1. Super Paper Mario: Played since I was very young and has always been my favourite Mario RPG as well as my favourite game of all time. Like most fans of the game, I like it most of all because of its story and characters but I also loved a lot of other things about the game, such as the music and gameplay. Of course, it's also an extremely nostalgic game at this point.

2. Paper Mario: The Thousand-Year Door: I started playing this game age 15 and at the time it was my third Mario RPG and the first new one (to me) in many years so it was a very refreshing change and it lived completely up to all the hype the Paper Mario community had given it that inspired me to get the game, although I retain the unpopular opinion that it is bested by its successor, Super Paper Mario. Everything about this game is great, the battle system, the story, the music, the artstyle, etc. This is my second favourite game of all time.

3. Mario & Luigi: Dream Team: Great story and characters and amazing music and the gameplay is pretty great too, overall it has everything I want in a M&L game (besides Fawful), and is nearly the perfect sequel to BIS imo. The Dream World was awesome but not quite as much fun as Bowser in BIS.

4. Mario & Luigi: Bowser's Inside Story: Also very nostalgic as like Super Paper Mario I have been playing this game since I was very young and like TTYD it is a very well refined game in almost all respects. However I prefer TTYD and Dream Team due to having a better story and battle system in my opinion.

5. Paper Mario 64: I liked it because it was quite like TTYD and had many of the same admirable qualities like a good battle system and a lot of great characters. However I feel that it is a dated game in some ways such as graphics, music, and I also feel the overworld gameplay and battle system both felt a lot less... smooth than BIS and TTYD.

6. Mario & Luigi: Superstar Saga: The second Mario and Luigi game I played after BIS, and it was a great throwback and really cool to see so many similarities that I never thought I'd see in another game (growing up I had no idea about the other Mario RPGs besides SPM and BIS). It was especially a treat to see Fawful again. The story and characters were good and the music was amazing.

7. Mario & Luigi: Partners in Time: Close between this and Superstar Saga, as this too was a cool throwback to the M&Ls I had played by that point. I found the gameplay significantly improved from Superstar Saga and although it didn't rival BIS it was still good in its own right. The story was pretty good but I felt the music was a lot less interesting than Superstar Saga or Bowser's Inside Story.

8. Super Mario RPG: Legend of the Seven Stars: I think the story and characters are good but I find the gameplay and graphics really drag it down for me and I don't like the music either. In particular, I feel that the battle system is much better refined in later games and the overworld gameplay lacks the fun features found in later games (such as the paper transformations in TTYD or the babies in PIT). Overall I like the game at least a little but I don't love it.

9. Paper Mario: Color Splash: I actually like the battle system but otherwise I dislike CS, I'm particuarly discontented that the game lacks interesting characters and just has lookalike Toads everywhere.

1. Mario & Luigi: Paper Jam: Unfortunately, it doesn't look like it'll have interesting characters from the two series but the gameplay looks interesting.

2. Paper Mario: Sticker Star: Generally hated by the Paper Mario fanbase but I feel I wish to try it anyway.

3. Paper Mario: The Origami King: Don't own a copy of the game at this point and being new it probably won't be cheap but I hope to get to play it one day.

I'd also love to get to play the remakes of Superstar Saga and Bowser's Inside Story one day even though I've already played the originals because I love them that much.

My favourite Mario RPG characters are the main villains of SPM (including Mr. L), Vivian, Fawful, Cackletta, Lady Bow, TEC-XX, the Shadow Queen, Tippi, Starlow, Luvbi, and Doopliss. I also feel many of the games contain great versions of characters who aren't exclusive or original to the Mario RPGs, such as Bowser in BIS and the babies in PIT.

I love the 3D platformers of the Super Mario series, and have finally gotten to play them all. My favourite list is:

1. Super Mario Odyssey: Builds on its predecessors and brings everything to nigh perfection. The movement and open world exploration in this game was awesome, the capture mechanic was so cool, the graphics were so beautiful, it's got original characters, interesting settings, and has a better plot that most mainline Mario games.

2. Super Mario Galaxy 2: My first 3D platformer is not only an excellent game as agreed on by most of the Mario community (and usually arguments against this game's quality argue that it's too similar to its predecessor, which, well, I played this first) but is very nostalgic.

3. Super Mario Galaxy 1: Great for many of the same reasons but I feel its principle shortcomings in comparison to its successor is being a bit too easy and much less nostalgia. However the story was great (not Mario RPG level though.)

4. Super Mario 3D World: Played this when I was 16 and it was really cool how it was like the 2D Marios but in 3D. Its graphics and music were amazing and its gameplay was very well polished. I've only played the Wii U version and I'm not sure if I'll ever try its re-release on the Nintendo Switch.

5. Super Mario 3D Land: Great for most of the same reasons as SM3DW barring the graphics (I played SM3DW before SM3DL) and it was really cool to have it on handheld. However I found it too easy.

6. Super Mario 64: Played over the summer when I was 16 and though I didn't play it during "its time" it was a blast. I did like the open world style but I also felt some of the time that worked against it as for instance I'd often struggle, not knowing what to do. I did feel it was too hard. The music was quite good.

7. Super Mario Sunshine: I did like this game but I feel it's my least favourite by far. Much too difficult, doesn't benefit from the open-ness nearly as much as 64, monotonous theming, didn't like the music very much, and I found many of the levels more frustrating than anything else. I did appreciate the story though.

Super Mario Maker 1 was an amazing game and it was a dream come true to create and share my own Mario levels and to play the genius, and sometimes not so genius creations of others providing and endless supply of interesting Mario platforming. I'd love to play Super Mario Maker 2 some day and I'd be delighted if Nintendo made a 3D Super Mario Maker or incorporated Super Paper Mario into the Maker series somehow (albeit the latter is a little unrealistic to hope for if I'm honest.)

I own Mario Kart Wii, which I do not like. I've also played Super Mario Kart once, which wasn't any better.

I own Mario & Sonic at the London 2012 Olympic Games, which I enjoy a little.

I own both versions of Donkey Kong Country Returns which I love. I later also played Tropical Freeze which was great as well.

I used to own but have lost Mario vs. Donkey Kong: Mini-Land Mayhem! which I enjoyed somewhat.