I think it's both, as Wario is the titular character. -- Son of Suns

I keep finding two different stroies to this game. One has Wario using his monsters to take over the woods, the other has Wario already owning the woods and planning to use his monsters to attack the Mushroom Kingdom. Did the two versions of the game have different stories? --AgentCH 14:58, 26 July 2008 (EDT)

Because it seems like most puzzle games in the US/Europe with familiar characters are localizations of Japanese games like Super Mario Bros. 2 is Yume Kojo: Doki Doki Panic in japan or Kirby's Avalanche is Super Puyo-Puyo, is this a localization of a Japanese game? Hello I am user ChillGuy.

I have been inactive for quite sometime, I have become much more mature than I had when I first joined this wiki, after being apart of Wikia for almost a year.

Nope, this game was created as it is from the beginning. Other than text, nothing was changed in the translation.--Knife (talk) 05:00, 7 September 2010 (UTC)

The NES manual, Wii Virtual Console manual, and Wii U Virtual Console manual all have the names "Squeak" and "Fuzz" swapped compared to Mario Wiki. From what source did Mario Wiki find that Squeaks are the bear/sheep-like enemies and Fuzzes are the enemies with curly ears? I'd like to know because that source does not agree with any of the manuals for the NES version of the game.

The SNES manual has the Squeak, Spud, and Fuzz grouped together, so it's much more difficult to tell whether that manual agrees with the other 3 or if it agrees with Mario Wiki.

http://gamesdbase.com/Media/SYSTEM/Nintendo_NES/manual/Formated/Wario-s_Woods_-_1994_-_Nintendo.pdf (if the link is removed, search for "nes wario's woods manual pdf")

Why did the entire wiki ignore or fail to notice the English names in the NES manual?

Because not a lot of people own Wario's Woods for the NES.

The above topic mentions the English instruction manual which supposedly has the English names for the bosses, but they have been reverted back to their Japanese names. Was it a fake? Zakor1138 (talk) 16:46, 29 November 2014 (EST) 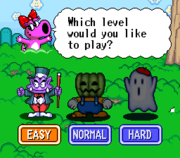 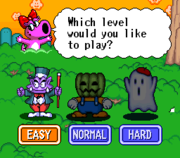 For the SNES version, there is a hidden Extra Challenge Mode.

I don't see why it can't be mentioned in Hard Mode. It now has information for Super Mario Bros., Yoshi's Safari and Luigi's Mansion -- even if their hard modes don't explicitly name it as such (especially the latter's Hidden Mansion). --Zootalo (talk) 01:54, 8 July 2016 (EDT)

Given this proposal, I'd say the SNES Wario's Woods is more than transformative enough to qualify for a split. In addition to adding the VS COM and extra difficulty, the existing Round Game and Time Race game modes have significant changes between consoles as well, with entirely different monster layouts per screen, soundtrack, and the removal of standard bosses. It's somewhat forcing it to keep them in the same article. LinkTheLefty (talk) 10:25, October 20, 2019 (EDT)

It's been almost a year since this was initially suggested, but I agree with splitting. --