The Book of Kongs

This article is about an upcoming book. Editors must cite sources for all contributions to this article. Edits that do not follow this standard will be reverted without notice.

The Book of Kongs is an upcoming collectors book based on the Donkey Kong series[1]. It is being published by Dark Horse Comics, using unused material created by the Rare writers of the so-called "golden age of Kong". While initially planned for an English-language 2014 release to correspond with the 20-year anniversary of Donkey Kong Country, unspecified delays forced the still-unannounced project to be shifted to a January 2016 (the Year of the Monkey) release in English, Japanese and French. 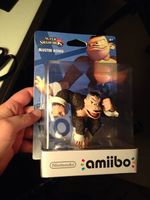 Limited edition amiibo that will be packed with the first print run of the book[2].

Following the success of The Legend of Zelda: Hyrule Historia in Japan, Nintendo started assessing its other popular series for future publications even before translation of this first book was complete. While a Mario book was initially considered, creator Shigeru Miyamoto advised against such a move due to his long-held belief that the lack of continuity was part of the series' charm[3]. His staff agreed, and instead suggested a book based off of the other series spawned from the original Donkey Kong arcade game, citing the popularity of 2010's Donkey Kong Country Returns. During unrelated talks with Rare, it became known to Nintendo that the original writers of the Donkey Kong Country trilogy and Donkey Kong 64 had actually created an extensive backstory for the games and were still willing to tell the story "as it was meant to be"[4]. When told of this development, Miyamoto still had misgivings about the occasionally dark and violent subject matter that Nintendo had turned down nearly two decades earlier, but acquiesced when it was assured that the stories would be self-contained to the book, and not have any bearing on future Donkey Kong Country games. Rare agreed to collaborate with Nintendo on the project on the condition that their own scribes would write the first draft, in English[1]. When Dark Horse Comics was signed on for English-language version of Hyrule Historia, Nintendo also licensed them to publish The Book of Kong.

The book explores in depth the history between the Kongs and the Kremlings, leading up to the events depicted in the games. While most of the information is being kept quiet until the actual publication of the book, some excerpts pertaining to the so-called "Great Ape War" have been revealed to generate hype[2]. Many details found in the games are being revealed to be references to the unknown war, and new material was added by the Rare scribes to link their original vision to the games produced after 2002, such as the loss of King K. Rool's tail prior to DK: King of Swing.

Aside from the war, other aspects of the series said to be discussed are the exact geography of the island nations found in the core Donkey Kong Country/Land/64 games, and the multiple generations of "Cranky/Donkey Kong"s that give the book its title[1].

This article is about a subject in an upcoming or recently released game. When the game is released, or more information about this subject is found, this article may need major rewriting. Remove this only when the changes have been applied.

This article is under construction. Therefore, please excuse its informal appearance while it's being worked on. We hope to have it completed as soon as possible.

The Great Ape War (also known as The Simian Struggle and The Fourth Kremean War) was conflict occurring on Donkey Kong Island. Lasting from 19XX to 19XX, the conflict pitted the Primate Alliance and its allies against Kremling Kommand. Occurring after a period of relative peace, the conflict became notorious for its high body count as well as its influence in the development of technology and military tactics. Originally written concurrently with the original Donkey Kong Country trilogy of games, information about the Great Ape War remained unpublished until material from the upcoming The Book of Kongs was revealed.[1]

Funky Kong attained early fame in the conflict due to his piloting prowess. Nicknamed the "Brown Barron" due to his custom brown-painted Biplane Barrel, Funky Kong scored 64 victories before being shot down by Klump during an aerial operation. Having lost his tail in the ensuing crash, an emotionally-ravaged Funky would briefly become a militaristic survivalist selling supplies from the war before scalping K. Rool's tail in revenge. 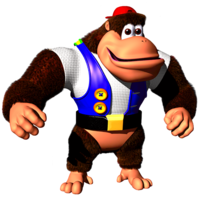 Chunky Kong's fearsome defence of Port Apeson earned him the favours of the Primate Alliance.

Chunky Kong was deployed as part of the 36th Simian Expeditionary Corp to defend Port Apeson on the Kongo Jungle front. Though outnumbered and outgunned, Chunky Kong managed to single-handedly hold off the attacking Kremling force, preventing them from wiping out the corp and reinforcing Kremling positions at Port Apeson. Chunky's performance made him a national hero and a bankable movie star.

2d Lt. Chunky commanded Company B, which was attacked by six tanks and waves of infantry. 2d Lt. Chunky ordered his men to withdraw to prepared positions in a jungle, while he remained forward at his command post and continued to give fire directions to the artillery by telephone. Behind him, to his right, one of our tank destroyers received a direct hit and began to burn. Its crew withdrew to the woods. 2d Lt. Chunky continued to direct artillery fire which killed large numbers of the advancing enemy infantry. With the enemy tanks abreast of his position, 2d Lt. Chunky climbed on the burning tank destroyer, which was in danger of blowing up at any moment, and employed its .50 caliber machine gun against the enemy. He was alone and exposed to Kremling fire from three sides, but his deadly fire killed dozens of Kremling and caused their infantry attack to waver. The enemy tanks, losing infantry support, began to fall back. For an hour the Kremlings tried every available weapon to eliminate 2d Lt. Chunky, but he continued to hold his position and wiped out a squad which was trying to creep up unnoticed on his right flank. Kremlings reached as close as ten yards, only to be mowed down by his fire. He received a leg wound, but ignored it and continued the single-handed fight until his ammunition was exhausted. He then made his way to his company, refused medical attention, and organized the company in a counterattack which forced the Kremlings to withdraw. His directing of artillery fire wiped out many of the enemy; he killed or wounded about fifty. 2d Lt. Chunky's indomitable courage and his refusal to give an inch of ground saved his company from possible encirclement and destruction, and enabled it to hold the jungle that had been the enemy's objective.

Colonel Cranky Kong was the lead planner and organizer of the Primate Alliance. Already ruined by his encounter with Stanley the Bugman, Cranky was transferred to a desk job early in the war after an ill-advised attempt to "cook" an Orange Grenade ended in shrapnel to his back. Cranky's successful invention of the Gorilla Warfare doctrine has made him one of the most successful military leaders of the world.

Pink Donkey Kong Jr. voluntarily enrolled into the Primate Alliance after the invasion. Know for his skills at calculating artillery strikes, he was at one point captured by Kremling Kommand but managed to get out of the POW camp by exploiting his resemblance to Donkey Kong Junior (who had been evacuated overseas to escape the Big Ape City Blitz). He is quoted as saying "any officer who goes into action without his calculator is improperly dressed."

Kommander K. Rool rose through the Kremling ranks due to opportunism and backstabbing former collaborators in the anti-establishment Green Army, for which he operated under the name Komrade K. Rool. Believing himself to be a military genius due to a lucky decision at the Battle of Fungi Forest, K. Rool made increasingly poor strategic decisions as his paranoia led him to purge Kremling Kommand of most of its senior officiers.

General Klump was the supreme commander of the Kremling Air Force (KAF), but he fell out of favour with Kremling Kommand after the Big Ape City bombing campaign failed to achieve strategic objectives. However, he managed to earn a spot back in K. Rool's inner circle after downing the Brown Baron in the final weeks of the war.

Krusha, a.k.a. the Desert Kroc, was known for his professional and honourable conduct, in contrast to King K. Rool's murderous zealotry. He was the "the strongest commander"[2] and most effective of all the Kremling Generals, but after his involvement with a failed assassination plot against Rool was uncovered, he was forced to commit suicide, although the official story was that he died in battle. Postwar propaganda put out by the Kremlings undercut Krusha's intelligence in favour of ballyhooing his brute strength, which became the hallmark of the Krusha Korps named for him, but his old foe Cranky Kong knew better and made sure to tell the true story of his respected rival to the Kongs.

The war saw many breakthroughs in weapon development. One such invention was the Coconut Gun, whose ability to fire in spurts instantly made all other weapons obsolete.

Knowing that the Primate Alliance's outdated military could never defeat Kremling Kommand's in a pitched battle, Lead Organizer Cranky Kong devised the doctrine of Gorilla warfare, favouring small-arms tactics, ambushes and sabotage over conventional tactics. Due to its success, the doctrine was imitated by several anti-establishments armed groups after the war.

The GAW also saw the advent of psychological warfare tactics. One of the Primate Alliance's most successful weapon were the Bongo Drums of War, plastic instruments playing low-quality covers of mediocre pop hits played at an intolerable volume [3].