This article is about the location. For the game that this location appears in, see Wario's Woods.

Wario's Woods (formerly known as the Peaceful Woods) is the location of where the events of the game Wario's Woods take place. The woods were owned by Wario, and at least one of its meadows even features its owner's face before he was defeated (SNES version only).

The forest had been revealed to once have been in peace inhabited by the sprites (fairy-like beings) and quiet creatures until Wario arrived and took over. He then proceeded onwards by placing a spell over the monsters in the woods.

While the location was originally struck by the evil of Wario and his forces, the woods were restored to its original state thanks to the help of Toad and his allies. 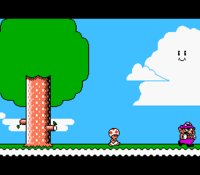 In the Wario's Woods, Wario had manipulated and gained control of the Peaceful Woods through his mysterious powers. The antagonist then sent out the woods' monsters (imprisoned by the curse he put over them) to overrun the forest. Toad, along with Birdo and the Sprites, ventured into the woods (which, in the SNES version, were the both the first and last areas seen in Round Game mode and the only setting of VS Com mode) in order to bring peace to the woods. Throughout their journey, the trio faced countless battles against Wario's monsters and their leaders (the mini-bosses). After passing through countless areas, Toad and his two friends eventually make it to the end of the woods where they meet Wario; thus, causing the final battle for the woods to occur between Toad and Wario (in the NES version and the SNES version's VS Com mode). 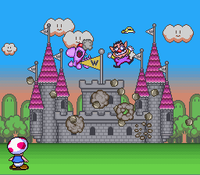 Upon thwarting Wario, Toad is seen either chasing Wario out of the woods (as in the ending of the NES version) or destroying his castle with a single bomb (as in the Round Game ending of the SNES version). Once Wario is defeated, the woods had changed back to normal as peace returned to the area. The monsters who had acted as Wario's minions earlier on had also been stated to have awoken from the nightmare that Wario placed on them allowing them to finally live in peace within the woods. The Sprites were also able to live in peace after the defeat of Wario. As a result, tranquillity returned to the area.