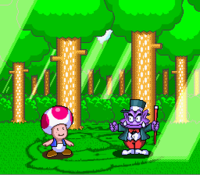 Katsini and Toad in Wario's Woods.

Katsini is the first boss Toad faces in the VS COM mode in the Super Nintendo Entertainment System version of Wario's Woods. He is well dressed in a suit and tie, along with his cane and top hat. He has purple skin, a wide mouth with small tusks jutting out of the lower jaw, no nose, yellow hair, and white shoes. Also, he has more than a passing resemblance to Tatanga. He behaves more like a pre-game trainer than an opponent, encouraging the player after defeat, but he is soon amazed by Toad's abilities so much that he appears dizzy afterwards.