Hey if anyone wants to leave a comment or idea feel free. Sorry if it's not the greatest page so I'm working on it so please give me an idea if you are more "experince" in it I would appreciate it. Enjoy my page!

Super Mario Bros. Deluxe is a platform video game released on the Game Boy Color in 1999 as an enhanced port of the 1985 NES game Super Mario Bros., also including its 1986 Family Computer Disk System sequel, Super Mario Bros.: The Lost Levels, as a hidden reward. It was released fourteen years after the original Super Mario Bros. The game was never released in Japan for the normal Game Boy Color Game Pak, but rather the Nintendo Power cartridge. This game was initially released for the 3DS Virtual Console in Japan, Europe, and Australia in 2014, as part of a special offer, and is now available to download for everyone in Europe, Australia, and North America with an added cost. 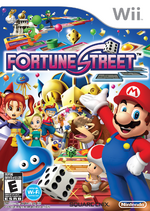 Anyone that wants to steal my box can go right ahead. Just leave a comment that tells me you did.