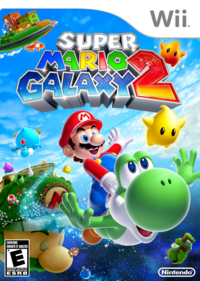 Hey everyone, and welcome to my Nightmare Should Have Been section! This month, I received not one, but TWO PMs about my section!!

So, uh, this is where you’d expect me to put some kind of image, huh? Well, not today!

Anyway, the first PM was from New Super Mario (talk) (known as Beagle on the MarioWiki Forum), who was suggesting that I do:

Well, I’ve already done Super Mario Galaxy 2, so this is suddenly becoming a little bit awkward… uh, yeah… then, despite having tons of bad things to say about it, I don’t have 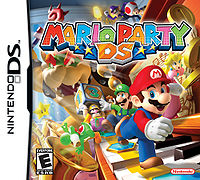 Another pesky Nintendo DS game has slipped into my schedule!
Mario Sports Mix, and I just did Mario Hoops 3-on-3, so no, I can’t do either of those. Then, finally, I have not played this interesting Mario Part series, nor have I heard of it. Perhaps some brave contributor will create a page on this interesting series, riding on some brave horse/centaur thingy just to show how much they love being STRONG. Yes, I know he means the Mario Party series, but the problem is, I’ll just be ranting on about how separate minigames suck and stuff like that… though I think it would be a good idea to do Mario Party 8 sometime.

Then, Count Bonsula (talk) (known as apocalypseArisen on the Forum) requested I do a Mario & Luigi game. I guess I have a better chance of doing that than a Mario Part game, but I only own Mario & Luigi: Partners in Time, and I’m not exactly far in that.

But then I remembered that Paper Yoshi (talk) (a.k.a. Deutschland) also requested that I do Mario PKart Wii, which I turned down originally due to having done a Mario Kart game just before that. After a lot of consideration, I’ve decided to do a Mario Party game – Mario Party DS. 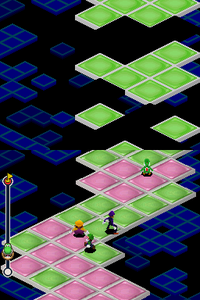 The controls here (Cyber Scamper) are pretty bad – it would have been much better on a console.
I believe this game was a pretty good game, with fun minigames, thoughtful boards and cool collectibles, but there is still lots of room for improvement. Starting off, as I said before, I did enjoy the minigames. Certain minigames, like Dust Buddies and Camera Shy, I find to be very fun and addictive. The game’s minigames – and basically everything else about it – is much better than Mario Party 8 (at least). And Mario Party DS isn’t even on a console, so it can’t fit in as much. Anyway, back to the minigame topic, I did find it annoying that some minigames had 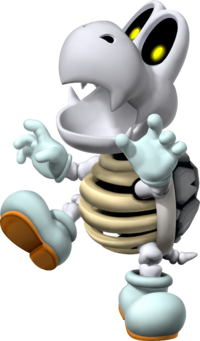 I GOT THE POWER! to transform an ape into a statue and place him in the middle of a jungle with a lot of red and blue circles and rocks and other weird things around him while his friend is just like 0_0
unnecessarily long introductions/endings, and I think that some of them could have been a bit shorter, or if not, simpler.

Also, some of the minigames really don’t work well for the Nintendo DS – a prime example of this is the minigame Cyber Scamper, where you have to get the end of a… well, cyber kind of stage. The course itself is diagonal relative to the characters and camera, meaning that you basically have to hold two direction keys at once, or rapidly switch between two of them (really annoying) plus press ‘A’ occasionally to jump, sometimes even moving while doing that, all while the course is flashing different trippy colors— @_@. This would be much easier and less awkward with a control stick, plus a broader console to make pressing the jump button easier.

Moving on, there were eight playable characters in this game: everyone from Mario Party 3 and Mario Party 4, minus Donkey Kong and plus Toad. Now, I understand that eight is a fine number, this is a handheld game and too many characters (Mario Party 8) 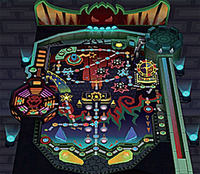 I didn’t like Bowser’s Pinball Machine.
is not good, but I’m pretty sure there could have been more than eight. Perhaps this was the perfect opportunity to bring Donkey Kong back to the party, because his role in this game was completely dismal (a Dry Bones somehow conjured up the power to turn him into a stone statue – yeah, a Dry Bones…). I mean, a DK Space would have even been better than that. Perhaps Koopa Kid and Boo could also make a return, as Koopa Kid just disappeared, and Boo, well he’s cool. So, I think there could have been more characters. After all, Mario Kart DS had… uh… eight plus four, I think… which is seven… ? Right, onto boards. As the game went, I thought the boards were pretty good. The ? Spaces and the other board quirks and events were pretty good. However, I felt that compared to previous boards in the series, Mario Party DS's boards were much smaller and enclosed, and much more linear. This was a little bit boring, especially considering that 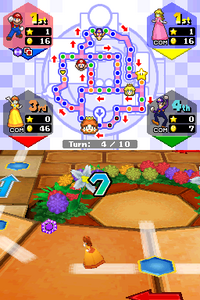 Daisy’s picking up a Hex? I ALWAYS KNEW SHE WAS A WITCH! Disclaimer: I mean no offense to any witches who are reading this, as I know you are not all hex-using, three-eyed freaks. 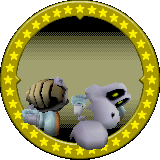 It appears he does not have the power.
games tend to last a long time. I mean, I thought the time predictions were exaggerating, but they weren’t in the slightest. Also, there is a lot of unused space in the scenery of the boards that could be used up. I didn’t like the board Bowser’s Pinball Machine in the slightest. The board is way too linear, and gets boring easily.

The boss stages are either too easy or too hard – the Kamek boss is too hard, and the Piranha Plant is WAY too hard – perhaps even harder than the final boss, who, strangely enough, is the only one with an appropriate level of difficulty. Dry Bones and Hammer Bro. are so easy it’s sad. I think they should have followed a less random difficulty curve. Finally, I thought the Hexes were a pretty good addition to the game. Though I would have preferred Orbs or Capsules, I’m thankful to see anything but Candy (brought to you by the one, the only, Mario Party 8). Also glad to see Items back from their Mario Party 8-related absence

Unlike Mario Hoops 3-on-3, this game has beta elements!

But not too many. D:

Anyway, starting off, Wiggler’s Garden was originally going to be Petey’s Greenhouse, the story being that a Piranha Plant had betrayed Petey (I kind of fail to see how that’s possible, as all they do is move up and down while going “NOMNOMNOM”). Toadsworth was originally in the Item Shops instead of Monty Mole, which kind of wouldn’t have suited Toadsworth because I can’t really imagine why he’d be six feet underground (unless he has kicked the bucket), so I’m pretty glad they changed that. There were also ‘X’s in the Coin and Star counters; removed because you can have over 100 of each, and the colors of the counters were gold instead of red or blue.

Well, that’s everything for Issue L. Here’s to another L issues of the ’Shroom! Look out for my special section, and, if you have a suggestion, PM Clover on the MarioWiki Forum. Bye guys, see you next month, and remember: don’t talk to Smasher.