From the Super Mario Wiki, the Mario encyclopedia
< The 'Shroom:Issue 172
Jump to navigationJump to search

Art by: The Pyro Guy (talk) and Ninja Squid (talk) 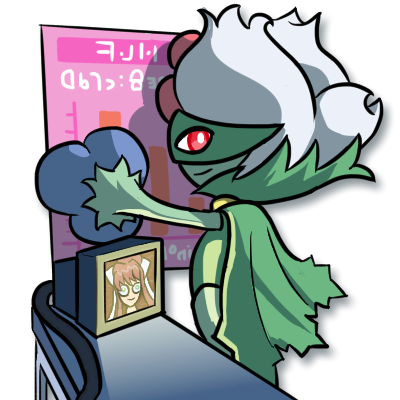 Oh, hello beautiful 'Shroom readers! I'm glad you were able to join me on this gorgeous July day. 'Shroomfest Round 5 has come to its close, and with it, the arguments over which colors to use for our painting! It was a close battle, but one side had to prevail, and you can read on to find out who it was.

Why am I standing on the street, instead of talking to you in the office? I've got to keep up the mystery of what happened to the 'Shroom HQ, of course! Make sure to check out the conclusion story to discover the fate of our beloved building, as well as a special message from the victorious team leader! Thank you all for your participation, and we'll see you for the next 'Shroomfest! 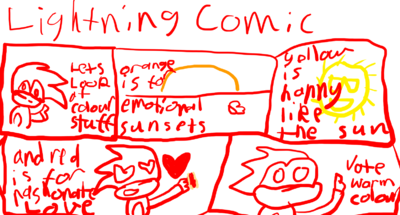 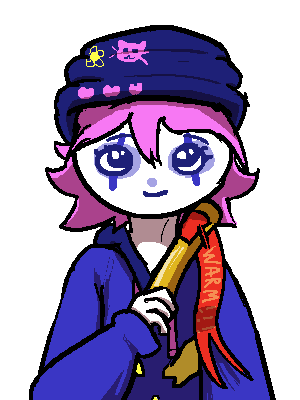 Good job. Also, as for red. Yes, it stands for blood. But it is actually not a bad thing. Blood is essential for animals and humans. It is what keeps them alive. And then there's yellow. That is the color of the sun that provides light to the world. The moon, the winner of it's thing, is gray and isn't either warm or cool.

What do you think? Your eye is always going to be drawn to warm colors. This also applies to cool colors too. That is, warmer colors will always stand out over cooler colors. So in this case, your eye is drawn to the yellow lips, the red skin of the vicious Piranha Plant, the warm brown fur of the timid Monty Mole, the yellow skin of the mighty Sledge Bro, the yellow eyes of the creepy Skeleton Goomba, and the yellowish lips of the persistent Spike. Even though Broozer and Dino Torch use an overall cool palette, you're still drawn to their warmer colors. Try as you might, you just cannot have cool overtake warm! 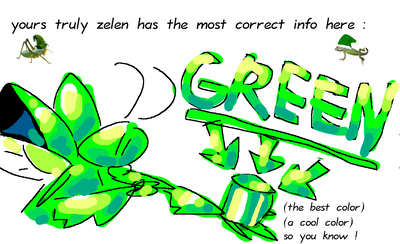 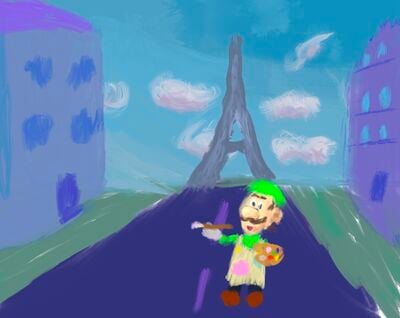 What do we call our planet? We call it the blue planet. And blue is a cool color. Also, what organism can withstand hundreds and thousands of years in the heat, cold, and thunder? Trees. And trees have leaves which give us the oxygen we need to survive. And what color are most leaves? Green, a cool color. So there.

Also from New Super Mario Bros. U, this is Cooligan Fields. Although this is a snow level as opposed to a painting-esque one, unlike other snow levels in the series, this one takes place at night. This is illustrated by a dark blue background, contrasted against the cyan-blue ice platform. The usage of the various shades of blue creates a relaxing effect, as if Mario is on a midnight stroll rather than chasing after Bowser, and the bright color of the ice attracts attention to it, bringing the platform to the foreground.

Here's some other points to bring up for cool colors: - In Super Mario 64, Blue Coins are the most valuable, being worth five coins each. In comparison, yellow Coins and Red Coins are worth one and two coins respectively. - 1-Up Mushrooms, which are green, are more valuable than Super Mushrooms, and are more helpful. - Neo Bowser City, my favorite Mario Kart course, focuses on blue and black, which are contrasted by neon purple signs.

In general, one of the reasons why I prefer cool colors is that I find them to blend in more naturally. I prefer the subtlety of cool colors to the energy of warm colors. I think that cool colors blend in much better with nature, such as with grass, snow, and water. 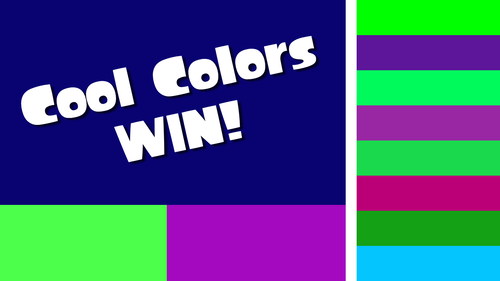 Nearly the whole day had passed thanks to Pitohui and Superchao arguing, the two of them spending their time trying to convince the artists, who the rest of the staff had rushed over from New Wikisburg, to support their side. By the time the sun was beginning to descend in the sky, Pitohui and Superchao had Ninelevendo and Reverse Input, respectively, by their sides, standing at a canvas and awaiting orders, the two artists having agreed to sketch the ideas of the Director and Shadow Director so they could present them to Roserade.

As the argumentative duos and their artists of choice discussed their ideas, however, one member of the staff was conspicuously absent. Ninja Squid had managed to sneak off unnoticed, and had gone over to hide in some nearby blueberry bushes, indulging himself by taking some of the berries as a snack as he settled in. Finally able to focus on his schemes in peace, he, in the cover of the bush, pulled out the Magic Paintbrush and set it on the ground in front of him, his tentacles quivering as anticipation filled his body. How much could he do with this prize...?

Before he could get too deep into planning, however, a voice called his name out, sounding serious. Not wanting to get caught, especially not with the brush, he quickly leaped out of the bushes, leaving the Magic Paintbrush behind, hidden where nobody would grab it. Soon, he found who was calling his name, encountering Lakituthequick, standing next to a large yellow... tank of water, FunkyK38 beside him. Lakiuthequick explained to Ninja Squid that, rather than listening to the pointless arguing of the Director and Shadow Director, he and FunkyK had come up with a plan of their own, retrieving the Hydrogush 4000 from an old warehouse. As soon as he could set up Quickbot to interface with the water pump, he explained, he, Ninja Squid, and FunkyK would wash away the graffiti and see if that restored the HQ.

While the trio discussed their plans, however, another trio was discussing a plan of their own, Hooded Pitohui recruiting Kirbyo and Mr. Y to aid him and Ninelevendo. With Ninelevendo needing some fruits to use as references for a still life, Hooded Pitohui sent the Kirby and the Yoshi off to pick some blueberries from nearby.

Soon afterwards, Kirbyo returned, not only with blueberries, but also with the Magic Paintbrush, saying he had stumbled upon it in one of the bushes he had picked blueberries from. 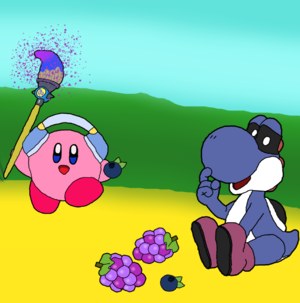 Immediately, Pitohui asked Kirbyo to hand over the Magic Paintbrush, and the Kirby obliged his request. Declaring the problem solved, Hooded Pitohui handed the Magic Paintbrush off to Ninelevendo and asked him to paint The 'Shroom HQ, inadvertently overlooking one important detail in the process...

Ninelevendo, already prepared to paint, gets to work, asking no questions, using the Magic Paintbrush to sketch up the paper's headquarters... with his palette of only cool colors. Thanks to the magic of the art tool, The 'Shroom HQ soon rose from the ground, looking just as it had before... save for its colors. The new HQ that rose from the ground only had shades of green, purple, and blue to its name, cool colors covering the whole building.

With the headquarters back and the Magic Paintbrush retrieved, Pitohui abandoned his plans of making a painting as ransom, instead urging all of the staff to rush inside the building and to ensure everything was left right where it should have been. With the rest of the staff following him, even Lakituthequick, Ninja Squid, and FunkyK abandoned their plans, the problem seemingly solved. Even Superchao headed into the headquarters with the others, Ninja Squid the only staff member reluctant to head inside.

To everyone's pleasure, the staff's inspection of the headquarters found everything in the HQ had been left just as it should have been, the now-recovered Magic Paintbrush the only thing missing. There is one change people quickly noticed, though... Thanks to the Paintbrush's magical effects, the whole building, having been painted with cool colors, was frigid on the inside. With just a day to go to the opening of their gallery, most of the staff ignores the change in temperature, though, quickly getting to work as Pitohui began directing the staff to put the finishing touches on the gallery.

By the time everyone scattered to get to work, only Pitohui, Ninja Squid, and Superchao remained together, and the three of them walked to the exhibition room together. Hooded Pitohui told the two of them that, to keep it safe, he would be taking the Magic Paintbrush and keeping it on his person, but, in order to keep the rest of the gallery safe, he assigned Superchao and Ninja Squid to guard the exhibition room together.

Soon, Pitohui had left with the Magic Paintbrush, leaving Ninja Squid and Superchao, two lovers of warmth, to shiver and suffer together in the frigid exhibition room. The two of them were left with nothing to do but to stand in the cold. Apparently, Ninja Squid suggested using a flamethrower to warm up at one point, but he was silenced by a glare from Superchao, who informed him that he was not going to clean up any more messes... 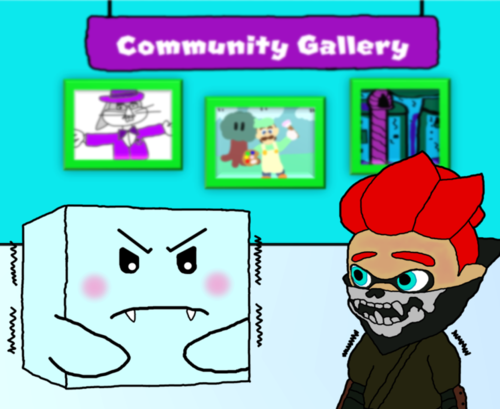 With some coats and... well, The 'Shroom HQ no longer had warm beverages, Anton's personal hot chocolate stash aside, so guests had to do without those, but, despite grumbling from Superchao and Ninja Squid, the gallery proved a smashing success when visitors came the next day!

'Shroom Research Lab: For once, it seems a complete story has emerged. The 'Shroom Research Lab has pieced together the story of how The 'Shroom's gallery came to be, but we're still searching for more information on the paper's history. Ninja Squid had his schemes foiled this time, but there's evidence suggesting he was involved with another event a few months after the HQ was restored... The 'Shroom Research Lab will continue to look through documents and piece this story together, so stay tuned for updates. 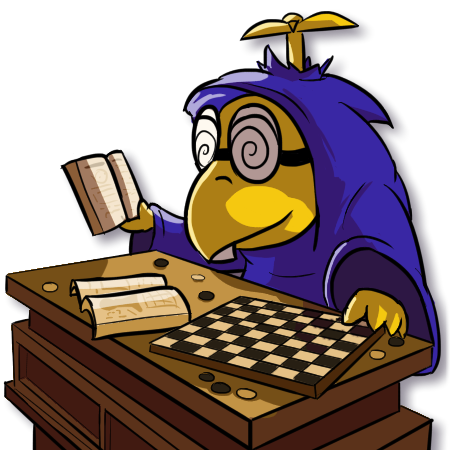 Maybe we should all go into a kitchen, because we not only can handle the heat, we can beat it!

I joke, of course. The 'Shroom's staff can't all enter a kitchen together. We can't take Alex into kitchens anymore, not after what happened the last few times...

Anyways, it seems that cool colors have prevailed! This is my first time here at the end of a 'Shroomfest, and it's not bad. Roserade will have to watch himself next time we meet. But it's not because of my efforts that we cool color supporters can enjoy this victory; this happened because of all of you who came out in support of cool colors. Whether you brought forward fruits, symbolism, frogs, insects, videogame levels, or paint or you took time to make a comic or to paint a picture celebrating cool colors, it was great seeing you all come out in full force.

But, I must say, it wasn't only cool color supporters who made this another great 'Shroomfest. Warm colors had their own share of supporters, and seeing the creative contributions offered by both sides was a blast. You all have a little bit of an artist's spirit in you, it seems! We've had five of these events now, and, for our sixth, we'll be moving away from this warm versus cool dichotomy from the last two. We're always experimenting and looking to make these even more enjoyable to participate in, so, please, if you have any suggestions, reach out to me, Roserade (talk), or Ninja Squid (talk) on the Wiki, the Super Mario Boards, or on Discord!

While you wait to see what's next for the 'Shroomfest, I'm off to paint the town blue. This Magic Paintbrush has more power than I imagined...