I say as their first appearances as bosses.Knife (talk)

Any1 else? Paper Jorge

First appearance as a boss would make the most sense. -- Son of Suns 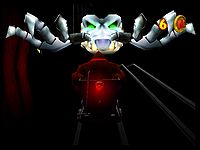 WHAT is this freaky boss? It's from DK64. 3dejong

Where is he found? Is he mentioned in the Player's Guide? Do the Kongs battle him? 3dejong

Hes found in the minecart track hidden in Fungi Forest, only DK can reach it. As for fighting him, you can't he just seems to kinda harrass you as you speed through a dark haunted tunnel. -- Sir Grodus

I think a good name for this guy could be Demo-Kremling. -- Sir Grodus

Should the game next to Kamek's name really be Yoshi's Island? The article introduction claims that "the first game in which they appeared as boss" is next to the names, but I wouldn't consider him a "boss" in that one; he appears in cutscenes and as an invincible enemy in some stages, but he's never really fought in a boss fight.--vellidragon 02:47, 18 November 2010 (UTC)

He was never a boss in the original game, just a coward helper to the opposing forces Yoshi must face. He never actually gets hurt or directly attacks until later games.

Anyone else have anything to say? Otherwise I'm gonna move it.

move 10-0
Well all I can say for this proposal is per what Xzelion said above.

The link to the list of final bosses just redirects to the same bosses page, FYI. User:DREAMYDARKBOWSER777 (I'm not logged in so I can't sign properly)

I know Cackletta's Soul is on the Cackletta page, but it's a seperate boss from Cackletta, so shouldn't it at least be mentioned?

Not any more separate than the two Fawful bosses in SS, really. And it's just called "Cackletta" in the game anyway. Doc von Schmeltwick (talk) 20:45, 21 August 2018 (EDT)

This page needs to change, I know this how all the list are on this wiki, but it sin't good to search for specific bosses, for example some guy ho wants a walkthrough to beat a boss, bu he doesn't know the name beacause the game doesn't say it. So I think the best is put the bosses separated by games and in fight order. Something like this:

I think the page is fine as it is now.