From The Legend of Zelda to Madden. These were made by people who didn't know where they were.

Bellum is the final boss in the game Legend of Zelda Phantom Hourglass. He has three forms: regular Bellum, Bellum ghost ship, and Bellum possesing Linebeck!

Boom Blox is a game based on puzzels like Mario Picross and Mario Picross 2.The only thing is,you have to break certain blox to beat the level.So it's also challenging.

Here's what wikipedia has to say. [1]

What follows is basically the Wikipedia page on Boom Blox circa May 2008 copied verbatim, save for a few spelling errors and the following "external link" at the very end:

Boom Blox at Wikipedia (by Mariofreak150)[2]

Dr. Heinz Doofensmirts is an eveil scientist man. his nemisis is perry da platypus and he owns doofensmits eveil ink.

("How in the world can somebody spell Doofenshmirtz but not evil?" - Pie Shroom (talk))

Godzilla is a dinosaur who pwnz!

Korto Momolou is an African American fashion designer. Her character appeared in Mario Kart Wii. Her character is believed to be one of Peach and Daisy's High school friends. In Mario Kart Wii, she made history as Nintendo's first black character. She is noted for her afro. It is belived that she will only be a kart character or she'll appear in one of the super smash bros games.

Legend of Zelda: Twilight Princess is a game where Link must save the Twilights from the Hungry Hungry Hippos

(I don't care what anybody says, this is comedy at its finest - AwdryFan1997(Talk))

Around 1992 a spanish software house ,toposoft made a DOS game called Luigi and Spaghetti in EU(europen union)The main plot has to do with spaice aliens taking over the world and military forces are no match.It is up to luigi to stop the aliens with the help of a worm named Spaghetti.Gameplay consists of jumping on alien eggs and smashing them and released imprisoned heroes.The game does not take place in mushroom kingdom but in real locations like egypt and italy.There are enemies such as mummies and characters like dracula and frankenstien.You can get hurt by enemies and the only way to avoid being killed by them is transforming into superman by finding an s icon.Some may think this game may not feature nintendo's luigi since this luigi isnt in mushroom kingdom and other mario characters are not included.It also features a strange plot that normally isnt in mario games.However,the luigi character seems to be an alternate reality version of nintendo's luigi.It has most characteristic's of nintendo's luigi with minor changes.For example,he wears blue and white overalls instead of blue and green.he also dosent have an L on his cap.However,the cap is still green.He also has a mustache and sideburns.Becuase of this, many believe this is the luigi from the mario games and not a different character altogether.

("I recommend you the sequel, Mario and the Lasagna. But it is not Nintendo's Mario. It just looks like him.")
("This is a real game, by the way. Let that sink in...")

Madden is a game not in the mario sieries that is football made by EA sports. 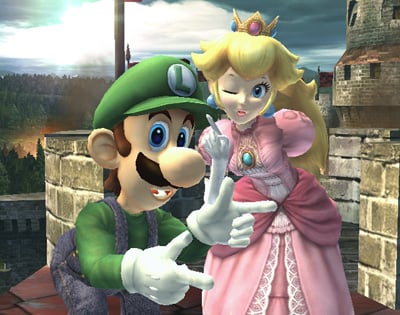 e can go anywhere he wants in seconds.

(Yes, the Hedgehog Bros., one fifty years older than the others and one from 1,000 years in the future and/or an alternate dimension. Everyone's favorite Luigi characters. AwdryFan1997(Talk))

Please CBS, put me on Survivor! My name is Bret and I applied in the open casting call for Survivor in Mishawaka, Indiana on 1-8-05, which was hosted by WSBT TV and Meijer. Hobbies: Weight Lifting - Biking - Running - Fishing

It was a cold morning, only 27 degrees when I arrived around 7:30 am, even though the Survivor auditions were from 10 a.m. to 2 p.m., so I could assure that I would have a chance. When I arrived and saw that the line was already considerable in size, and was glad to be there early.

I want to be the Ultimate Survivor, and I know I have what it takes to outwit, outplay and outlast in the game!

The picture to the right is of the line in front of me, and the one below is the line behind me. I made a nice panorama shot out of two pictures below, so you could see how long the line really was. Glad I wasn't all the way back there, because it was a long cold wait.

Surviving My Survivor Camera Auditions I wish I could do the Survivor audition tape over again. It was more difficult than you might think. After standing in the cold for three hours, I finally got to come inside and throw my coat on a chair and run up in front of the Survivor camera. I had hat hair, but so did most of the others. Please give me a call back so I can show you the real me!

I filled out my application flawlessly, or so I think. :) I still had my passport from when I applied to Survivor 2 in the Outback, so I am ready to go.

I have watched every episode from the very first show to now. My favorite shows on TV are Survivor, The Apprentice, and Fear Factor.

I am an experienced fisherman, and have been fishing since I was 5 years old. There are two small peaceful lakes by my house that do not allow gas engines, so I can enjoy long quite summer days bass fishing. My wife and son like to fish for blue gills, but I prefer a more challenging fish like bass.

On this mount is an 8 pound 24 inch bass I caught, at the lake by my house, on 8 pound line with a purple rubber worm.

In Survivor, I am willing to spend long hours fishing to feed the Survivor tribe. I am there to work hard and will not complain about it, like many I have seen on previous Survivor shows.

I have a gym member ship and lift weights 5 days a week. I enjoy distance running and 30 mile bike rides. Plus, have competed in several triathlons, which is usually a half mile swim, 26 mile bike, finished by a 6 mile run.

I was a new car salesman and received years of training classes on negotiating, and was consistently one of the top salesmen at the dealership. I have sales and negotiating to an art form, and have learned to make customers comfortable in dealing with me.

Now I design ecommerce web sites all over the country and even the world. I still keep my negotiating skills fresh by selling web sites instead of cars. Plus, working with computers allows me to work with my mind. I have great math skills and a terrific memory. I was tested in 2003 and found to have a 136 IQ Score.

I can use this negotiating ability and experience to win Survivor. I had applied for Survivor 2 the Outback, so now it is time for me to be choosen.

By building this web page I believe I am already outwitting and outplaying the other competitors before the game begins. Anyone could have used the Internet as their venue to be seen.

I am in the best shape of my life. I own my own business and can leave for Survivor at anytime!

I will eat anything! I will do anything! And I will win reward challenges, and become the Ultimate Survivor.

Thank you CBS and Survivor for your consideration and time!

(Eleventh article voted out and the eleventh member of the BJAODN Non Mario Content page: Survivor. The wiki has spoken. Tails777 (talk))

(I admire the dedication, and it's really sad that this was accidentally put on the Super Mario Wiki. - AwdryFan1997(Talk))