From the Super Mario Wiki, the Mario encyclopedia
< The 'Shroom:Issue LXXXVIII
Jump to navigationJump to search

by Super-Yoshi (talk)
Warning – This page contains harsh language. If you are offended by such materials, turn back now while you still can.

Oh shit son it's mothafucken TFP but you probably already knew that cause you clicked the link silly, but hold up we're gonna stop with the introductions right there cause I can't believe we made it this far it's fucken round 4 and we're gonna go live from the suburbs of wherever you are cause this review is gonna be the most fresh you've ever seen (awwww sheit). Today we're gonna be looking at the first 3D game which is in 2D and somehow they made its 2.5D and made out of paper. I dunno man this shit looks complicated, Mario gains the ability to flip shit. Okay maybe it's not that complicated, but shit son I'd pay to see someone flip from 2D to 3D and back again, that shit ain't even a magic trick. Damn, people be making money off of fucken anything these days, ya'll see this shit? (of course you have, man if I made that shit I'd be retired and chillen on the beach with my boy Frank the Fish) Ok you know what fuck you and them shoes we're gonna review this game now and I have no clue if I just made the worst possible introduction to a 'Shroom article or what.

One of the earlier Wii titles and damn good one, Super Paper Mario brought a whole new style of gameplay to our beloved series. It wasn't your traditional RPG, no no no, it was a sidescroller AND an RPG (like how the shit is that even possible, man). I remember I was going to pick this game up and I was like snap son its the sequel to the sequel and I was all hyped and shit and then I pop in the disc and I see lines. Like etch-a-sketch shit man, everytime something would load this shit would have like 2 lines drawing out some bullshit. They wanted to try something new and we took it for breakfast, but shit the lunch was terrible. For real though, when I first saw this game I didn't think it was gonna be that good, then all of a sudden ho snap, they mixed this so well together the kid who thought peanut butter and jelly went good together got their mind blown. Like daaamn, it was like eating soul food that was so good at the...shit I don't even know where I was going with that I just wanted to make a funky fresh rhyme (hey, here we go again! turn it up my friend).

Is this you? I hate you >:( just kidding this is me too

So we start out in the good ol' home and some shit goes down about a wedding, Bowser does his thing and all of a sudden you get knocked the fuck out cause you drank too much of that brown (or black, man what the fuck do people even call alcohol, let's just call it fucken alcohol), some depressed fucker who lost his girlfriend shows up to the party and somehow you took enough drugs to believe that you woke up in some pixelated inner-dimension that's probably just Subspace all over again and a homeless person asks you to find him this new drug in the shape of hearts. Not knowing the difference between Skittles and whether tasting the rainbow is actually a thing, you set off on the journey to try and have the best night ever. Along the way a deported man from the suburbs of New Mexico teaches you how to properly use Skittles and a whole buncha shit happens, from fighting a computer dragon (made of real dragon) to starting drunk brawls with an entire race cause fuck the police.

I really love the gameplay in Super Paper Mario, it's like playing a classic inside of a a masterpiece. The graphics are really well polished for a buncha pixels and the action packed storyline always makes you want more. There's a few problems though: there are no badges nor upgrades to things such as the Super Hammer, but these are fine because of the other mechanics included within the game. You can play as generic guy, fruit boot, fat cat, or fuckin luigi man, and as for partners, there are these strange little things called Pixls. Some are badass, some are just as high as you, and some make me wonder why do you even exist. Everyone has their own thing: generic guy can flip to reveal hidden things or access parts otherwise inaccessible from 2D -> 3D, fruit boot can slowly hover down with her divine rapier and when her heels hit the ground it sounds so pro like shit son i want to wear heels and do that, fat cat breathes fire and fuckin luigi can fly into the skies cause hes fucken luigi man. There is no Star Power like in the previous installments, and instead of different areas such as Petalburg, there are instead 8 massive worlds spanning 4 sub levels, and i'd say each has surprisingly enough game time to be considered an actual chapter from the first or second Paper Mario games. One thing I found neat about this was the concept of Catch Cards, if you collect more of them, you can deal more damage to the enemy. It's an improved version of the Tattle Log since not only does it give you info on the enemy, it provides you with an advantage the next time you see it. However I would say this would definitely not work in traditional Paper Mario games, as there's already enough gimmicks such as Bump Attack Badge and the fact that there aren't as many enemies in a room, whereas in SPM there are hordes of them everywhere. There is also no level cap in this game, at least I'm pretty damn sure, but who would even want to reach level 999 anyway, right? Right? 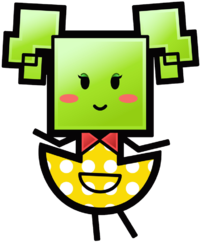 Damn girl can I have yo number

I really love the characters, places and the items in this game. Some of the characters are such oddballs like that lonely nerd, while others are the new Fawful. I really like how things like Shooting Stars made a reappearance and the new Shroom Shakes were cool too, not only did they replenish HP, they also cured poison which is always an added bonus. The idea of a city mirrored with itself and the inclusion of not one, but TWO Pit of 100 Trials was great, when you beat the first one its like "yea man that shit was ez" but ho man when you go to that second one, shit gets real. There's even a sick arcade where you can play sick games for sick tokens. This game has a little bit of everything for everyone, some people might want to collect all the Catch Cards, others might want to make all the Recipes, and some people just want to kill things over again in chapters they've already played. I dunno man, just do whatever floats your boat.

OH SHIT WHAT THE FUCK IS THAT

This game has some really great music tracks, everything fits in perfectly and it sounds really good. My personal favorites are probably Sammer Guy's Kingdom and the Final Battle tracks, but everything sounds so nice and it's pretty much ear candy. Sound effects are as polished as always, everything's on queue and it feels natural. There's nothing really to say about music tbh, every song is amazing and mixed together so well. You have slow tempo songs to fast paced songs and it packs a real good punch when you listen to these. I guarantee you that you'll probably go on Youtube or something and listen to a song again after or idle in a place just for the music.

In short, Super Paper Mario easily delivers a well balanced clash of classic side-scrolling action and RPG elements blended well together. The vast amount of quirky characters, new gimmicks, amazing story, and even smaller things such as humor make this really high up on my top Wii games list. I'd probably give this a 9/10 because of some flaws mentioned earlier and because it's not a "true" Paper Mario but still a very good one.

Well, that covers all the Paper Mario's for now, if I ever do a guest section again you can suggest me to do other series or maybe I'll just wait out til the new one comes out :p I hope you all enjoyed my review, and until then, seeya around!