Hello, and welcome to the March Issue of Upcoming Games!! I've come back to tell you a little more about what Nintendo has in store for us Mario fans, following my absence from the previous issue, so let's get started!

As was the case in January, I'll be covering only one Nintendo Direct conference – the first one for 2014 – in this issue, which was broadcast worldwide on February 13th.

The first Mario game shown by President of Nintendo Satoru Iwata was Mario Golf: World Tour. He presented an overview of the new single-player mode, Castle Club, as well as ways to customize your Mii character with items such as clubs or balls, similarly to Mario's previous sporting installment, Mario Tennis Open. The game is scheduled to be released in Japan on May 1st; in North America and Europe on May 2nd; and in Australia on May 3rd. 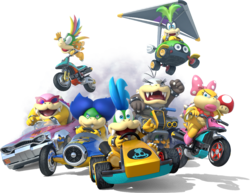 Afterwards. Mr. Iwata talked a little about Yoshi's newest adventure, Yoshi's New Island, showing fans some of the special items and power-ups in the game, aside from the classic collectible items that will return from the previous titles in the series: Red Coins, Smiley Flowers and Stars. Yoshi's New Island will be released in North America and Europe on March 14th, while Australian fans will get the game a day later, on March 15th.

The next game featured in the conference was Donkey Kong Country: Tropical Freeze. However, only a trailer was shown, as the game was nearing its release date for most of the main regions. It was released in Japan on February 13th; in North America and Europe on February 21st; and in Australia on February 22nd. Brazilians (this is unbelievable) are expected to get the game on March 20th.

The first eShop title unveiled by Mr. Iwata was the sequel to December's NES Remix, NES Remix 2. It'll feature new challenges, both classic and remixed, from later NES games, such as Super Mario Bros. 3 and Zelda II: The Adventure of Link. Additionally, a new mode called Super Luigi Bros. will be included. Said mode is based off a challenge from NES Remix in which players are tasked with clearing a Super Mario Bros. level with Luigi, running from right to left; however, all 32 levels in the game will be playable this time around. NES Remix 2 will be released in Japan on April 24th, while North America, Europe and Australia will get the game on April 25th.

Last, but not least, a new trailer for Mario Kart 8 was shown, revealing not one, but seven new characters: the Koopalings. Larry, Morton, Wendy, Iggy, Roy, Lemmy and Ludwig will join the other racers as the game hits shelves in a few months. Mario Kart 8 will be released in Japan on May 29th; in North America and Europe on May 30th; and in Australia on May 31st.

Satoru Iwata announced, on January 29th, at Nintendo's financial results meeting, that the company currently has plans to release Nintendo DS games on the Wii U Virtual Console, although he did not provide further details, such as which titles would be playable. At a later date, during the aforementioned Nintendo Direct broadcast, he announced that Game Boy Advance games would find their way to the Wii U Virtual Console, with some of them set to be released in April. Two Mario titles were mentioned in the video: Mario & Luigi: Superstar Saga and Yoshi's Island: Super Mario Advance 3.

North America got only two of those titles; Mario Bros. was released for the region's 3DS Virtual Console on January 30th, while the Wii U Virtual Console got a new addition in the form of NES Open Tournament Golf on March 6th.

Lastly, Japan got a single title out of those six; Wario's Woods was released on the Japanese Wii U Virtual Console on January 29th.

And that's it for now, everyone!! I hope you have enjoyed this issue!! See you next time!!!