Aw snap, you know who it is! It's your boy TheFreshPrince aka Anti-Malware Man aka S-Y aka 2fast2fresh aka pirplemontage aka ok I'm done, bringing you the daily fresh chronicles with round 3 about to start up in here! I brought Paper Mario: The quest for finding useless stickers and getting stuck for hours having no clue how to beat a boss or advance in the game last time, and the awesome classic that started it all way before that, so this time I'm gonna rewind back to 00's again and review Paper Mario: The Thousand-Year Door! 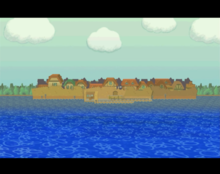 2004 was the year this came out, and damn was this game a somethin to talk about! The Thousand-Year Door was pretty much another grand tale similar to what its predecessor on the N64 gave us, and boy was it huge. Like this shit right here man, it made it seem like Paper Mario was some type of ordinary drug dealer, and then The Thousand-Year Door was the mothafuckin' don (pianta). The second of the series, this took previous elements from Paper Mario and refined them further for a full-fledged gaming experience. I was like damn, how could they have made an already good game even better! Seriously, whoever thought of immersing paper characters in an open 3D world is an outright genius. But, y'know, the genius could have had better days. But anyway, let's get down to it and review one of my favourite, most freshest game of all time! 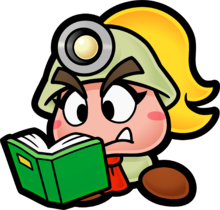 YOU HAVE NO HANDS! HOW ARE YOU HOLDING THIS THING

When the intro starts off, we see girl in pink dress buying some sort of strange box. Now I know exactly what your thinking, it's Peach, doing something kinda suspicious, unattended, etc. Well you're exactly right! Yes, she does get kidnapped again, BUT, it's not that one big lug, no no no, instead it's a bunch of pinner alien midgits. Seriously man they ain't shit, they're smaller than Peach, and I mean she got moves in like Smash Bros., so why couldn't she defend her damn self? Whatever, shit, nobody knows what goes on in that mind of hers. Anyway, before all of that, she managed to open the box and find a Magical Map and sends it to Mario for him to go on a treasure hunt. But who knew this treasure hunt would mean whether the world would be covered in eternal darkness or not? Mario comes to the slums of Rogueport, and after meeting and saving a Goomba that doesn't take anyone's shit, they meet up with funky glasses dude and enter the town's sewers to learn more about the tale of the map, and eventually stumble upon The Thousand-Year Door, which is said to hold a great treasure. From there, our heroes minus funky glasses dude ( sad, I know =( ). Unambiguous to Peach's kidnapping, Mario sets out to find the stars needed to open the door, he's probably like "aw yea imma have some fun finding this shit", but oh man, the plot of the game has its twists and turns and so many other things that I can't even describe, its a really nice and epic adventure at that. 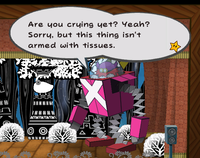 Good ol' classic RPG elements from the N64 title remain almost the same here, but a few things have changed and improved. For example, in battles, Mario can use two types of guarding now, the regular Guard which negates 1 damage, or Superguard, which DEALS one damage back to that one fool that tried to attack you. Now you might be saying, "TFP why would you want to use regular guard when you can become invincible with that other type?" Well, the Superguard is REALLY hard to time and master, of course it wouldn't be as bad with enemies like Goombas or Koopas, but when some punk ass kids use shit like lightning bolt on your ass or breathe fire, that's a whole notha level of mastery. They did remove something I really liked in the first one, which was the Spin Dash, I don't know why but I guess its ok since you get a partner later on that lets your "run". Typical elements like Star Power and Flower Points are still here, and they also added something called "Bingo!", which gives you random cards if you execute Action Commands properly, and you can try your luck to match 3 of the same to refill some of your entities, but watch out, lining up 3 Poison Mushrooms, oh boy, you don't even wanna know what happens. Many new badges and recipes were added as well, and new types of boots and hammers, man, there's just too many things. The level cap was removed in this too, so you can keep levelling up and increase each of your stats. I personally recommend Badge Points, cause you can never have enough of those =)

Mario looks calm in the picture, but this is actually how he's feeling

As for music, holy shit man, I can't get enough of this soundtrack. I remember whilst playing through the game I'd be humming to myself, hell, I even downloaded the entire OST, and I rarely do those type of things. Everything down to sound effects, its pitch perfect, I wouldn't change a single track, every one is so memorable and creates a vivid image that makes you sometimes just wanting to stay in that area just to listen to the music. My favourite one would probably be the X-Naut Fortress, its so techno and catchy, I couldn't get it out of my head for days. But damn, theres something for everyone here, its a mix of so many types of music, composers knew what they were doing and definitely made another mark in video game history with this beautifully composed soundtrack

This game is overall just traversing around in your paper form all around just like the previous game, keepin it fresh wherever you go. Some nice overworld things they added were mothafuckas that curse you n shit, but its not really a curse, it benefits you in the playing field. You can turn into an airplane, boat, tube, and just flat out go thin (no pun intended) so if you ever get caught and go to jail, call up one of the homeboys in the chests to "curse" you so you can be escape! This also introduced the dreaded Pit of 100 Trials, and oh man, was that a challenge, it was harder than the final boss! I spent so many hours trying, grinding, relaxing, all cool and getting good items to clear this fool. When this one bone dragon, he was up to no good, started making trouble in sewers (ok I can't do this lol). But yea, it's seriously like the ultimate test for Paper Mario. If you can clear that, you can certify yourself as a true master of the game itself. My favourite thing that they added was that between interludes of chapters, there was this "Super Bowser Bros." type of deal (kinda like how you played as Peach in N64, well you still do in this one but its kinda boring). Bowser's was so much more badass, pretty much you play as Bowser and you run through some classic Super Mario Bros.-esque levels tearing shit down, including your own henchmen. This guy does not give a fuck man, Bowser will destroy anything in his way, you just gotta eat the meat man, keep eating until there's no more left. 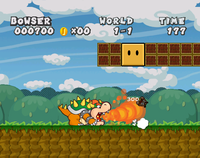 Paper Mario: The Thousand-Year Door is probably my favourite Gamecube game, next to a bunch of things, but hey, its really well developed and you can definitely see the heart, soul and amount of effort they put into it. If you haven't played it yet I highly recommend you do, this game is a solid 10/10, I could replay it right now and I wouldn't be bored of it. I think I've already played through it like 3 times now, so you could see the replay value right there =P

I hope you all enjoyed my review, have a happy holidays everyone!