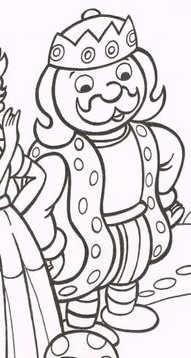 however, He does seem human in this picture.

I think that is a crown on his head, not a mushroom cap. I'm not sure though; I've never read the comics. This info comes from Wikipedia. -- Son of Suns

I never read the comics, either. HK

He looks human here in the coloring books, however. HK

He's definitely human ,or human-like, in the Valiant comics (except for a brief period when he's a chameleon). In "It's Always Fair Weather" he removes his crown; he's bald underneath. He's the nominal head of the Mushroom Kingdom, but Princess Toadstool seems to run his privy council and make the decisions -- when she loses her "official royal crown," she fears she'll miss the "annual re-coronation ceremony" and be ineligible to be the princess for a whole year.

Is there an official source for the name "King Toadstool?" It sounds like a back-formation from Princess Toadstool to me, and not a very good one. Even if Toadstool was a component of her name -- and I'm not sold on that -- it wouldn't have been a part of her name that she'd share with her father. Royalty don't use last names; the Commonwealth head of state is Queen Elizabeth II, not Queen Windsor. --Toadstool Forever 12:34, 24 March 2007 (EDT)

I'll have to check, I have a boatload of unread comics, he's usually just reffered to as "The King" most of the time in them though; if I find a mention of his actual name though, I'll put it here. -- Sir Grodus

Yeah, I checked through my comics and some of the Nintendo Adventure Books, and I don't think he's ever called King Toadstool. In fact, I think the only place where he's given an actual name is the official novelization of the Super Mario Bros. live-action movie, where he's called... King Bowser. -- Sir Grodus

Here you go: he's called the "Mushroom King" in the Valient comics: Super Mario Bros. "trading cards" front and back. He's listed as the king of "Mushroomland", but on Mario's card they call Mushroomland the Mushroom Kingdom, so I think that takes care of a couple things. Stumpers! 21:29, 19 December 2007 (EST)

Hey i've been on hols 4 a week and then when i return thers a load of controversy on his species! Too right Hk, hez a stumy Toadman. User:Georgedrake Z

The only game appearance to date.[edit]

Though this comes from the player's guide, this is clearly in the style of Japanese artwork, so it likely came from the Japanese manual. There are what appear to be a Mushroom King and Queen, wearing Toad hats / crowns (!), and guards with spears like we'd see in later games. And Peach here is wearing a Toad cap as well! Still, this seems pretty official. Wonder if the royal couple were murdered... why else did they disappear from continuity? LinkTheLefty 13:17, 17 August 2009 (EDT)

More likely from a Japanese game guide translated into English rather than the manual. The almost only reference for artists besides the games was the Japanese game package of Super Mario Bros. then (read part 4 "My First Project" here). But even there Bowser and the Princess look very different from these depections. It looks like as if the pixel art of the game was the artist's main reference. If you want to see the small art that actually is in the Japanese (and Western) manual, look here (it is compared to the manual of The Lost Levels). By the way, I think the female person in the first picture is also Peach rather than the Queen, since she looks like the Princess on the second page and the text never refers to a Queen. --Grandy02 14:28, 17 August 2009 (EDT)

The page was likely "forgotten" as the Mushroom King is an obscure characer and his actual appearance in the movie is very short. If you think there should be split for consistency, suit yourself. It's not like there's anything forbidding you from doing it. --Glowsquid (talk) 21:40, 11 December 2012 (EST)

I think it should be given its own article like all the other main SMB movie characters.

canceled by proposer
All the other film characters were split from their respective main counterparts. Even though the Mushroom King is primarily a character from the comics, he was still mentioned in an instruction manual and some early game material such as "How to Win at Super Mario Bros.", so he's still technically a game character. To match the other articles, his live action information should be separated as "King (film character)", since the only name given to him in the film itself is "The King" in the credits.

a main proposal established the film characters should be split from their gaem counterpart. no need to go through the TPP process. --Glowsquid (talk) 20:26, 24 January 2015 (EST)

I thought Mushroom King was left alone before on the basis that it wasn't considered a game character? Unless I'm mistaken. LinkTheLefty (talk) 20:31, 24 January 2015 (EST)

There's nothing in the proposal, this page's edit history or this talk that the page was purposely left alone. More likely, he's such a minor character he got forgotten. --Glowsquid (talk) 20:37, 24 January 2015 (EST)