Changes between the original DS game: The teleportation hole is red The title theme is different The sounds and music are much more realistic Fawful seems to have a new voice actor Cutscenes are done in 3D The battle intro syncs with the battle music's intro where a star spins and shows the battle on the lower screen The game is way easier to understand as icons show the right command inputs to counterattack Level Up Screen is the same as Superstar Saga + Bowser's Minions Bowser seems to have 5 Ranks instead of 4 When Bowser pulls the island with Broque Monsieur, a flow of water remains on the standard land Fire Sparks and Swirls are depicted in the Flame Pipe If you counterattack by Jumping on Scutlet's tounge, the tounge becomes squiggly Even though not translated, there are some options regarding Special Attacks The sparks that Mario & Luigi hit in the Arm Muscle minigame is modeled after Suns for Mario and Saturns for Luigi.
The preceding unsigned comment was added by ‎Awesomefan135 (talk).

The Broque Monsier Battle is Shorter & you only inhale him once & the battle ends after that.

A Map is seen at the Top or Bottom Screen (with a small circle showing the characters) when you play as Bowser or the Mario Bros while inside Bowser.

The preceding unsigned comment was added by M&L Fan (talk).

The emergency guard was added for Mario and Luigi (using the Y button).
The preceding unsigned comment was added by Hugonche (talk).

In the reveal trailer shown in the Nintendo Direct of 3/8/18, Bowser Jr. isn’t wearing his mask on his body when he is seen rolling on a Blorbed person, while he has it in the cutscene of the actual game. Is that technically a beta element.
The preceding unsigned comment was added by Prpro=03 (talk).

It would probably count as pre-release and unused content, not a beta element, as per MarioWiki:Good writing, "Beta" refers to the period in software development where a product is feature-complete, but has yet to be extensively bug-tested or optimized. This usually happens long after things like concepts being rejected, characters being cut from the game... etc. "Beta" should not be used as a shorthand for "things that changed during development". More precise terms such as "cut," "unused," "concept art" or simply "early" should be used instead. Of course, this does not apply if the information is confirmed to be from an actual beta build. So unless we know that the fact that Bowser Jr. is not wearing his bandana is from the specific beta phase in development it would be better to classify this under pre-release and unused content. Doomhiker (talk)

Can we get the different statistics for all the enemies and bosses as soon as they are known? They are known currently to be different from the DS version
The preceding unsigned comment was added by 86.128.56.90 (talk).

We can, it may take a while due to the fact that the game just released in Japan, and once they are known they will most likely be added to either this article or the enemies's articles. Doomhiker (talk)

I may add a page on these guys soon, given they're the main villains of Bowser Jr's Journey. They're the group of three mysterious characters shown here: 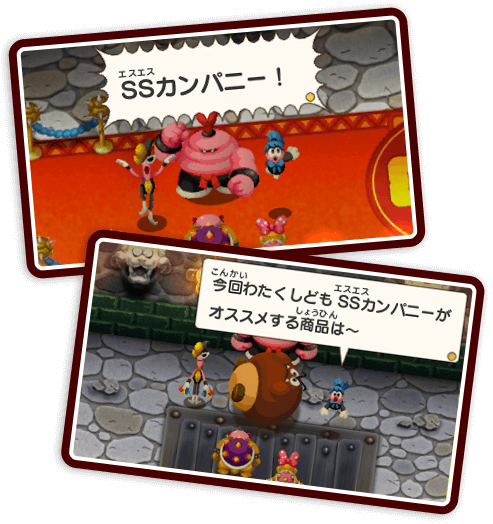 And consist of Sulimu (guy with yellow tie), Muchio (big guy) and Kyutto/Kyut (blue haired girl). They're a pharmacutical corporation that apparently promises a cure for the Blorbs, but turn out to be working for Fawful instead, and merge into that giant monster seen in the bosses video for the final battle.

Not sure if that's enough to start writing a page here yet, but that's what translations have said so far, and it's probably gonna be the subject of an article on my gaming news site at some point too.

I would wait until the game releases in english.

In the English Version they are The Best Fitness Friends.
The preceding unsigned comment was added by M&L Fan (talk).

How did you know that.
The preceding unsigned comment was added by M&L Fan (talk).

Was going to say the same. Here. https://m.youtube.com/watch?v=7YI-Djqs0gM Best Fitness Friends is a cover name.
The preceding unsigned comment was added by 72.200.164.50 (talk).

I just got the game and unless i'm mistaken I think I found an error. In Dimble Wood, Bowser Jr. gets caught in Bowser's suction (Bowser is not shown) as they had just eaten the vacuum shroom, and then in the next level (I'm pretty sure you have to clear the previous level to get to it) Fawful is talking about how he's planning on tricking bowser into thinking he won a lucky shroom. which going by the previous cutsene should have already happened. Pikmin theories (talk) 20:55, 11 January 2019 (EST)

It actually is, but now there is a difference. As you progress through the game including Bowser Jr.'s Journey, music will be added along with original music. MarioGamerFan24 (talk) 14:27, 12 January 2019 (EST)

Game just came out, so it'll be added when someone gets around to it. The Bowser's Inside Story plot is the same as the original game, and I think Bowser Jr.'s Journey revolves around Bowser Jr. trying to figure out where Bowser went.

Yeah, and in fact, I’ve played the entire game myself, but I was just curious for their sake... I’m terrible at starting up new sections, so I’ll let someone like Mister Wu or another prolific member work with the initiation. Thanks for the heads-up! PianoKing03 (talk) 01:50, 14 January 2019 (EST)

It is known that the enemy and boss stats have been changed for the 3DS remake, so I'm just asking where this information comes from or if anyone is able to look into the game's files at this point in time and start adding to this game's bestiary. I am aware of Dark Bowser's HP is now 1260, but other's I do not.
The preceding unsigned comment was added by BlazingPhoenix (talk).

So, when anyone is up for the task, can you add it to the Media section, please? I'm currently not allowed to edit this page. --

Way ahead of you!

I can't believe I had to check the recent changes page after posting this to find out that it already was there. --

Well, I literally added it within a minute of you posting here, already having the mindset that it needed to be in the mainspace as soon as it was uploaded, since that's just we do things on the wiki after all.

Just a suggestion, I was wondering if perhaps we could remodel the list of changes section a bit, maybe make it a bit more divided. I know that it is already classified into sections like gameplay changes and visual and audio changes and stuff like that, but I was thinking we could move some details around into different categories, specifically a "Bros/Brawl Attack" section. Refer to the Mario & Luigi: Superstar Saga + Bowser's Minions article, for example (Items, badges, puzzles, minigames, etc.)

I feel like this will help MarioWiki users to better find the changes they need. Please let me know ASAP, as I'll be more than happy to get started on this.--WigglyWiggler (talk) 16:46, April 29, 2019 (EDT)

When Mario rescues Starlow and when both Mario and Luigi unlock hammers, the jingle used when Bowser gets the Vacuum Block is used instead of the regular item get jingle.
The preceding unsigned comment was added by 107.4.8.129 (talk).

Hey guys. I've been working on the "List of changes" section a lot recently, and I think I did a pretty good job. But I know that there are some changes that I'm missing, so if there is anything that happen you notice, please put it in this section and I will check back and add it to the article. Please be sure to space between sentences so I know how many there are, and don't make any suggestions about changes that have already been added to the article. --WigglyWiggler (talk) 18:51, May 10, 2019 (EDT)

Can someone who has experience with coding start working on List of clothing in Mario & Luigi: Bowser's Inside Story + Bowser Jr.'s Journey? I would do it, but I don't know anything about coding. Fawful (talk) 13:40, July 15, 2019 (EDT)