Uhm, not entirely sure. I only have a German manual for Super Mario Land, where it says "Unbesiegbarer Mario" (translated: Invincible Mario). / Time Q 21:03, 2 August 2007 (EDT)

Have't you noticed that the "flashing" only is in evidence in "MK:Double Dash!" when the characters only flash gold,but in ALL other games,they color-change.--Xterra1 09:24, 4 August 2007 (EDT)

The picture of SMW - it doesn't look like a proper screenshot. Maybe it's just me, or maybe not. What do you think?
Young M. Luma

What do you think is wrong with it? -

It looks way waay too smooth to be an actual screenshot of the game. It kind of looks like something a flash animation would use...
Young M. Luma

Good, someone added a new picture. The abyss picture should probably be replaced, too... I'll see what I can do. (If I remember to.)
Young M. Luma

Screenshots that look like that were taken in an emulator with a GFX filter activated to make things look more smooth at a larger display size, so they are "actual" screenshots. I do agree though that screenshots with a filter shouldn't be used, as they don't show things how they actually look in the game when played on a real console.--vellidragon 15:28, 14 September 2010 (UTC)

I think this should be changed to Star Mario, because too many things can conflict with 'invincible mario'. Like for instance, Rainbow Mario is invincible, as well as metal mario and shell mario and other things too. Wiiboy4ever 22:20, 25 May 2011 (EDT)

Has anyone noticed that this artworks of... 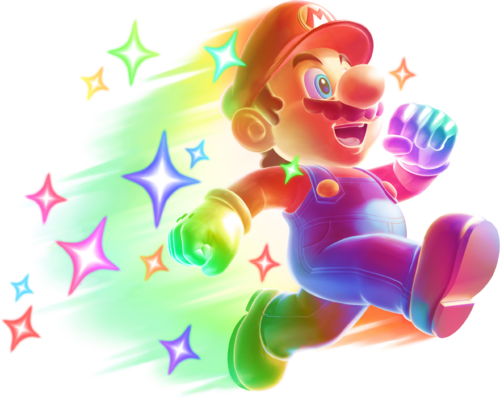 ...are completely the SAME IMAGE!

Basically Nintendo didn't bothered to make a new artwork for Invincible Mario for New Super Mario Bros. 2 and recycled the artwork from New Super Mario Bros. Wii. I guess we should get rid of the image with the lowest quality, of course that's the left one, and only keep the right one, because there is no sense on having the same image with different formats or quality.