Please keep the above notices in mind for future uploads. Remember also to select a license from the "Licensing" drop-down menu on the upload page and add where you got the image from in the summary.

Final reminder for this; remember to fill in file information or you may receive a warning.

It was not just the Pirate and Cowboy outfits that changed, but also the Astronaut from Super Mario Land 2, The Tuxedo based on Super Mario All Stars (though now the outfit uses the Tuxedo outfit from Mario Paint instead) the Top Hat is still from Super Mario All Stars though, The Mario Paint Overalls are used but the beret is from the Mario Artist minus the "M" logo. Now that I think about it the Cowboy Hat does look very different so I will agree with it having no reference for that one, but i am agree with the yellow hanker chief being a homage to the original game since it's yellow just like that game. As for the pirate it still has some parts from the original but with better design but I will let the staff decide on that one. As for the invisibility Cap it's pretty obvious that it's a homage to the Vanish Cap because it's one single cap that makes you invisible (your just simply transparent in the clothing change menu) it doesn't have to be an N64 Mario model to directly reference that power up even if it can't be seen. If you disagree or have a problem with all this I will be talking to the staff about this issue. Gamermakerguy

Actually, the Invisibility Cap is clearly NOT a reference due to it having a different name (it would be called the Vanish Cap). Downplaying the fact that it doesn't use the N64 model is pretty disingenuous, too, because if they went to the effort to make the Metal Cap outfit be the actual model, they wouldn't completely change the Vanish Cap to be actual invisibility. They'd use the N64 model. The fact that both follow the theme of invisibility doesn't mean one is a reference to the other. The other outfit differences you brought up are not really comparable to the Cowboy/Pirate ones. A few minor changes =/= completely redoing it. The amount of differences between SMO's Pirate/Cowboy costumes far outnumber the amount of details that stayed the same. Of course the Pirate hat is going to look similar; it's a pirate hat. "B-b-b-but there's a yellow neckerchief!" doesn't somehow completely undo the fact that the rest of the Cowboy outfit is completely different than the Mario Party 2 outfit. It honestly feels like you're just trying to find some sort of reference in every outfit SMO has to offer, even when it simply doesn't exist. Two things having the same theme doesn't automatically make one a reference to the other, especially when so much has been done to differentiate the two. If we're going to resort to massive leaps in logic just to find some sort of dumb reference in every costume, you might as well say the Boxers are a reference to Superstar Saga's intro where Mario's in underwear, and they just "changed the design" from briefs to boxers. Or the Caveman costume is a reference to the Super Mario World cartoon or Super Paper Mario because they both had cavemen in it, too. Or, hell, the King outfit is a reference to that king from SMB3 that resembles Mario. You can find a connection anywhere if you just completely disregard the actual outfit's design and just look at the theme. - Burb

I never referenced every costume such as the clown, football gear, snow hood, resort hat, sailor hat, boxers etc. I am not finding every reference for every costume then you think. Did I even say the boxers are a reference to MLSS? Well of course the caveman outfit isn't going to be a reference to the Super Mario World Cartoon and Super Paper Mario because mario never wore that outfit at all. The SMB3 Kings have nothing to do with the Kings outfit at all. At least the reference I choose are not as redundant than what you are comparing. This also didn't answer my questions about some of the outfits having the updates like the Tuxedo outfit from Super Mario All Stars, The Space Suit from Super Mario Land 2 or some other ones. Of course they can update the costumes this is the modern era not the past era. Most costumes are obscure references to past Mario games while some of them are brand new. Also next time to please use a Colon (:) in the beginning of a new sentence and keep adding a another each time you make a new message and vice versa and also a proper signature https://www.mariowiki.com/Help:Signature Gamermakerguy

No, the "references" I compared to yours were pretty on-point with how ridiculous yours were. Like, you genuinely think that the Pirate and Cowboy costumes that don't resemble their Mario Party 2 counterparts in the slightest outside the same basic theme and a yellow neckerchief are references in spite of that, and you also think that the Invisible cap is a Vanish cap reference even though we have two other SM64-based costumes in the game that went above and beyond to make it clear what they're referencing. Yeah, it's totally plausible that they'd just decide to rename Vanish Mario and make him look nothing like he did in SM64 while keeping the SM64 model for Metal Mario. The idea that Peach's explorer costume was also a Mario Party 2 reference was equally ridiculous, by the way. It was a generic explorer outfit. The point about "updating outfits for the modern era" makes no sense, seeing as how there's even older costumes in the game that were barely touched up at all. The Golf outfit doesn't look like anything real golfers wear, yet it remained exactly the same even though they could've given it the same treatment. Fact of the matter is, the Pirate outfit doesn't resemble the MP2 Pirate outfit whatsoever, and outside the yellow neckerchief, the Cowboy outfit doesn't resemble its MP2 counterpart either (you even acknowledged this yourself). No, the fact that they're the same theme doesn't make it a reference. And since you decided to give me some advice on signing posts, I'd like to do the same- In case you forgot, you originally didn't sign your first message at all, and just added it in later. Kinda funny, too, since it's a bit obvious that you made sure to edit that it so I couldn't point that out in my retort. Unfortunately, I remembered that blunder. Sooooo.....in the future, you should probably try to make sure you take your own advice before giving it out. ;) - Burb

Heard there's been some confusion here, so I'm going to try and sort it out.

I hope this third opinion helps (and that I covered everything). It is possible that Nintendo updated the suits, since it's been a long time since Mario Land 2 and Mario Party 2, but at the moment, there's nothing solidifying those claims. We can make a note that Mario has worn a similar suit before, but until there's official statement saying otherwise, we can't be certain that claiming these as direct references are true.

Dr Mario also originally wore just a coat but then he got a tie starting with Dr. Mario 64 but that was in the past and also a bit minor but so were some of the other outfits in Super Mario Odyssey. But the best I can probably do is contact Nintendo for a question of these. Gamermakerguy

Adding a tie to Dr. Mario's outfit in a completely different game isn't comparable to changing up these other outfits completely. The comparison is completely absurd, as is the notion that these are "updated designs from Mario Party 2". Dr. Mario's outfit still basically looked the same even without the tie. There is only one consistent piece of clothing between the SMO and MP2 Cowboy outfits (the yellow neckerchief) and nothing at all between the Pirate and Space suits. Everything's different about Peach's explorer outfit, as well. Here's an image comparing them all: 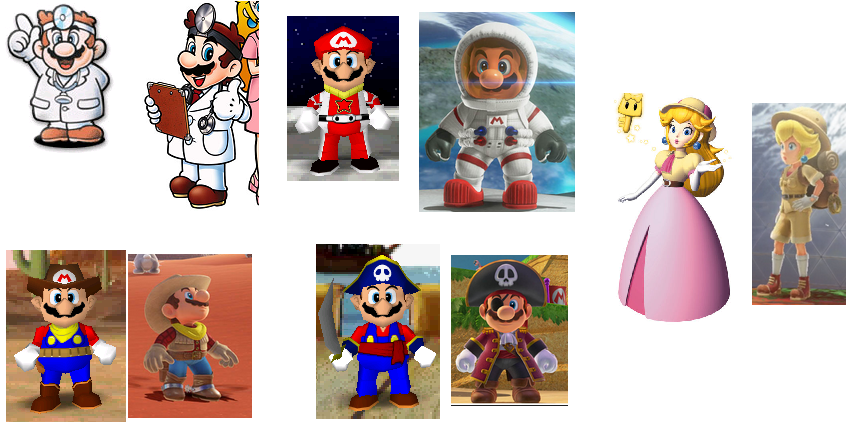 Are you seriously going to sit there and say that the differences between the original Dr. Mario's outfit and his 64 outfit are equal to the differences between the Odyssey and MP2 ones? You're being incredibly disingenuous about this whole thing. The Dr. Mario outfit remains the same aside from a few minor changes/additions. The MP2 outfits change completely aside from a few minor retained elements (most of which are just as likely to be coincidental; they're generic Cowboy/Pirate/Space/Explorer costumes). - Burb

The Space Suit is not really comparable to the one from Mario Party 2, but more closer to the one from Super Mario Land 2 with some changes. The point is that there just similar and the first game that Mario's wears an outfit based on those is similar since Mario Party 2 (Mario Picross more so on his Explores outfit). I am a disingenuous? Wow I didn't know I really was one, Considering I have been playing Mario games for ages and an expert at the series. Even you are just the one person who disagrees with my changes, it's that you are a hypocrite and nitpicking over design changes and references even if it resembles in some form. It still counts that Dr. Mario still changed a little as well whether it's major or not. Gamermakerguy 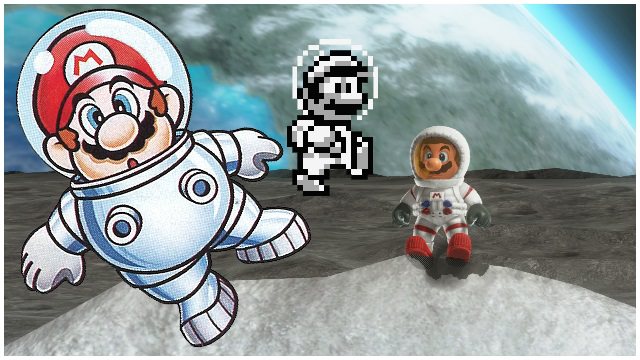 If you guys are going to start hurling insults, I'm going to start hurling warnings. Drop this, there's no comparisons to be drawn here other than "They are <insert suit here>." Even if they are the same type of suit, they are not the exact same suit. The Pirate, Space, Cowboy, Invisibility, Peach's explorer suits all look completely different from their other original appearance, so at the moment, it's hard to tell whether there's a reference there or not.

Do you know Foxune (talk)? You share the same IP address. Having more than one account is not allowed, but let us know if this is a family member or something.