Warning: Messages that posted here will also be answered here.

Hello and welcome to the wiki, i see you have been contributing on the wiki, good job. But i would like you to avoid adding third person view verbs as such you or your. Instead add in the player, players, etc. Also don't such opinions like that.

Hello, and thanks for welcoming me. That can be because I'm a Dutchman. I can still good English, but I don't know all words. Maybe you and other editors caN improve my contributions. Bowser Bowser Jr Boo 11:33, 11 March 2012 (EDT)

Just a heads-up -- the M.S.O.G. images that you uploaded a few hours ago were in the lower quality; the higher quality versions already on this wiki are the ones we try to use for th articles themselves (hence why the revisions you uploaded got reverted to the ones deemed having the best quality). All right; take care. --M. C. - "Mario Gals" Fan! User Page | Talk Page 12:17, 25 March 2012 (EDT)

But it is even prettier with high quality. So I would leave it.

Yeah sure. Also what do you mean by what did you want to talk about?--

Right! Let me see your userbox. Let's talk about Mario and Sonic and other things we like. Do you know the singer Phil Collins? He makes beautiful songs. Such as Can't stop loving you, You'll be in my heart, Sussudio, Look through my eyes and Come with me. Bowser Bowser Jr Boo 03:23, 26 March 2012 (EDT)

Also are you Sonic and Boofan?--

@New Super Yoshi,
Really? But Sonic & Boofan was really a nice guy. He really wants you all to forgive him.
@Yoshidude99,
Did I also may join your Sonic fanclub? And do you want to show that userbox? Bowser Bowser Jr Boo 13:52, 26 March 2012 (EDT)

You already are in it since you are Sonic and Boofan. I know because of Fantendo. --

Send me a message on Fantendo please.

Haven't you already uploaded all the Olympic Winter Games icons?--

Hello :) Good job on your recent uploads, but when uploading images, it helps to keep in mind to correctly use the {{Aboutfile}} template correctly. When you are in the process ofuploading an image, the coding for Aboutfile automatically appears in the summary box. I've noticed that you just upload without correctly formatting about file. I'll teach you :) What you were doing is this. The coding appears below...

Just replace the necessary parts of the code with that corresponding infomation, so it would look like this instead. Usually, you only need to fill in the [Subject of the image] and [Where you found the image]. Please consider the above infomation when uploading images/files. If you have any questions about anything, just message me here or on my talk page. Thank you for reading, and keep contributing :)

That is not a waste of time, you should always put it in instead of someone doing that for you S&B.

Please pay attention to my advice, because it is an inconveinience to remove the useless template. Me and M&SG had to go through all your uploads to fix them up. I ask you to either use the template properly, or just remove the syntax before you upload a file. Thankyou :)

He can be funny sometimes. I like Avriel more. Who is your favourite Smuf? Mine is Clumsy. ALos have you seen the movie? I have and I love it.--

Yes. I like Azrael too. Do you like Gargamel's apprentice Scruple? A boy with a gray shirt and pants, orange hair, and a blue hat and shoes. I like him. I like Clumsy too, he's cute. Do you like Brainy? I like him. Do you like Wild Smurf? A Smurf who lives in the jungle, who wears a hat of leaves and brown pants. Yes, I've seen te movie and liked it too. It's a funny movie. I wish I was Papa Smurf, because I have been in New York City. I wich city do you live? I live in Zwolle, Netherlands. The Netherlands, also known als Holland, is a little country in western Europe. It is close to Belgium, the UK and Germany. Bowser Bowser Jr Boo 13:45, 16 April 2012 (EDT)

I live in the UK. Also I don't know Gargamel's apprentice but I think Wild is ok.--

Short for sonic and boofan.

I don't live in a city. Also I think I do know Gargamel's apprentice actually. I think I saw him in a Smurfs christmas DVD.--

Do you live in a village? In wich village do you live? Do you mean The Smurfs: A Christmas Carol? Scruple don't appears in that movie. He only appears in the newer episodes of the cartoon show. Here's a picture of him: 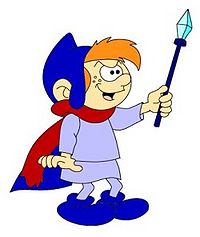 Yeah he's on a Smurfs christmas DVD I have where he steals a sack of toys.--

That's right! He appears in the episode Season 7-episode "The magic sack of Mr. Nicholas". Is this the title of the episode? Gargamel wants in that episode to give the toys back to Chlorydris, the evil witch who steals the toys. I've seen that episode in the Dutch version. Bowser Bowser Jr Boo 13:36, 18 April 2012 (EDT)

Which episode is your favourite? Mine is the one where Handy saves Clumsy and Clumsy keeps trying to help him in return.--

My favorite episodes are Vanity's Wild Adventure (in this episode Vanity en Wild discover how different they are when they spend a night together) and Bigmouth's Room-Mate (in this episode Scruple lives with Bigmouth after he's ejected by Gargamel, after is castle is collapsed). You mean the episode One Good Smurf Deserves Another? I like that episode too! Bowser Bowser Jr Boo 10:30, 19 April 2012 (EDT)

I don't pay attention to the names of the episodes--

Ok. Do you have Sonic Generations?--

Silver is a boss in the game. He throws cars at you and chases you with a meteor.--

I saw in you're userpage that you like Yoshis. So, want to join my group?

Hello. I noticed that you were re-uploading your images that were recently deleted by Coincollector. While there was a legitimate reason that those files were deleted, re-uploading them without a discussion is strongly discouraged. Kindly adhere to the final decision of the staff and please stop re-uploading them. Thank you.

I will leave the situation in the hands of the staff. But just for some cautionary advice, you should always adhere the admin's decisions.