Whoa, another long drought without yours truly. Don't worry, I'm still alive, and I promise to be more active.

It's All About Me

So, you want to know more about l'il ol' me? That's perfectly understandable, as I'm quite an interesting person. ^_~

Name: MelissaMarioSister, but you can call me Melissa or MMSis if you like!
Age: I'm 24 years old. I'm a fossil!
Zodiac: Sun sign is Gemini, Moon sign is Cancer. (Bet you didn't know there are Moon signs, did you? If you want to figure out your Moon sign, click here.)
Occupation: Amateur cartoonist.
Favorite Color: Purple
Favorite Food: Pasta, shellfish, cheese, and sushi (especially eel)
Favorite Drink: Either orange juice or chocolate milk... mmm!
Things I Like to Do: Surf the internet, play video games, read fiction and fanfiction, write fanfiction, draw fanart, watch and criticize cartoons, sometimes read comic books (my favorite comic book series is "Uncle $crooge." Don Rosa's stories are the best!).
Dream Job: Work in the animation business as an artist, writer, director, or voice actor. Or maybe a combination of any of those.

I also have Asperger's Syndrome, a.k.a. high-functioning autism. I have above-average intelligence, but my social skills are lacking. I was only diagnosed when I was 20 years old, so life's been a bit rough. I try to keep as much of a positive outlook as possible, even if I do worry a lot. Things can only get better from here. :)

My History as a Mario Fan

When I was just a tyke, I got into Mario by watching the Super Mario Bros. Super Show. Mario and Luigi became my very first imaginary friends. I actually owned an NES system - well, it belonged to my mother, really - and I had three games: The Legend of Zelda, Final Fantasy, and Duck Hunt/Super Mario Bros. I never really got far in Zelda because I had no idea what the heck I was doing. XD I was only five when I started playing it, anyway. I never played Final Fantasy at the time, either. I loved playing Duck Hunt, though, and I often wished, like everyone else, that I could shoot the damn dog.

But Super Mario Bros.... oh, boy. I sucked tremendously at it. I never could get past the first Goomba, and when I did, I got killed by the next one. I always cried when that happened, and eventually, my constant failures had a strange effect on me.

I was scared of video games.

But all that changed one summer, after I just turned 12 and was about to enter 6th grade. I was bored to tears one afternoon, and saw the old NES sitting in front of me. Mom and I still had the three games I mentioned earlier, plus we had added Super Mario Bros. 3 to the collection by that time. I had seen my best friend play it, and even convinced my Mom to play it as I watched.

You're probably thinking I picked up the controller and played SMB3. Nope, at least not yet. I remembered how bad I was at the original SMB, and how upset it used to make me. I thought to myself, "Melissa, you haven't tried to play that game since you were five. It's time to try again." So I did...

... and I didn't make it past the first Goomba.

But I knew I had to try again. So I did. The same thing happened again. I kept trying, over and over and over. Before I knew it, I was doing fairly well, and I was actually enjoying myself! I became addicted. I played the game constantly. Then, when I was ready, I played SMB3, and I fell in love with it. I especially loved the Super Leaf - flying with Raccoon power was totally awesome. My stepdad had a SNES, so I borrowed my stepbrothers' copy of Super Mario All-Stars. I went nuts with that one!

Finally, I took the biggest step of all - I asked my mom for a Nintendo 64 for Christmas. I screamed with joy when I got both the system and the game Super Mario 64. Seeing Mario in 3D for the first time was the most beautiful thing I had ever seen. I was officially a Mario fanatic.

I needed a lot of help with the games, so I took another huge step: I started using the internet for the first time, searching for game tips and glitches. I also started printing out all sorts of pictures of Mario and taping them inside a special notebook (my stepfather got mad at me a lot for making the printer run out of ink! XD). It didn't take long for me to become an internet addict. Now, by this time, I had realized that the Mario series didn't have a lot of female characters. One day, I was playing the All-Stars version of SMB3, and I noticed something while Mario was in Invincible mode - one of his color changes had a pink cap and overalls. I thought about what would happen if Peach dressed up in overalls and a cap. Then I thought more about how much I liked SMB3's Raccoon power. Soon my ideas began to thicken, until I thought to myself, "Hey! What if I was a Mario character?" So I drew pictures of myself dressed in Mario-type clothes, with permanent Raccoon ears and a tail. Thus my first Mario fan character and new internet persona was born: Melissa, the Mario Sister! (Why "Melissa," you ask? Because "Melissa" is my real name, and "Maria" is too predictable. :P)

The first Mario site I became addicted to was Super Mario Bros. Headquarters. I became involved in the forums there, where I met a girl role-playing as Princess Peach. I had it in my mind even then that Melissa would actually be Peach's sister, and was only an honorary Mario Sister. So I RP'd a bit with "Peach," and she was taken with the idea of me being her "sister." Then, for some reason I don't remember, we were forced to move to another forum. Peach had created a forum for a website she and other people were building for Mario Party. We all RP'd a lot there, and it was there I developed Melissa's character a lot more. At one point I made my own forum called "WAMFLU," which was short for "We Are Mario Fans! Listen Up!" Basically it was a forum to post game ideas and hopefully get Nintendo to listen to us. Naturally, it was a total failure, but I still remember WAMFLU with fondness.

Unfortunately, my fun RP'ing with everybody ended with some drama-fest, and I was forced to move on elsewhere. I tried to figure out how to build my own Mario website, and basically I was a bit of a n00b, so I was randomly asking people to help me with the site with the expectation that they'd say yes. *facepalms and sighs* That was a very embarrassing time for me. But hey, I was only 13! The site, of course, never happened, and to this day I'm still trying to figure out a proper premise for a Mario website and how to present it appealingly.

My Mario fanaticism only increased during my first year of junior high. It was around the time Yoshi's Story was released. A friend of mine told me about a Mario game she owned: Yoshi's Island. She knew I liked Mario games, so she lent it to me. OH MY GOD. I was blown away by the graphics and gameplay, and I played it non-stop. It took a LONG time for me to return the game to my friend, and Mom had to buy me my own copy. It was official: my Mario fan status had been raised to "die-hard."

A year or so later, during November, I decided to come up with a new fan character. I knew Melissa needed an evil doppelganger, just like Mario had Wario. It might have been around that time when Mario Tennis was released, or was about to be, but in any case I was eagerly anticipating seeing Waluigi on my TV screen, which gave me all the more incentive to give Melissa an evil counterpart. Problem was, I didn't know what to name her! "Walissa" sounded too weird to me. I tried thinking about different "W" names, with no success. Finally, I asked Mom if she could name any "W" names. One of the first names she came up with was "Wanda." Bingo! It began with a "Wa-," so it was perfect! (I didn't find out until much later that there was already a Wanda in the Mario series, but I didn't really care.) Thus, Wanda the Wario Sister was born. When Mario Tennis came out, I was so thrilled to see Daisy in the game (I didn't own Super Mario Land yet, but I knew about the game and how long it had been since Daisy appeared) that I decided to make Wanda her biological sister.

Fast-forward to the present: I own many Mario games now, and I own a Wii with Super Mario Galaxy (which I love to Star Bits. Get it? Bits, Star Bits...? Meh, nevermind). Melissa and Wanda have changed a lot since their creations, and I am proud to call them my personal trademarks. Nintendo will always be my favorite video game company, and I will always be a Mario fan until the day I die, no matter what other series or systems I may play.

I'm glad you managed to read through all this! Thanks, and I hope we can become good friends! ^_^

Check it out! It's what my alter-ego looks like! Sadly, all of the sprites save one are only SMW-styled at the moment... but that's only because I find M&L-styled sprites ridiculously hard to make! @_@ 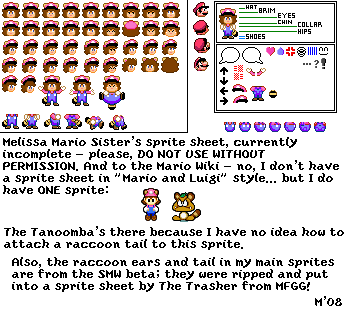 My Accomplishments on the Wiki Thus Far

I may present these as proposals in the near future...

"Daisy also appeared in the Dragon Quest crossover game, Itadaki Street DS, which was a Japan only release. Daisy was a playable character, and her non-playable role had something to do with the Mario Stadium from Mario Superstar Baseball."

The video that was once here was removed by the user. ;_; So, I replaced it with a Caramelldansen video instead! It's Mario and Luigi versus Wario and Waluigi!
Retrieved from "https://www.mariowiki.com/index.php?title=User:MelissaMarioSister&oldid=2874791"
Meta category: