Hi, I'm Clyde1998, this is my first Good Game, Bad Game. I play a good game, that just gets rubbish! I think I should start my section in the Yoshi series. I found two 'similar' games in the same series and found the good one and the rubbish one. This is a very quick one! Any Other Series you can think off put it on my talk page!

What a game, Where should I start?: 6 babies and 11 Yoshi's. It beats The First Island Game for many good reasons,

It wouldn't work though if it wasn't for 'the first one'. You start in a similar level to the first game's one, you follow everything until you fight Baby Bowser, after you beat him all the babies and Yoshi's defeat Grown-Up Bowser and he goes back to his time!

I would recommend this game, even if you don't have a DS. I would buy a DS just for this game, and other Yoshi Games!

What a bad game. It doesn't tell you what to do, however I did play it on the Internet! I don't really know why any would want to play the game, I though that Mario & Yoshi was bad!

No-one would know what to do, I pressed every button, but nothing happened!

I deferentially would NOT recommend to anyone!

Fake News - Deaths and Arrests I

Sadly, Goompapa was involved in a car crash and was killed. Every Goomba was at the funeral, including many Goomerang Bros, they were on holiday in Isle Delfino. The car was owned by Krash and he hasn't been seen since, he was having a break off his job. He crashed into Goompapa on Mushroom Bridge (picture 1), he did get court on speed cameras, the Mushroom Police arrested him later. Krash has been seen attacking Donkey Kong and Diddy Kong (picture 2), in the past.

This time, I thought i'd go into the Mario Golf series. I had a lack of time this time. If there is any idea's put on my talk page!

Weather for all weeks, yep it's stays the same on the Monday as it does the next week even if Sunday has Sandstorms! WEATHER FOR THE DOLPHIN!

It looks Sunny this week, maybe a storm will break out

Global Cooling is down!

The Weather is done for the mouth. If it's wrong well, so what?!

I'm going to do the Mario Series this month, and next, and next again! I'm comparing Hotel Mario with Super Mario Galaxy

You guessed it, it's Hotel Mario! Only Kinding, it's Galaxy. Galaxy had the same plot as every Mario game, Peach gets kidnapped, by Bowser, and Mario (and Luigi) saves her, but they but a twist on it. A comet passes over the Mushroom Kingdom and rains down magical stars and stardust, so they celebrate.Peach invites Mario to the castle, like Mario 64, Bowser then came, with Bowser Jr. had stole The Castle. Mario finds Peach, with 121 stars. Now you can play as Luigi.

Hotel Mario, not on a Nintendo console game, it's for the Phillips CDi. Bowser and the Koopalings have taken over the Mushroom Kingdom(like in every Super Mario Bros. 3 & Super Mario World), where they've built seven Koopa Hotels and have kidnapped the Princess, hiding her in one of them. After Mario and Luigi are informed of this, they set out to rescue her.

The Cut scenes are cartoons, on the boxart, Mario has 5-fingers, but in the game he has 4!

Philips Media had acquired the rights to produce Mario and The Legend of Zelda games after initial plans to make a CD-ROM add-on for the Super Nintendo, and that fell through. The CD-i was a poor console anyway. The quotes were rubbish too...

"Nice of the princess to invite us over for a picnic, 'eh Luigi?" - Mario being played as Mark Graue in Hotel. "EEK! A Ghost!" - Luigi in Galaxy.

So, All in all... Galaxy is a much better game than Hotel Mario.

These are in the PEGI, ESRB order

Waluigi got injured. He had been driving around, with Wario, in the Wario Car. They turned sharply and Waluigi fell of the back of the Car. The police came, and Wario had the Waluigi's iD, which is illegal. The police arested Wario, and Waluigi for being on the back of the car. The only time that's aloud is when there's a Double-Kart Tournament coming up. Mario was also arrested, he was speeding on the motorway, at over 100mph. Luigi got him out on bale. Birdo hit a police car at over 110mph. She was taken to jail for 6 years. She'll need to pay 3,000 coins to fix the car, or to get a new one. 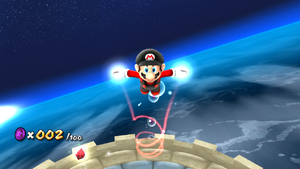 Hi I'm Clyde1998, this is my first Screenshot(s) of the Month article. I'll show you some very good screenshots. My Information is short, because most of the pictures are self-explanatory. all Week, but anyway: 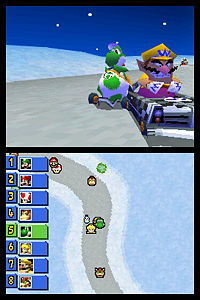 Yoshi and Wario in MKDS

Mario Kart is a very good series, but some games are not good. So we look at the Hand-held, Mario Kart games.

MKSC wasn't a good game, and only had eight characters - not much now. They had crazy things like horns (select button). There was 40 courses in the game - 20 from Super Mario Kart - not what you need. Nintendo can make better games, but it was back then. It's not as bad as Virtual Boy games - red and black *I'm BLIND!*.

Now I hand over to my co-writer... 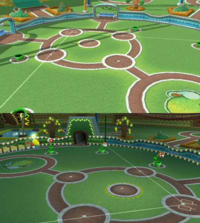