The 'Shroom:Issue 141/It All Started With Melee

From the Super Mario Wiki, the Mario encyclopedia
< The 'Shroom:Issue 141
Jump to navigationJump to search

It All Started With Melee 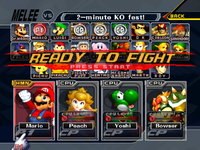 At first, I knew maybe 25% of these characters.

I have a lot of games nowadays, easily numbering somewhere in the hundreds. But before I believe 2002, I only had a handful of games. We had Humungous Entertainment titles, The Sims, and Chip's Challenge. As far as Nintendo games were concerned, we had Super Mario 64, Mario Kart 64, Metroid II: Return of Samus, and Kirby's Dream Land. And then we got a Nintendo GameCube, and it blew my young mind that there was another gaming system beyond the Nintendo 64. Alongside Super Mario Sunshine and Luigi's Mansion, there was one other game that opened my eyes to more franchises: Super Smash Bros. Melee. I don't remember how we got this game, perhaps my parents got it because of Mario and Bowser on the cover, or one of our friends gave it to us. I certainly don't remember asking for it, because I had no idea so many franchises could fit in that tiny disc. But we got it, I played it… And I had no idea who most of the roster was. I knew Mario, Bowser, Princess Peach, Yoshi, Donkey Kong, Kirby, Samus Aran (though as Metroid, like most people). Maybe Link? But that was about it. So many new characters, and I can still recall most of my first impressions on them.

Of course I knew about Mario. Super Mario 64 was the first game I played, and I played it almost every day for a few years. There's no doubt I'm going to know everything about Mari—wait, fireballs? A cape? Spinning?? Mid-air jumping??? Yep, turns out there were more games out there than those for the Nintendo 64, as the ones I've played had none of this. We didn't get any of the earlier titles until after we played Melee, though I think we had Super Mario Land before I played Melee? My memory's a little fuzzy on that one. But if I did, Mario's fireballs are certainly different from the Super Ball.

Yeah, this left a good impression on parents.

So… Pokémon. Those of you that played the series when it first came out may recall the controversy between it and religious beliefs, namely Christianity. Growing up as a young Christian, I wasn't exactly aware of the controversy. Simply put, I just liked to play games. My parents were aware, however, so I didn't get to grow up playing with these little pocket monsters, nor did I hear anything about them. So Super Smash Bros. Melee was the one to introduce me to the "World of Pokémon", and Pikachu was there at the forefront of it. I wouldn't exactly call this a great start, Melee and Pokémon are both about pitting two or more characters against each other, and it may not have left a good impression when you have a sword-wielding green-capped hero squaring off against a cute little yellow electric mouse. Yeah… Needless to say, Pokémon didn't exactly enter my home for a while. And then we heard of the Pokémon anime, and it was airing when Ash Ketchum was in the Hoenn Region. My brothers and I knew we weren't supposed to watch this, so we did it in secret when parents weren't home or by using the television upstairs. What we saw was creature against creature, a young boy on a journey, and friends being made. Eventually, our parents caught on, but by then, the "War on Pokémon" ended, so we were able to start catching them all on our own. 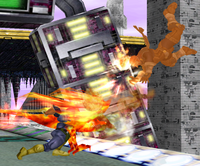 This guy looks cool, he must be a great fighter in his game!

"FALCON PUNCH! FALCON KICK! FALCON PUNCH!" Who was this guy? We had no idea, but he sounded awesome! The guy can ignite his hands and feet, so he must have super-powers! …Wait, he's a racer? A racer with super-powers?! YES!

NOPE! Turns out all of his moves were made specifically for Smash. I don't remember my first impressions with Captain Falcon too well. His trophy tells us he's a racer, but says nothing about his moves being unique to Smash. The event in the Adventure mode also left an odd impression, do people really run aside cars in F-Zero? It wasn't until I actually played an F-Zero game that I knew what Captain Falcon was: a bounty hunter/racer. These Falcon Punches and Falcon Kicks and "Show me your moves"? Nowhere to be found.

And then we unlocked Ganondorf and we were even more confused… 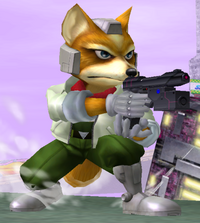 Fox McCloud has this sort of "space-cop" feel to him.

Behold, our foray into anthropomorphic characters! A fox with a gun and combat boots? Wait, he goes into space?! I caught on to Fox McCloud and the Star Fox team pretty quickly. And when we unlocked Falco, it became apparent there was a whole galaxy of characters like these! Foxes, birds, frogs, wolves, and more, fighting together or against each other for control over the galaxy. When we finally got to play a Star Fox game, being Star Fox 64, we found we controlled their ships rather than the characters themselves. Still cool. 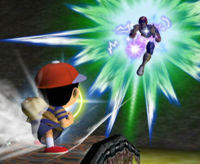 "Oh, that's Nester!" my dad says as Ness pops up in the Melee opening. He says he doesn't remember saying that, but that line has stuck with me for some reason. It seems he had confused Ness with the mascot of Nintendo Power. When we got to the character select screen, he was simply called "Ness". Believing what my father said, I thought they shortened Ness's name to fit in the box, similar to "D K" and "C. Falcon". I had not heard of Nintendo Power or EarthBound at this point, so I had no point of reference to tell me otherwise.

And then I actually found Nintendo Power and played EarthBound and found the two are nothing alike. It appears the confusion comes from the similar names. Oh well, because of this, I'll always think Ness is short for Nester. 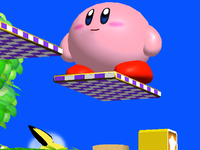 And then a Giant Kirby fell from the heavens, and all who witnessed it were confused.

Kirby's one of the few characters I already knew about before playing Melee. But he's different here than in Dream Land. And pink! His signature move, Inhale, allows him to eat other fighters and gain their abilities! Something he can't do in his debut game. And he has a hammer, flame dash, sword, and can turn into a Thwomp? Kirby plays vastly different from the game we had! But he can't fly for some reason. 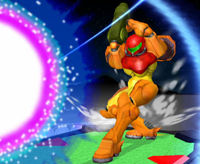 Like Kirby, I knew about Metroid when I saw him in Melee. But something's odd here… He's called "Samus". The only Metroid game I played before this was Metroid II: The Return of Samus, and the title sounded so ominous to me that I thought this "Samus" was the bad guy. But turns out, he's the main character! And a girl! Whoops! At least I soon found out I wasn't the only person to make this mistake, heh.

I wasn't allowed to play a Zelda game at first. The only Zelda games we had were The Legend of Zelda and The Legend of Zelda: The Wind Waker, but we got those after we got Melee I think. I watched my dad play Wind Waker, but I wasn't allowed to play it because he and mom said the game was "too violent". Strange, as I can play Melee. But because I played Melee before a Zelda game, I wasn't one of those that confused Link with Zelda. Though I did believe Zelda was not in Wind Waker until she actually showed up.

And then we found out Zelda could turn into a different character named Sheik who is practically a ninja *loud gasps*. Too bad that wasn't in Wind Waker. 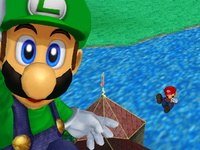 This can't possibly be Luigi.

My first impressions on Luigi are strange. I knew about him already, as he was in Mario Kart 64. But for some reason, I didn't believe it was him in Melee. Mario jumps up the side of the castle and Luigi bops him on the head, and my first thought was "Nah, that's just Mario in a different costume." …?

If I could slap my younger self, I would.

Imagine this: You've never played a Zelda or F-Zero game before. You unlock a character in Melee named Ganondorf, who is represented by the Triforce from Zelda but shares moves with Captain Falcon. I didn't know what to think of this guy. My dad said he knew about Ganon, but not Ganondorf. So I drew the only logical conclusion: Ganondorf is in both series. He's Ganon in Zelda, but Ganondorf in F-Zero. Not even the trophy description that says he's from the Zelda series and he fights against Link and Zelda for control of the Triforce can convince me!

And then he was called "Ganondorf" in The Wind Waker and I was just like "oh". 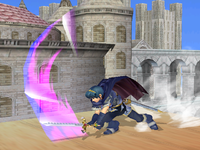 Female sword fighters are pretty cool. Especially when they are actually female.

When we got Marth, we were a little confused. His movements, hair style, and tiara read to us as "girl" for some reason. So we kept calling Marth a girl until we finally unlocked his trophy that called him the "Prince of Altea." And the dude became even cooler to us! A fancy, quick, sword-fighting regal who quickly became one of our best characters. And then we unlocked Roy, a similar character but with red hair and a blazing blade. Like most other Melee players, we wanted to know where these two characters came from, and Fire Emblem quickly became one of our favorite franchises. Just too bad we don't have any of Marth or Roy's games!

And that's about it for my first impressions. Some characters I knew, others I caught on pretty quickly to who they are, and the rest I was just stupid on. Melee introduced us to many franchises for the first time: Zelda, F-Zero, Star Fox, Pokémon, EarthBound, Ice Climber, and Fire Emblem. And then we discovered Super Smash Bros. Brawl, and then Super Smash Bros. for Nintendo 3DS / Wii U, and finally Super Smash Bros. Ultimate! More franchises, more characters, and more fun!

But it all started with Melee.