Hey, welcome to a new year of Fun Stuff! I'd like to welcome our three new staff members Lakituthequick (talk), LudwigVon (talk), and The Pyro Guy (talk) onto the team! I'm glad to have them on board and I hope they do well in their respective positions. I'd also like to point out that all three of them have written for Fun Stuff in the past; truly this is a sign that Fun Stuff is the best team, seeing as three of our alumni have risen up the ranks and why you all should aggressively apply for every single section!!!!!!! Come on, it's fun... stuff!

As a short followup to last issue's scavenger hunt, Superchao (talk) won first place and found all 12 Power Moons within roughly an hour; congratulations to him! He was followed by Freakworld (talk) in second place, and then by The Pyro Guy (talk) in third place; great job to everyone! I'd also like to thank the rest of you for your participation in the hunt, and especially thanks to Lakituthequick (talk) for his invaluable assistance in putting it together! I hope to do more large-scale events like this in the future, so stay tuned!

I don't have much else to say here other than the fact that Splatoon 2 has taken me over lately. 35 hours and 18 levels in 10 days is... an accomplishment? But yeah, custom splat jr and #comedybros for life tbh fam youre a kid squid woomy etc. Anyway, I hope you enjoy this month's Fun Stuff!

Quiz hit #1 again in December, followed very closely behind by Where in the Marioverse is Carmen Sandiego?. It's aMAZEing also scored a nice sum of votes. Congratulations to all winners and thank you to everyone for writing!

Shoey makes a comeback and reads off some neat Mario facts for the month.
[read more]
BBQ Turtle challenges you with some quite dashing anagrams!
[read more]
Camwood wishes you all a toothy New Year.
[read more]
It's getting pretty cloudy up in here...
[read more]
DK really needs to invest in a big safe for his banana hoard.
[read more]
Yoshi876 tests you on your New Super Mario Bros. knowledge!
[read more]

Hey look it’s me Shoey actually doing the section i was hired to write...anyways did you know?

Hello all! This month I've decided to make you a bunch of anagrams that are Mario Kart: Double Dash!! themed, partly on account that I got it for Christmas, and partly because... well, I felt like it! And again, so far as I know, next month's issue isn't anything-themed yet, so feel free so send me any suggestions for themes or funny anagrams you found on my talk page or through the forums, and I'll see what I can do!

Ho, dear, this past month has been... something. Without going too personal, I have seven cavities(!) in my teeth. Thankfully, by the time this issue goes live, the former should be fixed... but they'll have to put me under anasthetia (if I spelled it right) 'cuz I'm a wimp. BUT, on a more positive note, I've had a BLAST with Christmas! I got a Nintendo Switch, so I've been having a LOT of fun with Splatoon 2 (Salmon Run eternally best mode, and Comedy is eternally best film genre), and I finally achieved a life dream of mine and became 132nd Skywatcher--meaning I got the good ending to what is arguably one of the hardest puzzle games of all time.

In addition, last month I said that there was one puzzle--the last one--that i was keeping its source a secret to see if anybody would know where it came from, and said on the Mario Boards that if anyone could answer, they'd get a shout-out. However, nobody correctly guessed... or really, guessed at all. The answer was that it's a roach from DROD: Architect's Edition, or version 1.6. DROD, by the way, is the best puzzle game I've played and arguably one of the hardest puzzle games of all time. So, tl;dr, nobody guessed its origin so no shoutouts.

But that's not Picross. This, is Picross. We have 2 new puzzles. Sadly, I don't have much for this one--most of my time has been absorbed by real life. That doesn't mean I don't have 2 puzzles, though! Our first puzzle is simply something to realize our new year, and the other... I wanted to do something regarding the fact I had 7 cavities with a teeth-related puzzle (after all, 7 is my favorite number so of course I would use 7 as an excuse to make it personal), but there's a surprising LACK of Mario-related teeth things (you'd think that there'd be a Mario toothbrush, but I couldn't find one, and that wouldn't be very good for a picross puzzle that's black/white anyhow.) So, I decided I'd pick the playable character of a microgame from the Gamer mode of Game & Wario; no, he doesn't have a name, but I'll just give him a conjectural name for now.

Don't know how to play? No issue; just read these rules from the last few issues. If you want to know how to play, simply take any program you can edit images with (MS paint is... more than an option), or even print it out if you're so inclined, and you can shade in the symbols. As for the rules...

Without further ado, here come the puzzles in two! ...C'mon, I found it clever!

This month we have a decoration depicting Lakitu's Cloud from the walls of Dragon Driftway in Mario Kart 8 and Dragon Palace in Deluxe!
This was a request from Koops, which he sent when Meta Knight (talk) was still in charge of It's aMAZEing. 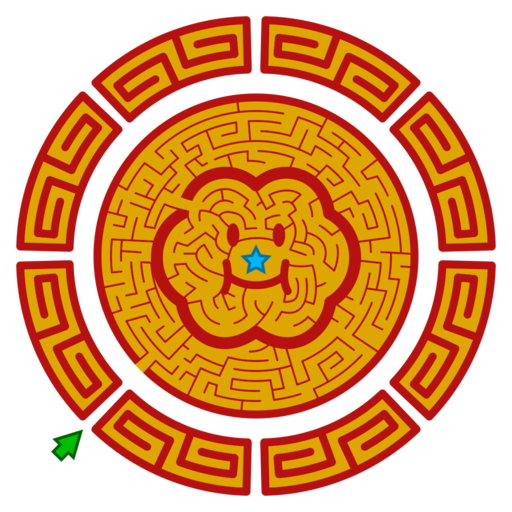 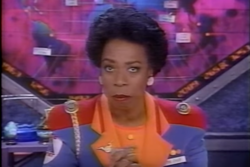 "You've got another case to solve, cadet! Carmen has pulled a Kremling trick and swiped Donkey Kong's entire banana hoard! The big ape is on the verge of going ape, so make like a banana and split! We've narrowed down our list of suspects to Carmen's favorite tuxedo pal, Starchie Archie, and it's up to you to track him down and bring those bananas back!" 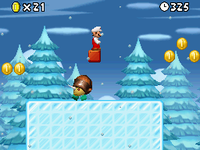 Let me be (probably not) the first to welcome you into this new year. And as it's a new year, what better time than to quiz you on the New Super Mario Bros. series. Let's get started!