Hi, everybody! Welcome to the new year of The 'Shroom!

I hope your January is going well. I'm busy spending my free time playing Xenoblade Chronicles 2 and vibrating excitedly in anticipation for the release of Tropical Freeze for Switch with FUNKY KONG. I did not see that coming but Nintendo knows what I truly need.

We have a handful of sections for your reading pleasure this month! Consider signing up for a section, make it your New Year's resolution to be a part of the team for a year and see what you think! ~FunkyK38

Hooded Pitohui (talk) takes the win this time, with a memorial Mario's Boombox section for the Wii U. Ah, good times. Thank you to everyone who voted, and please keep it up!

Just a happy Princess and her mushroom.

Honestly, the first thing I noticed is just how damn happy that mushroom is. I mean look at him! He looks just absolutely chuffed to be there with his bright beaming smile. Also, it might just be me, but it looks like that mushroom is totally rocking a 5-o'clock shadow for some reason, which brings up an important question; can mushrooms grow facial hair? This image also raises another important concern; just how sentient are the power-ups in the Marioverse? I mean, look at that mushroom, he’s smiling and is clearly aware of his surroundings. So I guess what I'm asking is, is Mario eating sentient life forms to gain their powers?

I really like the way Princess Peach looks in this image. She looks very regal, all dressed up in her traditional outfit. I also love just how happy the Princess is with her little mushroom friend. I mean, look at her standing there without a care in the world. I like the simplistic way that Princess Peach is drawn. I think it really fits the cartoony vibe Mario games had at the time. One thing I don't really like is how the crown looks, cause it looks overly simple to me, and I think the depiction of her brooch is pretty poor. I also wonder what exactly the white stuff on Peach's cheeks are, I mean is it eyeshadow or some sort of other makeup? Who knows. All in all though, I like this image. I think it's a cute charming portrayal of Peach and perfect for the time it was made. 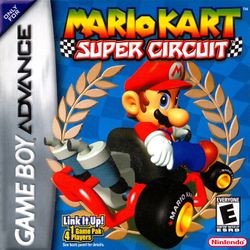 Last month, I featured a boxart that was extremely beautiful, and even though it had its flaws, there was a lot to discuss about it. This month, I've done the complete opposite, and gone with a boxart where there is barely anything to talk about. I bring you the boxart of Mario Kart: Super Circuit.

And yes, there really is nothing to talk about here. It features Mario in a Kart, and that is literally it. And Mario's stare is slightly unnerving. The only other thing of note for it is the fact that it advertises the link cable compatibility. But worry not readers, I'm not finishing the section here. Instead, I'm going to go on about some of the things that it could have featured.

First and foremost, more characters would have been nice. The preceding Mario Karts have all featured more than one character, this one should do exactly the same. Secondly, feature some tracks. Mario Kart: Super Circuit had a wide assortment of track variety, it would have been great to see them racing on some them, like Sunset Wilds or *shudders* Shy Guy Beach. And finally, the link cable compatibility gets a nod, so why not the fact that this game has more tracks than any other Mario Kart for the time when it was released. That is a massive selling point, and it is unbelievable that they missed this opportunity.