Sorry, I was in a hurry when I wrote that... I mean the ones in the MK games, the ones that use poles to puul out the drivers. They seem to be Fishing Lakitu's, (particularly the one in SMK) but I want to make sure. - Ultimatetoad

Are Lakitu allies? Most of the time they are neutral, some times they are enemies, and once they were allies. Does Lakitu fit under Allies because in SM64(DS), Lakitu is the one who warns Mario (Yoshi) about Bowser.Knife (talk) 23:24, 20 March 2007 (EDT)

I guess.. Is the category there?

I'd put the Allies one in, and leave the rest as is.

The Super Paper Mario Catch Card clearly says "it" and not "he". Yet, in Paper Mario, Lakilester was male and Lakilulu was female. Do Lakitus generally have a set gender? - Cobold (talk · contribs) 09:36, 30 March 2008 (EDT)

I'm not sure if you're refering to a specific part of the article, but here's the deal. When talking about an animal, say, in the wild, some people prefer to use it. It's more professional, apparently, and it doesn't matter if you know the gender of the specific critter in question. You could have a report on a female black widow spider and both he and it would be acceptable. If you have something like a specific dog, though, people sometimes prefer to use use he or she because of endearment. So, we have evidence of there being male and female Lakitus, but Nintendo of America's translation team talks about 'em generally, so they use "it". I don't think there's anything more to it than that. Stumpers! 19:45, 6 April 2008 (EDT)

That's a good attitude to take. All too often on this Wiki we act like Nintendo is a god or something. I don't think a mistake on a trophy/card changes anything (ie we shouldn't assume that Daisy was in Mario Golf's storyline even though she wasn't in the game). Stumpers! 19:51, 12 April 2008 (EDT)

Most generic Lakitus seem to be male, but Lakilulu is obviously female... The have to have a gender, I guess female Koopas don't have to serve in the army, as there are no distinctly female enemies in most of the games. (Wendy O. aside.) (Yes, that's a generalization, and you are free to find exceptions.)

Japanese don't usually use gender-specific pronouns at all. If we don't know the gender of enemies, we call them "it". Technickal 20:32, 8 December 2011 (EST)

"Or have coffee. with cream" isn't the most amazing quote ever. Should we change it?

Hey The Quote is very good,but isn't correct.This Quote actually isn't said by Lakitu,its said by a Lakitu Bro..I think we should change it,but NOT to the old one,that one was really bad.The only thing is that i don't know another famous Lakitu quote.Anyone knows a better one?--Super Eekie 64 06:24, 11 May 2011 (EDT)

Like the character Yoshi is named after his species, is the Lakitu of the Mario Kart series a specific character named Lakitu? - IGGY7735 (talk)

Who made up the name for Lakitu? It is most likely someone in Nintendo of America. It seems pointless to turn Jugemu into Lakitu than say "Spiny Thrower" or "Cloud Koopa". Is there a meaning behind Lakitu? What language is it from or is it complete gibberish? So many mysteries.--Platform 09:37, 2 September 2011 (EDT)

On the page, it says Lakitu will appear in MK7. However, this Lakitu has a red shell; are we sure this is the same person?

I've heard this pronunciation pretty much everywhere, Lah-kih-tu, but I've heard this one frequently on Nintendo Week. La-kee-tu. Is there an official pronunciation or is it a "potato, pot-ah-to/tomato, tom-ah-to" kind of thing? KoopaKiller13 21:19, 10 December 2011 (EST)

People mispronounce video game characters' names all the time, and that's assuming there even is an "official" pronunciation. I don't really think there is an official pronunciation; it doesn't really matter how you say it. Yoshiwaker

Unless you can't even tell what they meant :P

Role in the Mario Kart series[edit]

Should we move that info to the Fishing Lakitu page and delete it from this one. Because Lakitu's role in the Mario Kart series is more of a Fishing Lakitu rather than a regular one, as the Lakitu always has a fishing rod.

The info on the ones that fish out crashed racers is already on the Fishin' Lakitu article, while that section is focused on all of the Lakitu (aside from the one that races in MK7), which aren't all Lakitu with fishing poles. This in mind, I don't think there's any info that needs to be moved from that section. Bop1996 (Talk)

Should the part in the intro paragraph about Shigeru Miyamoto stating Lakitu is the most like him go in Trivia? Or should it stay there? Giga12 (talk)

It works where it is, and trivia is generally frowned upon, if it can be integrated into the main article and still make sense then it should remain in the main article. Yoshi876 (talk)

In the Sugar Rush game in the Wreck-It Ralph movie, the race is conducted by flying marshmallows that bear a strong physical resemblance to Lakitu clouds; have the same role that Lakitu has in the Mario Kart games; and is clearly based off of Lakitu. Should this be mentioned in the article as a Lakitu cameo? FlashRenegade

Hey, hey, HEY! There is a Lakitu in Mario and Luigi: Dream Team, in fact, there a common enemy in Dreamy Driftwood Shore. If you don't believe me, then check out Lakitu R. There can't be a Lakitu R without a Lakitu. So will someone please put this in? If you want the stats, than here they are! Mario & Luigi: Dream Team bestiary 98.16.11.4 20:50, 20 January 2015 (EST)

Thanks. Dunno why I didn't remember any Lakitu in this game... adding to the article. 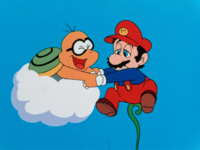 If he did that to mario, do that mean he is a good lakitu? (like the camera lakitu)

Pretty sure this one is feigning or just doing a sort of one-off cartoon gag.