Any proof these are actually Thwomps? They don't even look similar, they look more like Bristles than anything... Binarystep (talk) 07:02, 17 April 2015 (EDT)

According to the article's creator, they were paired together because of their similarities, such as being gray and stony. I think this one's a bit up in the air; arguments could be made that its appearance is close enough to Thwomp, but arguments could certainly be made for the opposite, which is aided by the fact that there's no official backing for Grrrol's being Thwomps. I'd be fine with getting rid of the mention, but other people should voice their opinion. Hello, I'm Time Turner.

We should just remove the mention, these don't have anything in common with Thwomps other than being animate stone creatures (by that logic, Bristles and Clefts are also Thwomps). Binarystep (talk) 21:31, 1 May 2015 (EDT)

Well, they're both animated, gray, stony obstacles with cartoony faces that are covered with spikes around its edge, but I see your point. Hello, I'm Time Turner.

Ok Binarystep first of all Grrrols design are more closely related to Thwomps the the gray color, outer darker edge, the spikes, the color of their eyes, and similar to Thwomps and Whomps they try to roll into you/crush you at the same time, anyways Clefts merely try to ram you, and Bristles...well they're all shield based and as it says in its article it attacks with Destruction no crushing in there. Grrrol are more logical to be in the Thwomp family, while Bristle and Clefts can't be part of the Thwomp because they don't relate to them at all. Also if Grrrols are not Thwomps then explain why Spiny Tromps and Spiky Tromps are Thwomps besides their name. 50px

They have an accurately similar appearance to Grrrols and they behave the exact same way as them, it's only logical that both Grrrols and Mega Grrrols are Thwomps. Also neither the SPM tattle logs nor the cards don't refer both of the Tromps as a sub-variants of Thwomps TheHelper1000 (talk)

It might seem logical to you, but Time Turner pointed out that "arguments could certainly be made for the opposite". Tromps have the possible excuse to be related to Thwomps mainly because of their names. Grrrols, however, resemble Tromps which in turn kind of resemble Thwomps, so I think they're distant cousins at best, i.e. the connections are loose and its foundation is mildly speculative, so not a strong case. There is also no official backing behind the relationships of these enemies, so placing Grrrols under the same tree as Thwomps would be speculation. I think saying that they're related, perhaps distant cousins, would be the most logical way to go here. Related due to similar behavior, but kind of in a convergent way.

With this logic, shouldn't we remove Whomps in the Thwomp category?

Responding to me or this discussion in general? Either way, good point. Also concerning your edit summary, "Where's the evidence that they aren't Thwomps.[sic]", evidence is usually used to prove the affirmative, not the negative.

KaBoom! 20:43, 12 September 2015 (EDT)
Responding to you. But Whomps clearly do make noises derived from Thwomps so they have a bit clearer connection. Man I'm getting a bit off topic, though.

Also, take account into the names; as I said earlier, Spiky Tromp has the name resemblance to "Thwomp". Grrrols don't have this distinction.

Why is it too speculative to say these things are related to Thwomps, but not too speculative to say that Grumblump, Walleye, or Wallop are? These seem more Thwomp like that they do. Geometric stone shape covered in spikes that attacks by crushing, only real difference is that this is a cylinder. And before anyone says they look more like Bristles again, no they don't, Bristles are clearly intended to be viewed as spherical, while these are cylindrical, and therefore are more like rounded versions of Thwomps' slabbish shape. Doc von Schmeltwick (talk) 05:18, 8 October 2017 (EDT)

Grumblumps at least look like Thwomps, though I'll admit there's no proof they're actually related. As for Walleyes and Wallops, I always thought it was weird that the wiki accepts them as Thwomp derivatives, but it's apparently too speculative to say they're directly related to each other, despite there being way more evidence of the latter. Niiue (talk) 07:58, 8 October 2017 (EDT)

....aaaaaaalso Grumblumps really look nothing like Thwomps. Pouncer looks like a Thwomp, but Grumblump looks more like a maybe-living version of one of those cubes in Super Mario Sunshine's "Secret" stages. Doc von Schmeltwick (talk) 00:02, 9 October 2017 (EDT)

I agree with Doc Von Schmeltwick on this one. Grrrols resemble Thwomps more than anything else, I'd even go as far as saying they resemble them more than Whomps. I would classify them as a Thwomp subspecies myself. I mean if Grumblumps are a thwomp subspecies why not Grrrols? --Seandwalsh (talk) 11:22, 3 February 2018 (EST) 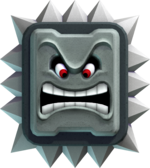 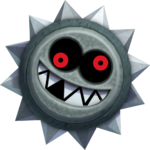 Quick comparison. Note how they both have light stone fronts with darker-colored rims, red eyes, and literally the exact same serrations to the spikes. They're pretty clearly intended to be related. Moreso than Wallop and Walleye are to Thwomps, I'd say. Doc von Schmeltwick (talk) 13:15, 13 April 2018 (EDT)

I'd agree, but regarding the above conversation, is there anything that confirms they are?

Hmmm... I'd say this is a similar scenario in the already split Ice Snifits, which the similarity was coincidental. Sure Nintendo of America tied on the MLSS enemy, but Nintendo and Good-Feel possibly didn't intend them to be the same thing at all. Also, different Japanese names are something that convince me they aren't related, nor the same thing, and just being coincidental. --