Move this and Black Boo to...[edit]

the character section of the Boos template? It just seems right to me.
The preceding unsigned comment was added by Zeta Boo Guy (talk).

I doubt it, these are just the colour of the boos. We should just keep the name because what else could be the official name? -User:O O

If the names are not official, we still have to place a Conjecture template on it, but I believe I recall someone saying that the names came from the game's manual. Could someone confirm this? GreenDisaster (talk) 23:31, 3 March 2013 (EST)

After reading the above comment, I did a quick google search of a scanned manual for this game and Green Boo's name is indeed there. Case closed I believe. -User:O O

Could you tell me where the name appear ? I have the manual and there are only two lines about You VS. Boo :

Once you have met certain conditions in the ORIGINAL 1985 Mode, you can play the VS GAME courses in a 1-player race against Boo!

OK, I found a scanned manual, and this is the only mention of You vs. Boo, or Boos in general, in the whole thing: 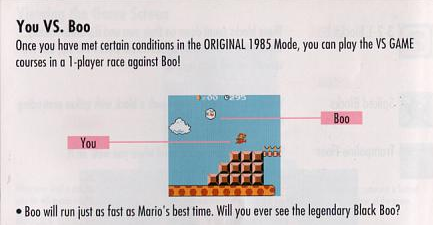 The only type of boo it mentions by name is the Black Boo, so we know that's official now. Red Boos have been confirmed elsewhere (e.g. Mario Party 8), but Green Boos have never been in any other media, so I think it's safe to say that we can call the name conjectural. I'm gonna add a conjecture template to the article and remove the talk template from this section if no-one says otherwise by the end of today, as it seems pretty conclusive to me. User:Tmjjmt 5:59, 15 August 2013 (EDT)


Tying to the above and the things on the Boo page, I don't see why this needs to be an article. At the end of the day, this is just...A Green colored boo. It doesn't have a name or anything noteworthy about it, it's just a regular boo with a recolor. Unlike Red Boo which is pretty clearly treated as a counterpart in the Party series and Black Boo Which has a name, this one is conjectural and is pretty clearly just a recolor used to show an increase in difficulty(You Vs. Boo) or to match the main premise of the minigame(Mario Party DS). As for the Paper Mario section, Not only does the game or her page on this wiki not mention her color, but that game also had a yellowish-brown color of boo that is used on a greater number of boos, and that doesn't have its own page.

I feel like this would be inconsistent with Black Boo, who has exactly the same role and importance as Green Boo does. The proposal says it's because it has a name, but I don't think that's a very good reason since it's not like 'Black Boo' is hard to come up with and they could just have easily come up with the name 'Green Boo' if they needed to refer to it in that one manual as well. It just so happens that they wanted to refer to Black Boo and not Green Boo because it's the hardest difficulty, and therefore you seem to be saying that makes Black Boo more worthy of a page than Green Boo. Hewer (talk · contributions · edit count) 12:04, July 19, 2021 (EDT)

We are considering merging Black Boo with the main Boo article as well.

@Hewer: If that's your entire problem, then why are you opposing this instead of supporting the Black Boo merge proposal?

Wait, the Black Boo is being merged? --