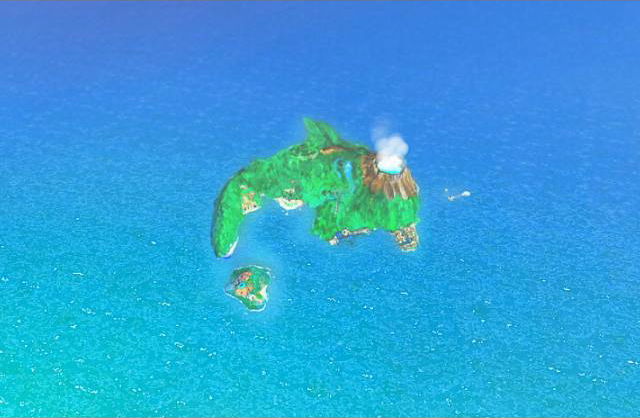 So, you want to know about all of the latest Music around these parts? Well, you got it! Well, the number one hit was the song !!!!!! by Tucayo. It featured Tucayo screaming at the top of his lungs, although it has been known to cause explosions, which resulted in one casualty which made it impossible for one of our guest writers to submit his section. More news on the subject is located here.

Other songs that have scaled on the charts are Ralphfan's I Kissed A Goomba, And Liked It, which Ralphfan made after he saw Ralph Wiggum kissing a Goomba; and Stooben Rooben's Dr. Rooben, a song that summarizes major events that he experienced on the wiki.

The Star Cup will continue on Saturdays on 'Shroom Sportsnet, alongside college football and the NFL on Sundays!

I only have his rough draft. I'm giving him until Thursday. I sent him reminders.

Waluigi got injured. He had been driving around, with Wario, in the Wario Car. They turned sharply and Waluigi fell of the back of the Car. The police came, and Wario had the Waluigi's ID, which is illegal. The police arrested Wario for reckless driving and Waluigi for being on the back of the car. The only time that's allowed is when there's a Double-Kart Tournament coming up. Mario was also arrested; he was speeding on the motorway at over 100mph. Luigi got him out on bail. Birdo hit a police car at over 110mph. She was taken to jail for 6 years. She'll need to pay 3,000 coins to fix the car, or she can just get a new one.

1. Yoshi's Over Under Havoc Addictive Verb Enhancing Animal Island Duel Screen or "YOUHAVEAIDS", for short, is probably going to be the only game with 11 words as a title. Taking place in Yoshi's Animal Island, we see the lovable dinosaurs making havoc for the animals that inhabit the island by trapping their children in eggs, throwing the eggs over lava pits and canyons to see how far they will go, (default high score just OVER 9000!!!) and climbing under the animals to... We aren't too sure, but it looks exciting.
There is also a feature which allows players to make up their own cursing sentences, which the Yoshis will then use on the parrots of the island to make them offend the other animals. Depending on how many verbs are in the sentence, the player gets 10 points per verb. This encourages English and reading, but in a bad way.
This game looks like an exciting one, but we have yet to see if there will be use of the microphone or touch screen. It will be a good way for the under-appreciated Yoshis to get their island well known.

2. Super Mario Galaxy 2, as we all enjoyed playing the original Super Mario Galaxy, this should be extra good. It features Mario doing what he did in the previous game, but he now has to redo this so he can stop Bowser and partake in the Star Festival, where he plans to turn all the Toads and maybe even everybody else if he's lucky into Fire Flowers. As Bowser invades this, Marip is p**sed off and tries to turn Bowser into a Fire Flower, but Kamek stops him, and sends the portly evil plumber into orbit. There he meets Fat Lady, and is granted the ability to turn people into Fire Flower by spinning. Mario becomes attracted to this strange woman, and decides to turn her into a Fire Flower after the credits.
A new feature is the ability to ride Yushie, by hatching him from an egg. Yoshi can trap people in eggs for all eternity, so this makes the game easier.
Luigi will still be unlockable at the end, but his story only changes that he wants to turn all the Toads into Luigis, and maybe everybody else if lucky. Luigi's gameplay is harder, as it takes more than 10 seconds to turn foes into Luigis, but after this, Luigi is granted an extra life.
The game looks almost like a epic improvement, meaning it will be one to look forward to.

Hello, 'Shroomers, this is Mario7727 with your Fake News Interview..Today we are going to interview the paper hero, Jorge Mario!

Mario, was it hard to collect the 7 crystal stars?

Mario: It was hard to collect them. I was going to seven different locations looking for seven crystal stars.

Well, isn't that a lot of things to do.

Mario: Wait a minute, you sound like you don't care.

Mario: Then sound like it, jerk! And I never got the crystal stars until the end because I fought bosses at the end.

Was it hard to defeat the evil Shadow Queen?

Mario:It was very hard, and I was being careful not to do serious damage to the real Princess Peach.

Wow, isn't that a long day of fighting your enemies. How about your partners?

Mario:Oh my partners were great helpers during my adventure to save Princess Peach.

Well, that's it for this section. Thanks to Mario for that interview.

Well, 'Shroomers stay tuned for the next edition of the fake news.

The Cup will continue on Saturdays!

Here to help is is Ollie Williams, from Quahog's Channel 5.

Global Cooling is down!

The Weather is done for the month. If it's wrong well, so what?!

Make a poll! Thanks!

Don't make it! It's invisible! Mess with your friends!

This month's chef is: TAYCE T.!

Produced by Luigi's Arts. In this movie, Mario has to face Darth L to get revenge for his dead brother. It will come some day...or maybe not.

In a three stock, five minute brawl, with smash ball on high, on the stage, Final Destination.

Here are the brawlers short bios:

Zero777: A mysterious man who people may fear of, with incredible powers and have a robotic right arm.

Booman: He's round, He's small, He floats, He has nasty pointy-sharp teeth, some consider him cute, but he is still BOOMAN!!!!!!!! This mean son of a boo will make you run fore your life... literally, you can smash through walls but he can go right through them!

Rosalina: She's the protector of the galaxy and the mother to a race of star beings, she is ROSALINA!!!!! One rule, Rosalina is always right, you mess with her galaxies, she is gonna give a punishment of a black hole-size proportion.

Here are there stats:

Here comes the brawlers, here comes Rosalina, here comes FunkyK38 swinging on a vine, here comes Booman appearing all of a sudden with boos behind him, and last but not least here comes Zero777 coming down then out of a beam of light in his normal form saying his famouse line, "I am Zero!". 3...... 2...... 1..... GO!!, and there off Rosalina uses Star Bomber (side special) on Funky, but Funky rolls out of the way and uses Jump Slam (down special) on Rosalina successfully, but Rosalina quickly got back to her feet and uses her grab and throw Funky off stage and try to use her edge guarding tactics, but Funky gets back on stage. Zero uses his strong smash attack on Funky and Rosalina and they both are sent flying, Rosalina went a little farther. Zero jumps into the air and uses Light Ray (standard special) and it hits everybody twice, he then completly charge up his Shadow Gun (standard special). Booman, being ignored charges up Booman Boo Blast (side special) and release it fully charged, it hits Funky and he is send flying, he almost hits the boundary line but he uses his air-jump then he uses Vine Swing (up special) to get back on stage, Funky gets up, but the wrong way, Zero was at the edge charging his down smash attack and Funky now lost a life. The smash ball appeared, everybody run after it, Zero uses his Shadow Gun and it hits Booman, and sucks in Rosalina and Funky, all of them are launched in diferent directions, but since Funky has low damage he did an air-jump and do a powerful aerial attack, hitting the smash ball, but not breaking it, it flies towards Rosalina and she uses a powerful aerial attack but it still didn't break, when she lands she didn't expect Booman to use Booman Boo Blast on her and she is sent flying upwards and losing a life. The smash ball is flying fast towards Funky but it turn direction, Booman jumps in the air and use Boo Invisibility (down special) to attack it but someone claimed it, Zero uses his Light Ray, and one hit is all the smash ball needed to break. (3 minutes left) Now Zero is getting fatigue, he switches to sword mode, while that is happening Funky runs up to him and uses a fully charges Double Punch on him which sends him flying, but the smash ball didn't break, he uses Iron Rose (up special) to get back on stage. Booman uses Booman Slash (standard special) on Funky, Funky gets damaged but gets away, Booman is now charging Booman Boo Blast and release it on Rosalina, but Rosalina uses Luma (standard special) and the luma is Luma, the strongest one, Booman is lauched but he uses Boo Lift (up special) but the move ran out and he plumets to his death. (2 minutes left) Still having the smash ball, Zero jumps backwards and release the final smash, and Crucifixion is chosen, and it hits Rosalina, she is getting multiple damages and she is launched, sort of far, but she uses Launch Star (up special) and make it make to the stage, but when she got back on Funky uses Head Hit (standard special) and send her to her second death. Afterwards, Zero uses Light Ray several times on Funky then he uses Arm Reach Blast (side special) and ran up to him and use his crouch attack and it sends him flying then he jumps up with him quickly and uses his backwards aerial attack which connects and sends him flying to his death. (1 minute left) Zero charge up his Shadow Gun and launches it point blank at Rosalina, but Rosalina uses Force Field (down special), it reflects and hits Zero, Zero now lost his first life, when he returns he is fatigue and he switches to duo form. Another smash ball appears and Booman uses a fully charged Booman Boo Blast on the smash ball but it didn't break, Rosalina uses an aerial attack but it didn't break, it flies towards Booman and he uses an aerial attack and it breaks, he uses his final smash Ice Cream!, a rain of large ice cream balls fall from the sky, and Zero is dodgeing as much as he can like everyone else, but Funky and Rosalina are KO'd. Zero and Booman are still standing, but the all of a sudden, .....5 .....4 .....3 ....2 ....1 .....Time! Sudden Death.... GO!! Zero rolls backwards and charge and release Shadow Gun but Booman uses Boo Lift and avoid the big damage, he got a little damage, but nothing seriouse, Zero switches to sword form and Booman start charging Booman Boo Blast, about half-way charging, Zero runs toward Booman to end it, but Booman releases the attack on the last minute, but Zero uses The Bible (down special) and reflect the attack and it hits Booman KOing him, .....GAME!

Zero does a few quick sword slashes turns his back at the camera and say with a normal voice "Zero signing out."

Which is your favorite wiki ad??????
Vote here

Here is the intro, which is a regular image. 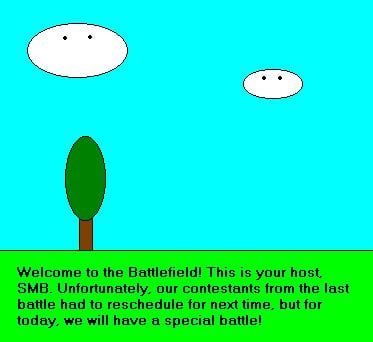 And here is a link to the rest of it.