4 players at once!
Hello, readers. I am MrConcreteDonkey, and welcome to my Should Have Been section. Here, I will discuss, in every 'Shroom issue, things that should have been in a game, and/or the Beta elements of said game. Today, I will be talking about New Super Mario Bros. Wii.

New Super Mario Bros. Wii was a great game on all accounts. It brought back many old features that weren't in the Nintendo DS version of New Super Mario Bros. (which I admittedly didn't enjoy as much), and added many fantastic new features, including the 4-player co-operative mode. However, I believe there should have, and could have, been more to this game.

Firstly, the 4-player mode is fantastic as it is, but there were a few problems. Usually, it's hard to find enough people to play it with, if you even own 4 Wii Remotes. 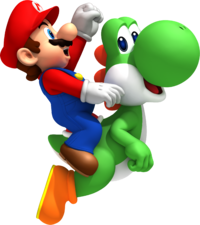 Would you ever look at a Mario game the same way again if you knew that he encourages animal cruelty? That poor Yoshi has no idea that Mario's about to desert him.
So I believe there should have been an online 4-player co-op mode. You would be able to play with other people, even if you are alone and only have one Wii Remote. Plus, it would be much more hectic because you wouldn't be able to discuss what to do at some points. Another new mode that could be added would be a Level Editor, where you would create your own levels. You could've then shared them online and uploaded them too. The Wii has online capabilities and they would have been perfect for this game. You may think I'm asking too much, but games like Super Smash Bros. Brawl have included all of this, and perhaps even more. I was very excited when I heard Yoshi was going to be in the game, and I'm sure most of you were too. However, Yoshi's appearance did not live up to my expectations. He only appeared in certain levels and whenever Mario completed a level with him, he jumped off him before he entered the fortress. That was a very stupid move on Nintendo's part. It's the video game equivalent of going to the park with your dog, leaving it there, then going home. In Super Mario World, Yoshi stayed with you unless you got damaged and lost him. I do not know why this is not the case in New Super Mario Bros. Wii, but it should have been. 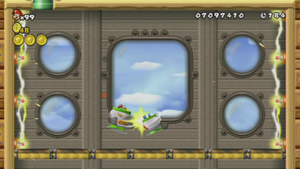 The Mario Car was such a great addition, but it only appeared once.

For some minor changes, I think that there should have been more Airship levels-there were only three in this game and usually Airships have more action than regular levels, because the level is always moving, fast paced, and there are cannons everywhere. Plus, you fight Bowser Jr. at the end, each battle with an awesome innovation not to be seen ever again. I would have liked to see the Mario Car (from one of these boss battles) used in regular levels. I also would have liked to see a Sound Test, where you could listen to the music and sound effects from the game. Plus, in multiplayer, they should have stopped the 'A' button making the player retreat into their bubble. It's annoying and an unexpected way to lose lives.

There also should have been more secrets and secret parts of levels. The new Mario levels all seem more linear than the old ones, and I believe the lack of secrets, like Coin Heaven, is one of the reasons for this.

Enemies Who Should Have Appeared More 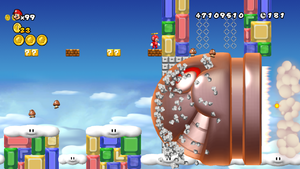 The King Bill is both scary and funny in its own right. 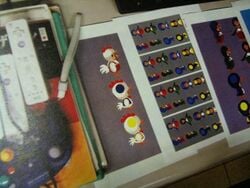 What was Nintendo thinking?!

There were a few major differences in the Beta of New Super Mario Bros. Wii, but most were minor. These are all from E3 2009, so some features, songs, etc. may not have been added or just briefly touched upon. Starting off, the Propeller Mushroom was originally a Propellor Suit, much like the one the character wears when using the Mushroom. The Penguin Suit originally going to have white eyes with blue pupils, which are black in the final version. Also, there is concept art of a bizzare chicken suit, which can be seen on the image to the left. Also seen on this image is what seems to be an even earlier version of the Penguin Suit.

Coins originally had 8-Bit sound effects, and the HUD (the bar at the top) was originally transparent and in a different, more generic font. There were a few unused platforms, including a trampoline, the four rotating Ferris wheel-like platforms (like the ones Reznor was fought on in Super Mario World), a see-saw and a platform that was from two levels in the DS prequel, New Super Mario Bros. More platforms from the prequel were going to be used, including the pendulum platforms from the World 4

Giant Buzzy Beetle
Castle and the one-way gate from World 2-3
The music for the underground, castle and desert levels was the same as the prequel, 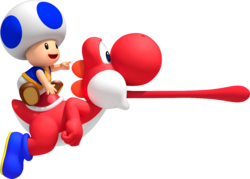 Red Yoshi even had artwork.
as was the athletic theme. Two unused enemies appear in the Beta-one is a giant Buzzy Beetle, whom Mario is able to stand on, and the other has not been seen, but is an object called 'EN_GHOST_JUGEM', which is most likely a Fishin' Boo. ? Blocks were once grey in snow levels.

Originally, Red Yoshis and Blue Yoshis were in the game, but were replaced by Pink and Cyan Yoshis, respectively. After entering a Boss door, you would drop down from the top of the screen, instead of just stand in front of the Koopaling. Finally, the Midway Point flag had a skull on it originally.

Thank you for reading my section. Sorry if I went on a bit. If you think that there should have been something in New Super Mario Bros. Wii that I have not mentioned, please PM me on the Forum and I will mention your idea in the next issue.