From the Super Mario Wiki, the Mario encyclopedia
< The 'Shroom:Issue XCVII
Jump to navigationJump to search

Welcome, everyone, to the April issue of Palette Swap!

We have a special treat for you this month: a new section that will start appearing regularly! Walkazo (talk) has created a special section called "Mario's Boombox," and you can read the first issue here! It's a great section this month- the item being reviewed is absolutely amazing, something you definitely have to read about yourself. You'll get a laugh along with a bit of knowledge about an obscure little title, so be sure to check it out!

As always, we are always accepting new applications for sections, whether your interest is music, artwork, sprites, comics, we'll take it! Just PM me on the forum with your application!

With that out of the way, let's get to this month's sections! ~FunkyK38 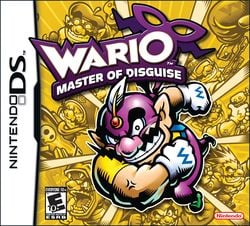 Happy Easter 'Shroom readers! I hope you’ve been enjoying yourself and plan to work off all the pounds that chocolate has given you, otherwise you might end up like the hero of this month's boxart: Wario: Master of Disguise. As you might expect, you can see Wario hogging the cover of this boxart, although the only people on the boxart are Wario again. As this game has Wario take on many different disguises it has all of them displayed and they are: Arty Wario, Genius Wario, Cosmic Wario, Sparky Wario, Wicked Wario, Dragon Wario and Captain Wario. However, there is one disguise I haven't mentioned yet, and that's the one in the centre of the boxart, you see that’s not just Wario, it's actually Thief Wario (so basically Wario just with the ability to jump further). An interesting feature to note about this boxart is that the only colours it uses are Wario’s signature colours: yellow and purple, although the purple is used less so than the yellow. This boxart does a rather good job of summing up its protagonist, self-obsessed: only colours are his ones, and the only person featured on it is him.

For years, I've thought about doing a regular column for The 'Shroom about all the excellent, random-ass videogame-related music out there, but for one reason or another I never quite sat down and actually hammered something out. But that all changes now, with this first of hopefully many installations of "Mario's Boombox" (since I already used me original title, "Mario's Jukebox", for something else). Shameless self-promotion aside, this column is going to be a mix of music based on games, covers or adaptations of game music, and even some stuff straight from the games or otherwise produced by the companies rather than fans. Until I run out of Mario stuff, I'm going to try to alternate between it and tunes from/about other series. Depending on the entry, it could be anything from a single song to a whole album to a highlights reel of any given band or artist. It's not really written as a review, however, hence it's in Palette Swap rather than Critic Corner. If you have any suggestions, feel free to PM me on the forum: I've already got enough material to last me years, but I'm always keen on learning about new stuff to listen to.

And with all that introduction stuff out of the way, onto the actual column, which I am starting with a particularly meaty overview of one of my favourite pieces of Mario media: White Knuckle Scorin' - a.k.a. "the random 90s mix tape". The CD comes with a little illustrated story in place of conventional liner notes, which retells the story Super Mario World, recasting Bowser as an illiterate oil tycoon wannabe, severely lowering everyone's IQ except for sexy brainiac Peach, and featuring literacy as the most potent power-up to be found. Highlights include the confirmation that Bowser's full name is "King Bowser Koopa", that revelation that pummelling his way to victory is one of Mario's turn-ons, and the constant reminders of how Peach is just so damn hot. It was so ridiculous, I had to buy the CD to make sure the scans I found online weren't doctored. Best $12 I ever spent on Mario merch.

As for the music, the opening track is worth an article unto itself. As far as I can tell, "Ignorance is Bliss" was written specifically for the CD by the band Jellyfish, not appearing on any of their own studio albums, just as a single, plus its appearance in White Knuckle Scorin' of course. It's a quirky number in which Bowser sings about his evil plan and his life problems, and inspired an even quirkier fan animation - complete with comic dialogue excerpt and everything. It's all very fun, and not a band tune either. 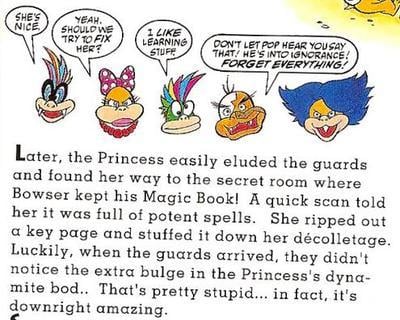 Sadly, the rest of the songs have nothing to do with Mario - even though one band's website implies they did make the song specifically for the CD, not that you can tell by listening to it. As for the other tunes, while some lyrics vaguely fit the Mario series (there's a turtle in one song and internal fires in another, for example), others seem to have been chosen purely because their title fit the dialogue. Like, I honestly can't tell whether the story was written to fit the titles they procured or if they tried to get names that fit the dialogue. There's even a couple cases where it looked like they had a song planned only to fail to secure the rights and/or discover it just doesn't exist. Usually when a song fits in, the title's italicized and bolded and followed by someone saying "song cue", but as seen in the scan here, Morton's "Forget Everything" is followed by the conspicuously silent (and yellow) Ludwig, and another picture has a "song cue" and no song to cue - it's either "Go This Way" or "I'll Take the High Road" or some excerpt of those or a line they actually remembered to remove or rewrite, which I also think happened in the end, when Luigi's "Ouch" gets "song cue"d by Mario. It's all pretty sloppy for a booklet promoting literacy - the periodical random capitalization of non-proper Nouns doesn't help either.

As for the songs that do exist, most fall under the pop/rock umbrella, generally on the harder side, although there's also the folky, acoustic Crosby, Stills & Nash single, "How Have You Been?" (the song with the turtle) to kick it off. "Iron Hand" by Dire Straits is also a more subdued song than the majority, and unlike a lot of the other songs on WKS, this one debuted on an actual studio album (On Every Street) shortly before the compilation album - which I also own, because I love Mark Knopfler. The closing track, "Forever Friends" by Sheena Easton (from her What Comes Naturally album) is also a more of an easy listening pop tune than the other stuff.

As for the fabled hard rock songs, first up is "Magic in the Night", by Bombshell, which, according to this one YouTube video and this fan page is actually a subset of the all-female glam metal / hard rock band Vixen, and like the CSN and Jellyfish singles, was never released on a studio album. Which is too bad because it's a pretty good song; it's got less to do with Mario than the bloody battlefields of "Iron Hand", but seeing as the comic repeatedly insists Peach has a "dynamite bod", I guess the writers figured the all-girl Bombshell tune was a good fit? Ah well, I'm not complaining. Other promo-only songs include "Into the Fire" by Alias, "She Was" by Flesh for Lulu and "Turn On" by Britny Fox; the former is a sorta bland, average rocker, the second is a new-wave pieces and the third has a more classic hard rock feel, as does "Line of Fire" by Trixter, from their eponymous debut album. None of the songs have anything to do with the comic, although the context of "Turn On"'s song cue is, as mentioned before, pretty entertaining, as is the picture accompanying the "Into the Fire" line, where Bowser is shown stomping on Mario for a change.

But I've saved the best lolwhat moment for last, and that is the inclusion of "I Drove All Night", by Roy Orbison - the namesake of our very own Roy Koopa (who even appears with his siblings in the WKS comic). Orbison had recorded the song in 1987 before his death in 1988, and it was eventually remixed and released both on White Knuckle Scorin' and the posthumous King of Hearts studio album, but before either of them were released (in 1991 and 1992, respectively), Cyndi Lauper did her own cover version in 1989 - the same year she appeared in a live-action segment of The Super Mario Bros. Super Show!, coincidentally. I personally prefer Lauper's version, but Orbison's original is good too, and either way, I just find it so amusing that there's a song with the lyrics "I drove all night / crept in your room / woke you from your sleep / to make love to you" in an official Mario product. And besides "Ignorance is Bliss" and the generic, vapid lyrics of "Forever Friends", it's actually the most on-topic tune, seeing as its song cue set up by Mario hallucinating about driving to Peach's rescue in a '57 Chevy, only to have his "Close Personal Friend" melt into thin air as he "gathered her into his arms". Uh-huh.

And on that last bit of weirdness, I shall bring this inaugural edition of "Mario's Boombox" to a close. Most entries aren't going to be nearly this long, but White Knuckle Scorin' is just too interesting to not go through in detail, plus there's lots of artists that need their due credit. The CD certainly dates itself with some of the choices (which, seeing as I was born the same month it was released, dates me too I guess), but it's not a bad mix, and all the songs are on YouTube if you wanna look them up. Anyway, until next time, ciao.

Happy Spring, everyone! I know it’s been ‘Spring’ technically in the Northern Hemisphere for a few weeks, but recently where I live it’s finally started to feel like Spring and less like bitter cold winter. So, to celebrate, I’ll bring you these two sprites from “Super Princess Peach”:

. These two enemies remind me of the flowers that have started to sprout in my garden, although they aren’t pink. Still, a bit of spring color never hurt anyone, now did it?