Whoa snap it's your main man TFP (S-Y for you slow pokes) bringing in that new good good for The 'Shroom, the sequel to the prequel shit I don't even know what im talking about right now but the point is last time we did Paper Mario for the N64 & now we about to step it up to the 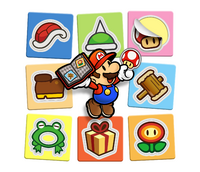 YEA we talkin' about Paper Mario: Sticker Star for the 3DS! Damn fasten those seat belts cause we ain't got insurance like Wario's piece of shit bike.

Ok I gotta say it came out about a month ago, it wasn't too bad...shit what am I saying, this game was a piece of fuckin' garbage man. I want Nintendo to bring back the classical RPG elements that made the series so good. Lemme talk it one level back for a minute, you see, Paper Mario & Paper Mario: The Thousand-Year Door were excellent, they had the best everything. Yea man, the best everything, 10/10, no problems, you could replay those games for days & never get bored. Now Super Paper Mario came out and flipped shit to a whole nother dimension. The game wasn't so bad, but it wasn't really a Paper Mario, know what I mean? It's a sidescroller, but doesn't live up to that previous level that the first two put out for us. Now when Sticker Star came out, shit this game changed the whole "game". No partners, just some Amazing Flyin' Hammer Bro. annoying flying bitch sticker that lets you paste & remove stickers in the overworld. Oh, and guess what, this is also somewhat of a platformer as well. I don't even know how to classify it, there are fight scenes but they really, really suck. Well now you know a bit about this game, so let's get to the core shit about why I (and many other fans) dislike it oh, so very much. 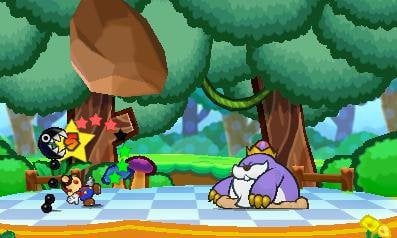 This is how it shoulda been =(

Typical fuckin story. Ok it's all good we're in mothafuckin Decalburg chillin and the Sticker Comet comes by its like woah snap this is some mystical shit right here, but that one motherfucker crashes the party and takes that one bitch to that one castle. The story begins, you gotta collect some Royal Stickers to counter the last & most powerful one on that one motherfucker's head. You clean up the mess, and you get a Hammer, and that's it, you can't upgrade to like Super Boots and whatnot. No Star Points, No Flower Points, No Badge Points. A tear went down my face as I saw the horror of all this. TWO PAPER MARIOS IN A ROW WITH NONE OF THESE? My heart was broken, oh man, unrepairable shit. Anyway, off you go on your journey blah blah

Now you start off in the jazzy town of Decalburg, and already paths to the six worlds in are unlocked for you so you can play them in any order (with the exception of Bowser's, dummy). Graphics were superb, I really liked that one thing they added in the Sticker Album where you tilt your 3DS and it reflects off, kinda making it feel realistic. Nice touches here and there, but what about the core gameplay? In battles, you do fight enemies in a battle scene type of thing but you can only attack the enemy thats in front of you, and can't hit the people in the back. I was like, is there some hidden combination or something that allows me to choose? But no, they just wanna make your life miserable but fixing something that wasn't even broke. To make matters worse, you gain no experience fighting so whats the point? They don't even give you anything, a few Coins if you deal damage while their HP is zero so why even battle? While it may seem pointless, sometimes it's fun because of how you battle; by using your wide range of stickers that you find, like Slaphammers and Iron Jumps, there's too many to count. You can even find stickers that are objects and use them in battle or the overworld. For example, if you found a Fan, you can place that somewhere in the overworld to blow something like a windmill, or you could use it in battle to do massive damage to all enemies. Kind of a unique idea, but poorly executed imo. Why I say this, is because the boss battles were fuckin intense. Holy shit, the enemies are little pussies compared to these guys. And some of them have weaknesses that you don't even know, you gotta go back to this one weird object -> sticker converter guy in Decalburg that makes your objects -> stickers and theres like 100 of them, so you'll be at this shit for days trying to figure out which object works the best against which boss. There's even some drug dealer that sells you objects beside this guy, that guys cool man, but I ain't saying go do drugs yknow. Overall it is pretty unique, but massive improvements could be made.

I swear, this is the only legit object sticker. Everything else is a fucking appliance or retarded thing like a balloon.

Some complaints I have are that once again we have a classic 3D sidescroller (if that makes any sense), like each screen is kind of like a typical PM or TTYD screen but you can keep progressing until you hit a star block thing like from SPM. Oh, and i'll mention that for the first time we have Kamek, not even that ol hag Kammy, like what happened did she die? Idk they just fucked it up kind of with all this new bullshit. Oh my god, I have to tell you, I literally got stuck on a boss because they had spikes on them, and I only had Jump stickers left. Like, gimme a break, this guy has a Hammer in his inventory and he cant even use it? What the fuck man, just what the fuck. It's kinda flawed like that, the sticker system that is, you shouldn't be having problems like this in 2012, a game from famed Nintendo, and arguebly one of the best series around. A Paper Mario game should be fun, fair, and of course, RPG-esque with no fucking bullshit stickers god damn I've had enough of stickers like I peeled one off my wall irl cause this game made me mad (TRUE STORY).

The Music/Sound in this game is very jazzy and nicely polished. That's one thing I like about this game, it sounds old school and fresh. Like listen to these, they sound so cheery, like any other PM game I guess. Sticker Star definitely has some tracks to make you get off your feet and just groove to the funky vibes yknow B) The sound effects are really nicely done as well, they actually feel like some real effects as if this shit were happening outside your backyard or something.

Overall, Paper Mario: Sticker Star was a pretty decent game, but i'd say probably the worst of the series. If you haven't played it yet I don't recommend you do, unless you're a diehard fan like me. Save your money for something like Luigi's Mansion 2 or a Wii U maybe (hopefully a Paper Mario 5 comes out for that and that will be the savior of the series!) I'd say this game is about a 5.5/10, with major flaws here and there, some bad platforming, and sometimes just too fucking challenging that you're like fuck this I'd rather go play TTYD again. (True story, that's actually what I did after this piece of shit.)

I hope you all enjoyed my review, seeya around!