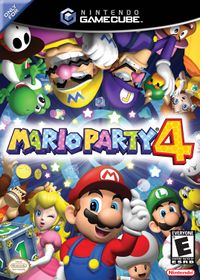 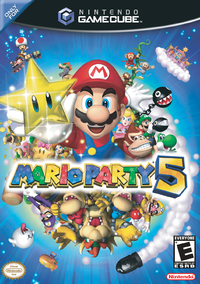 Mario Party 5
Hey everyone, and welcome to Should Have Been More Committed Last Month, in which I review what Should Have Been in games, and their Beta elements. Now, Mario Party 9 has only just been released over here, and I haven't been able to get it yet, but we have the next best thing: Mario Party 4 and Mario Party 5. I'll cover Mario Party 9 next month, when I'll probably have it, and I'll have had a good time to play it. Sorry, guys, but I don’t think this is going to be very long. :(

What should have been in these games?

I liked both of these games a lot. MP4 was the first game I had ever played in the Mario Party series, and it gave me a good impression which Mario Party 8 totally ruined. 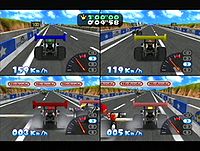 Look at the image. Spot the human players.

The Warp Space.
Okay, we'll start, naturally, with Mario Party 4. Out of the two, it's too hard to say which game I prefer the most. But, in both, there are a few things I would have changed... Starting off, on the whole, the minigames were very good. Most of them were great fun, and had a good variation, but there are a few I had problems with. First, Mario Speedwagons. I don't know if it's just me, but I can't get anywhere in that game. I can't even move. The controls are explained pretty badly, and I'm sure it's not a problem with my controller, so what's up with that game? Next, luck-based games like Hide and Go BOOM! are frustrating, as it really doesn't take skill to win them, just luck. Games should be based on skill, and, while the luck can spice things up, it, again, is frustrating at times. Panel Panic is another one that was luck based, and I was pretty confused on how that worked for a while. On the subject of minigames, while I believe quality over quantity, I think the game could have fit in a little more minigames. Even returning games from the first three would be fine. 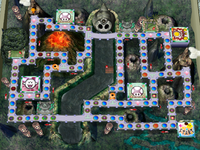 Next, the boards look a tiny bit bland. While there are a few interesting things in the background, and around the board, all the spaces are on an ugly, grey...platform thing, which, for some reason, floats above the setting of the board. Why couldn't it be like the last games, where you played on the board, rather than above it. Another qualm I have about the boards are those Mini Mushrooms. I don't like how some areas have a Gate thing in front of them. I'd prefer to be able to explore the whole board, and have access to everything there without a Mini Mushroom. Plus, there's way too many Mushroom Spaces and Warp Spaces on the boards, and the Warp Spaces were a bad idea in the first place. Additionally, I think the chance of winning in the Lottery Shop is too low, and should have been higher.

Finally, I think by now the game could have added a few more new characters, like Toad. Honestly, I really liked this game. I can't find much else wrong.

Well, where do I begin?

Really, I need to talk about something!

Donkey Kong's been demoted. Why is he so happy?
Well, uh, I don't like luck minigames, and Mario Party 5 had Scaldin' Cauldron. Now, even though I don't like them, I'm usually okay with them, but this is not okay. This is a Bowser minigame, meaning that, if you lose, you could lose Coins, or even Stars. I mean, getting punished for losing something luck-based? That's hardly fair. Next, why did Donkey Kong stop being playable? I know he's now got the DK Spaces, but, honestly, there's only one-per-board, 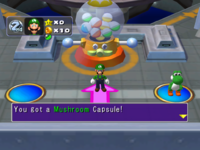 The Capsule Dispenser sounds funny: "DUM DUM DUM DUM".
so, even though they help you, the low chance of landing on one outweighs the good points, in my opinion. I think he should have been playable again.

Next, the boards are pretty good. They aren't just flat anymore. However, I don't think the gimmicks and events on the boards aren't as good as in the previous installments. This game, as many others do, also seem to suffer from the problem of long waiting times, especially in the minigame Card Party. The gameplay of the Super Duel Mode is also pretty slow, albeit that doesn't stop either from being great fun with friends or alone. Finally, while I liked the Capsules, I think items could have returned as well as the Capsules, but that's just a minor complaint, like all of these are, really.

There weren't any beta elements in either of these games, which is incredibly unrealistic, because planning a party in real life isn't like that at all. You have to change a whole lot of stuff, and sometimes people don't even come!

Sorry it was so short, but that's all I can think of for that. Got a suggestion? PM me (Godot) on the Super Mario Boards and tell me. You'll get mentioned in the next issue if you do. Until next month, I bid you adieu.