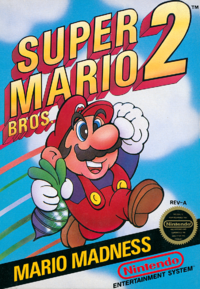 Super Mario Bros. 2
Hey, everyone, and welcome again to Should Have Beans Been, where I write about stuff I think should have been in a game.

Here are the PMs I got this month:

"You should do Yoshi's Story, Super Paper Mario, or Mario 3! Please!"

Hello, shockwave. Sorry, but I don't have Yoshi's Story or Super Paper Mario. I have Super Mario Bros. 3, though, so that's possible.

The next PM was from Master Koopakid (who is known as Wayward Vagabond on the forum). He asked...

Would you mind if you did SMB2 for the Should have been section on the forum? I actually don't have the game, but I've played the remake. It has tons of beta content that would be cool to report. Can you please do it?

Hey, Master Koopakid. I definitely can cover that game. So, after a few moments of considering, I'm going to be covering Super Mario Bros. 2. Don't worry if you made a suggestion last month, I may get round to it next month or so. 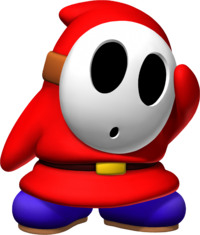 This lovable little pile of secrets is saluting the game that brought him into being. Probably.
Okay. Some people didn't like this game, but I actually do. The music is good, the graphics are bright and the stages are designed rather intelligently. Yes, it's just an edit of Yume Kôjô: Doki Doki Panic, but why does that matter? It doesn't stop both from being good, albeit the same, games. And without the edit that was Super Mario Bros. 2, we wouldn't have Shy Guys, Bob-ombs or Snifits becoming regular enemies.

But the game isn't exactly perfect. First, there's three levels per world, and seven worlds. That's a bit of a strange way to do things, but okay. Eight worlds and four levels could have worked better, but I guess the levels are bigger, so that's fine. After a level, if you collected any Coins, you had to go through that slots minigame until you ran out of Coins. I feel that part should have been skippable, or Coins should have had some other use. Also, there are way too few 1-Ups in this game. By winning said Slot minigame, which is quite hard, you can get extra lives. That's the only way I can remember, and it's too hard. Why does that Potion thing contain a door? Shouldn't it contain acid, or something? I mean, the only instance of a door being in something like that is...well... 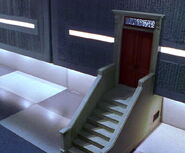 The game got kinda lazy with the bosses starting at even the third world, where you are, yet again, 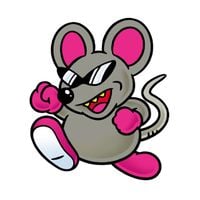 Here. Have some bombs.
forced to have some Bombs. Yes, the fight with Mouser in World 3 was a little different than the fight in World 1, but not enough. At least Super Mario Advance changed the World 3 boss to...to...oh god...Ro-Ro-ROBIRDO. GOD, THAT THING REALLY CREEPS ME OUT.

Oh yeah, and that fifth Mouser was albino.

But the point I'm making is that the game should have had more different bosses. Yes, it's still better than Super Mario Bros., but I'm sure they could have done it in Super Mario Bros. 2. I find the game gets too hard too early, and should have been a bit easier. Especially the part with the Whales. Also, the game's ending credits were developed very poorly. They should have spent more time on that, in order to make fewer mistakes.

Otherwise, there's not much else to say. Since this is an NES game, I can't really say "PUT KING BILL IN THIS GAME GUISE!" It would have been nice to see some Super Mario Bros. enemies, yet this game wasn't originally developed to be a Mario game. Still, since the designers changed the sprites of the four playable characters in Doki Doki Panic, I guess changing a couple of enemy sprites wouldn't be a hard feat, or even adding some. I think Goombas could have worked well in Subspace, considering that place had the original Super Mario Bros. theme and a Mushroom inside. 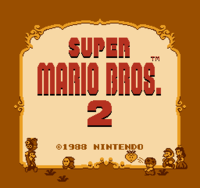 The prototype's title screen.
You wouldn't usually expect loads of beta elements in an NES game...well, at least, I certainly wouldn't. But Super Mario Bros. 2 surprised me.

In 2005, a prototype copy of the game sold on eBay for $350. In this prototype, there were many differences:

Starting off, the title screen was primarily gold-ish-colored in this prototype. The story also took out a word, and added one. The character select screen had an ellipse after "Extra Life", as did Super Mario All-Stars. The player also had the chance to select a character after they lost a Life, which also is what happened in Super Mario All-Stars. At the start, the game gave the player 19 Extra Lives to start off with, instead of the standard 2. The game allowed unlimited continues in the prototype. Mario, Luigi and the princess all have visible sclera (the white of the eyes) in the final version, but do not in the prototype. There are a few sprite changes, with the Princess's face being quite different (and creepy-looking). The height at which objects are held is also different for everyone except big Luigi.

Many of the differences present were the same as Doki Doki Panic: for example, the Potion was replaced by a Magic Lamp (that makes too little sense even for Muppets in Space...), the Waterfalls fell at the same rapid speed, the

button couldn't be used to run, the Scowling Vegetable in World 7 looked the same as Doki Doki Panic, 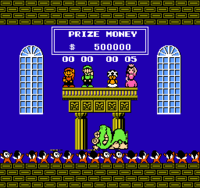 The ending with the Prize Money.
and there was no Phanto in the room where Birdo is holding a Key. Wart, as in Doki Doki Panic, took just four hits from Vegetables to be defeated, and the Bonus Chance screen was virtually the same.

The game was not finished in this version. In the storybook intro to every world, some worlds' names were unfinished, and World 7 had no scenery. There were also a lot of unfinished animations. There was some beta music to this game: for example, the Underground music was a remix of Super Mario Bros.'s, very close to Super Mario Bros. 3's. The Starman theme used the scratchy percussion instead of the wood block. There were a few different sounds, too. In the ending, the words "THANK YOU" appeared when the player released the Subcons from the jar, and, as Wart was being carried away by the Subcons, a total of Prize Money appeared: the less deaths the player had, the more prize money they got. The very end did not show Mario sleeping, but, instead, just "THE END" in a much less swirly font.

Finally, there were a lot more glitches, including one with the ending and one with the character select, among others.

That's all, folks! Don't forget, if you want me to cover a certain game next month, or a certain beta element, or just want to talk about the section, PM Grand Wheelie on the MarioWiki Forum and I'll be sure to include your personal message in the next issue! Bye now, and, if you see Smasher, please tickle him while wearing a salmon suit.