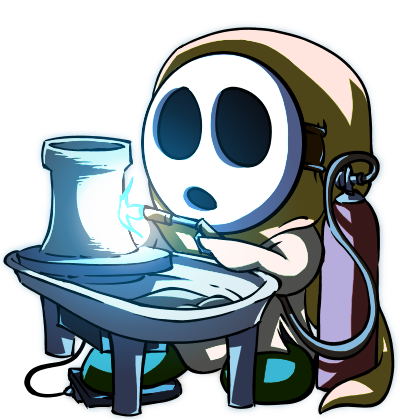 Let's do this one last time. For real, this is the one.

Well, readers, I made it- despite the last year or so, it's time for me to head out. I hope you're prepared for an unforgettable leaving speech. I am pleased to announce that Zange (talk) will be my successor, starting from Issue 151 onwards. While I'm sad to let this team go after 4, 5 years of being led by Englishmen, I'm confident in Zange's capabilities and I'm excited to see what she can do with Pipe Plaza.

Looking back to the end of 2017 when I was appointed as this role, I had no idea where I would take it or what heights or depths it would reach. I'm delighted to see Pipe Plaza being voted as the second favourite 'Shroom Team in this year's awards, and consistently presenting 8 teams for what felt like many many months was a pleasure. And this month is not just a celebration for the past 20 issues of my iron leadership, but also for a special milestone for the paper and community as a whole. So, we did it; we reached 150 issues, and still growing. The fact that we've reached this number without showing any signs of stopping is just phenomenal- I'm just amazed. Thank you all so much for supporting this paper and helping it grow, and I hope you take the time to go through all of the special projects we've put up today.

A special thank you goes out to Alex95, Superchao (and all of his interviewees), LudwigVon, Lakituthequick, Hooded Pitohui, Raregold, Yoshi876, GPM1000, and the Poll Committee for contributing to this team. You're the ones who make this page what it is and I'm truly grateful for that.

I'll be back. In what form, manner and date is up to me, but I'm not forgetting this team or community and I hope that the same could be said of the reverse. For one final time, enjoy the read. It's a small one today, but I know it's going to grow under its new monarch.

The ongoings of the Mario Awards.
[read more]
You heard the word from the bird? If not, read this!
[read more]
The best analysis of the polls around!
[read more]

“Yeah I think the biggest problem was somebody killed me. If we could fix that for the next game I'd be a 10/10.”
—Chester Alan Arthur (Talk Page · Forum Profile)

Good day dear folks, to the last Anniversary Announcements of the season! And a small one at that, only tournament information this month. The last Committee Interviews are below those though, check them out!

In the table below, you will find the last information about the remaining tournaments.

Welcome to Committee Interviews! In this part of Anniversary Announcements, I will do short interviews with the members of the Awards Committee, so you can get to know them a bit better! This month, the other two of our newest members: MsRetroGeek and Roserade!

Again, it shows that being new to the Awards Committee is in no way a hindrance to performing well. People with varying backgrounds and interests are right at home here.

And with that we have reached the end of the season! I hope you enjoyed this run, and I hope to see you again, next year. Bye!

All information above was correct as of 21 September 2019.
Sprite credits: Daniel Sidney, Jefelin, Tailikku (tSR)

Hello, 'Shroom readers! September has killed your lovely Director dead. Rest in peace. Yet I come back from the grave to bring you an interview with Hooded Pitohui. Enjoy!


Conclusion:
I'm very tired, so the Interview will speak for itself this month. Thanks for reading!

You know who I am, and you know what I do. Archagent Everlasting here with some exciting poll content! As if you didn't get enough of me already with the analysis, am I right?

The Tenth Poll Commitee has finished our incredible series of Awards Analysis, which most of were contributed by yours truly. I know, I know. Hold your applause. Let's get right into the polls!

Would you like to see the Mario franchise to crossover with other series outside of Super Smash Bros., in a similar fashion to the Mario & Sonic series? (ArchagentEverlasting (talk) (That's me!), September 1, 2019)

What is your opinion about the Nintendo Switch Lite? (Power Flotzo (talk), September 8, 2019)

That's about it for this segment for this month. This your favorite host, Archagent Everlasting, signing off. Auf wiedersehn!