The 'Shroom:Issue 150/A Touch with the Music

A Touch with the Music

Welcome to the special review written by me for Issue 150, since I barely contribute for The 'Shroom. If you think about it, the last time I wrote anything for it was tons of years ago. This review is exciting even for myself because I am about to tell you about my favourite YouTube channel, which is TwoSet Violin. 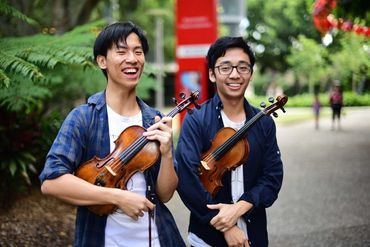 TwoSet Violin, Eddy on the left and Brett on the right

A classical music duo, Brett Yang and Eddy Chen started a YouTube channel since 2014. They started off by creating violin covers of pop songs and movie music, and moved on to comedy videos. Their inspiration of these successful comedy videos came from Ray Chen, who also has a YouTube channel and do comedy videos and compilations. Both Brett and Eddy have grown up playing the violin, and went to Queensland Conservatorium as violin majors. Unsurprisingly, their reason for picking up the violin is common: "My parents told me to." But they certainly did not regret on picking up the instrument as they have created a community and inspire lots of people to learn music. They met in the math tution class when Eddy was 13 and Brett was 14, and played in orchestras together since then.

When you browse on their YouTube channel, you might think that they don't look like proper musicians, but they are the real deal. They have been a part of multiple orchestras, including the Sydney Symphony Orchestra, Queensland Symphony Orchestra and the Melbourne Symphony Orchestra. Brett was awarded the prestigious Brisbane Club Scholarship while Eddy was concertmaster of the Queensland Conservatorium Opera Orchestra in 2012 and 2014. The duo started their classical comedy shows at the end of 2016, and had their first debut at the Sydney Opera House. Their concerts are unusual compared to the normal classical music concerts - it’s a show that attracts a diverse crowd and gives people doses of laughter - which noises are not welcomed in a classical music concert! They created a Kickstarter in 2017 and commit themselves to busk in the streets of Sydney until they reached their goal for a worldwide tour concert. They succeed and launched their world tour from 2017 until April 2019. How does one play for the president in G20 is they are not the real deal?

These are some fun facts about their concert world tour! They need coffee to pump themselves up over the nervousness before the concert, and they refuse to eat before the concert starts. Props are always a special element in their shows, which Eddy dresses up as a female or the Viola King throughout the show. Audiences are encouraged to bring hula hoops to the concert as an encore segment for TwoSet to play the violin while hula hooping - specifically playing 24 Caprices For Solo Violin by Paganini. Sometimes, a special guest might appear at the halfway point of the show - you’ll never know!

This doesn’t mean that they halted their activities on their YouTube channel! They upload videos in a fast pace, and the content is always entertaining. From the funny skits to their reaction videos, each one educates the watchers about classical music in a funny yet unforgettable way. I can't forget the meaning of the word “pesante” forever from now after they made the funny joke about being a peasant! They are also known for reacting to violin performances that are disappointing, and lots of memes have been born by their own hands.

Thanks to them, a community dedicated to them is getting stronger than ever. To be specific, they created tons of communities. We have the Twosetters, the Viola Gang, Ling Ling wannabes… which are all in one, but they have so much content for everyone to enjoy and they always encourage us to practice! The biggest question for newcomers who watch TwoSet videos will be: "Who is Ling Ling?", which I will explain.

Who Is Ling Ling?

The exact origins of the birth of Ling Ling is unknown, but Tiger Mom (A character portrayed by Eddy in skits) once mentioned Ling Ling as a person who won all the competitions in the first place, and practices forty hours everyday. There is nothing that Ling Ling can't do, and is compared to the perfect kid Asian parents tend to speak of to their own children. In short, Ling Ling is a child prodigy who is better than anyone and it’s all because of the hard work of practice. Since then, the TwoSet community has another nickname of being “a Ling Ling wannabe” and we definitely wish to gain the power of Ling Ling and practice a lot! Of course, there’s no exact answer to the meaning of Ling Ling, and it’s up to everyone to decide who Ling Ling is, what Ling Ling is. For me, Ling Ling is the embodiment of practice. When I practice, I know that Ling Ling won’t be disappointed.

Inspired by PewDiePie's LWIAY, Ling Ling 40 Hours is a segment of TwoSet reacting to memes submitted by the community in reddit, which is r/lingling40hours. The intro song is based on PewDiePie's version, and recently the intro has changed into the parody of 20th Century Fox logo. It was initially to be uploaded once a week, but the actual uploads of Ling ling 40 Hours are inconsistent. Most of the content in r/lingling40hours are Ling Ling jokes, memes related to TwoSet’s videos, other violinists, and fanart of TwoSet.

Ah, the overrated candidate and somewhat became a joke among the community "Is it another charades?" The violin charades are usually mini games between Brett and Eddy themselves with a specific theme, and they have to guess the stuff out by usually playing the violin. No body language, no talking, and a time limit for each of them. Spoiler: they never follow half of the rules - the body language is always strong. They usually play rock paper scissors to determine who goes first, and the game starts. Fun fact, the video with most views is currently a violin charade!

This can be two sided as they have reacted to amazing violin performances, or the ones that are a cringe fest. They have reacted to a lot of violin competition videos, which young violinists perform and their skills are exceptional good. TwoSet will usually try to sight read the pieces on sight to demonstrate on how tough the pieces are, and leave us all in awe. One of the notable memes that has been born from reacting to child prodigies are the page turner that looks lifeless. Meanwhile, the other side of reacts are violin performances that are plainly disappointing, cringey and ridiculous. These include TV shows/ movies/dramas which feature violin playing, talent shows which has violin contestants, and the people who plays Flight Of The Bumblebee with zero musicality. Yes, the two people, Ben Lee and Vov Dylan. They are the main sources of memes in the community, and it was so funny when the Guinness World Record canceled “The Fastest Violinist” after TwoSet uploaded videos that criticize their playing.

This is a segment which they prepared a list of handicaps and a list of violin pieces, they will pick one each and create a combo of challenges for themselves. As the Ling Ling workout gets more entertaining, they step up the game by inviting special guests and let them challenge the workout. Special guests are usually violin soloists, but there is a case in which a piano is used instead of a violin, which Sophie Druml was featured. A notable version if Ling Ling workout which is the Ling Ching Workout, is a nice twist of the challenge itself.

Some insights of Brett and Eddy: They are usually active on YouTube, but their social media accounts aren’t bad too. Twitter is usually the one which they will reply comments, and they have a variety of active social media accounts. These platforms include Facebook, Twitter, Instagram, Snapchat, and TikTok. They also travel a lot, based from their stories and posts from their social media. One of the things they do during flights is playing Super Smash Bros Ultimate, which Brett uses Lucario and Eddy uses Peach as their main characters. Both of them dedicated their love towards coffee by having coffee in their daily life. Eddy likes listening to K-pop and Brett’s violin has only one fine tuner. Brett has a huge craving towards bubble tea and Eddy gets ticklish pretty easily. Eddy is scared of cockroaches and Brett does not have perfect pitch. 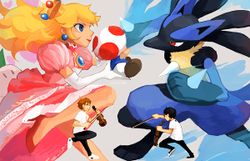 Art by @deeyee_drawing, a battle between the musicians!

They have created so many videos throughout the years, and has collaborated with a lot of great musicians including Ray Chen, Hilary Hahn, Janine Jansen, ZiYu He, Benny Chen, Sohpie Druml and more. Despite the countless memes they have created (Allow me to put in some that I like: Sacreligious, aMAZING, geniuses are born not created, it’s practical!), I think they have built up a generation that’s interested in classical music despite the image of "bald, old, and greasy musicians". Learning classical music can be tough, but it can be fun as well. TwoSet Violin did well on introducing classical music to as many people as they can, and let the beauty of classical music to be known to the future generations.

Thank you for reading my writing, and hope to see you soon!