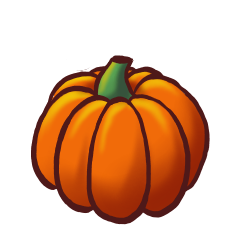 G'day there, dear readers, and welcome to The 'Shroom's official Halloween-themed Scavenger Hunt! We've run these sorts of things in the past, but we always overcomplicated and made the hidden objects a bit oblique, so this time around we've decided to streamline the process. You see, all the objects required to be found are just edited versions of the same object... indeed, they are all pumpkins! Glorious, orange pumpkins! We feel by making all the objects roughly the same will help simplify the process, since you'll know exactly what it is you're looking for, meaning it's just a matter of finding where they are exactly.

There are 14 pumpkins in total, including one on this very page! ...what, you mean it's clearly visible on the right-hand side of the page image? Ssssshhhh, don't spoil it for the kids, it needs to be a ~surprise~... OK, so it's actually 13 pumpkins, but semantics! The pumpkins are exclusively hidden across pages for Issue 103 of The 'Shroom, so don't go looking anywhere on the Wiki, in previous 'Shroom issues, or in our permanent {{shroomfooter}} pages, since they won't have any. Keep focussed on this issue, and this issue alone, and make sure to pay attention to everywhere! Images, text, backgrounds; everything!

We are, indeed, giving away tokens for anyone who plays the game, based on the relevant achievement pertaining to event victories on The 'Shroom, which can then be repurposed for use in earning prizes in the MarioWiki Anniversary held every year in August! All for finding a bunch of oversised vegetables! I think that's a great deal, don't you? Plus, don't you want to see all the cute little pumpkins in their prime? Just PM me the precise locations of all the pumpkins via my forum account once you find them all, and PLEASE NOTE I said precise locations. I don't want any broadscope gup like "oh, it's on the Fake News page!" or "it's in ____ section!", I need details, or else it doesn't count.