In SMA2:SMW, on the map, hit a direction on the d-pad that'll cause you to move and hit Select simultaneously. Then from the level list, pick somewhere different from where you are and teleport there (obviously only works if you've unlocked this capability). You should move from your new teleported location in the direction and distance you would have traveled from your previous location. Allows for a lot of glitchiness, but a few levels are accessible that aren't otherwise (i.e. the TEST level if you end up on a Star Road teleporter). Miles.oppenheimer 22:49, 18 May 2010 (EDT)

I don't think that that is a glitch in the game. It can be performed in the GBA remake as well.

Recently when I was playing the GBA version of Super Mario World, i noticed part of the Wiggler was absent. The level was one of Forest Of Illusion, not remebering which one. Danimario9 16:43, 23 January 2012 (EST)

Is the thing about the infinite cloud ride really a glitch? I thought this was common knowledge. Then again, I haven't played SMW in a while so I may be wrong... Banjonator1

I removed this example because it makes no sense, as forest of Illusion 1 doesn't have any Chargin' Chucks in it.

I think I found a new glitch. "In any level with Yoshi, spin jump off and spin jump again onto Yoshi and keep pressing

From personal experience, I can tell you that, in addition to wigglers, Dino Torches that are breathing fire can also hurt you if you try to eat them while running.~~

In the article section it says that the orb glitch can't be done on VC, but it can. I have done it.

In sma2, I found a glitch that if you slide down a slope, and slide off of it keeping the "sit" pose, pressing A while in midair causes the player to jump in midair. Also is the "Yoshi" 1up stomp glitch added? (Happens if you jump on Yoshi, then press the spin jump the instant you mound on Yoshi (doing this causes the player to jump off Yoshi as if they were in midair) and causes the "consecutive stomp" counter to increase, if Mario jumps on an enemy after this, it will continue from that point on).CoinBro (talk) 00:07, 26 June 2015 (EDT)

I found one! On the First Castle ( The one of Yoshi's Island) you need to be big Mario. Grab the P-Switch and hit a turtle of the fence. After that,press the up botton to climb the fence. If you did right,Mario will up the fence while grabbing the P-Switch
The preceding unsigned comment was added by 179.199.25.39 (talk).

Wait till you're Autoconfirmed which will be in 4 days, until then make at least 5 edits hope this helps. The RPG Gamer (talk) (edits)

I was playing Super Mario World on the 3DS and this happened. Is it possible to do this in the original version? Sorry if it's already on the website, I skimmed through the list of glitches and didn't see it mentioned.
The preceding unsigned comment was added by IdkOnPop (talk).

Heh, good catch. We do have falling through the floor covered, but how'd you manage to do it in that area? Did you get hit and mount Yoshi at the same time, or did you do something different?

I dunno about it being removed in the Virtual Console releases. I tried it on the Wii U Virtual Console, and the glitch worked. Thefamman (talk) 11:51, 5 July 2017 (EDT)

Item carry while climbing on grid[edit]

Mario can carry an item while he climb on grid. To do that, launch the item over, then climb on the grid, and finally, press Y while the item go down on Mario. If executed correctly, the item and Mario will superpose.
The preceding unsigned comment was added by 109.128.126.126 (talk).

You can do that on vines as well. It's a fairly well-known technique and was likely intentional on the developers' part, which I'm assuming is why it hasn't been added to the list all this time.

I wanna my glitch is in that article :/[edit]

I wanna my glitch was in the general article, I thinked when I submit it to talk page moderators will see this So this is my glitch: On start of game Clicking Power button and next Clicking and holding Power button will cause startup play slightly pitched
The preceding unsigned comment was added by Janekonkon (talk).

Eating a berry during death[edit] 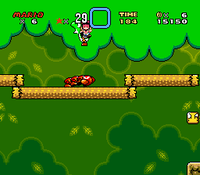 Red is where damage was taken, black is Mario's position, and green is Yoshi's position

This was in Forest of Illusion 1, and the game froze. I got on Yoshi as soon as I touched the wiggler, and then he ate a berry on the way up. TheRexor28 (talk) (dont have a username or talk cuz i made this account just for this)

I found a new glitch while just playing through, but basically, this is how it goes: In Star World 4, the player must be small Mario and grab the baby Yoshi at the beginning. Afterward, you must eat some koopa troopas. However, when you get to the part with two blue koopas on one platform, eat the koopa on the left (at least, that's how I did it). This has to be the koopa that turns the baby Yoshi into a grown Yoshi. At the same time you eat it, Mario will die (I couldn't tell if it was the koopa on the right or the koopa on the left that hit mario, but nonetheless, he was hit). Yoshi will grow and Mario will jump upward at the same time. However, once he reaches the peak of his upward movement, Mario will stay in place for a few seconds above Yoshi. After that, though, Mario will fall down again for the rest of his death animation, but will also mount Yoshi, still in is death sprite. This will force Yoshi through the mushroom platform and both Mario and Yoshi will fall to the bottom of the screen. As far as I know, this glitch is undocumented, but tell me otherwise if it's been documented.

EDIT: okay, so after unsuccessfully trying to replicate the glitch, I found that the Baby Yoshi grows after eating both of the koopas, so I think that in order to get hit, the player will have to also perform a glitch similar to the getting hurt while on Yoshi glitch.

EDIT 2: I found yet another glitch in the same level. If you go to the part with two parakoopas and create a certain setup where you and the baby Yoshi are facing the pipe on the left, then jump on and eat one of the parakoopas in a certain way, as the Yoshi grows, he will glitch to the top of the pipe , although after reaching the top, the game will continue as normal.

EDIT 3: I also found something that I think is a glitch, but I'm not sure. I have some footage here, so if anyone can, analyze the footage I have to make sure, but basically, I think the baby Yoshi is growing due to a weird setup.

EDIT 4: I couldn't get the file working right, so I uploaded it to youtube in order to be seen. Here is the link. https://www.youtube.com/watch?v=gKzn_saTS50

EDIT 5: I found yet another glitch in the same level which I also performed in a previous level. Basically, from what I saw, I think an enemy overlapped with Mario and Yoshi while he's growing, and afterward, you won't be able to be hit by enemies.