Hello, dedicated gamers! it is I: Luigi time! it's great you are checking out my userpage I never thought anyone would. Anywho, I am kinda new-ish so don't expect me to get everything perfect. anyway, I have some possibly unanswered questions on talk pages of games I have, if you could answer them that would be awsomeness.Okay, so, read on, Dedicated gamer! may you stomps always be precise, and your Poltergust 3000 always strike true, and first, heh-heh.

About Me: My Games

As you can probably guess my favourite mario series character is Luigi. i've played about 15 mario games plus super smash bros. brawl and melee. 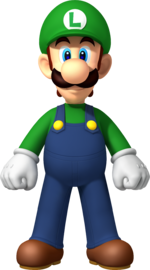 I have/had these Mario games:

also some people have been telling me to "stop posting responses on old talk pages" (and i'm not trying to be rude when i say this) stop reminding me. sometimes i'm not really paying attention or i'm just giving info(for instance: "dimentio's kill count"). so, i'll try to not do that anymore.

also my old sig: When Chauncey screams, so do I. is referring to chauncey's face when he screams/whinges, the first time I saw him do that I almost had a heart attack! He makes a similar face in his Silver frame, shown here.

About Me: My Favourite Mario Game Music

In no paticular order:

** Dimentio is My role model.

* Princess Toadstoooooool is so misguided.

* Mario makes one of the best living paintings I've ever seen.

*** Peach says "Help!" too much, and is somewhat irritating.

Characters that creep me out

Gallery Of Games I Have