Gioku knows a lot about a few of the Mario games, such as Super Mario Bros. 2 and Mario Kart Super Circuit.

Gioku is a Shy Guy, and was created by a random event of the keyboard when creating a Club Penguin account. Gioku is the standard user name for this Shy Guy. He has appeared in Photobucket, where is username was Gioku1, and the same is true for his appearance on YouTube. The reason his name was already taken is unknown. Gioku has thus appeared in many places, including Wikipedia, Spore, and the Plants vs. Zombies wiki.

Gioku loves to make Computer games and play Mario Games. His most memorable quote is: "What?" Also, he is a good animator. He is also skilled in Photoshop.

Here are his favorite pages:

These are the Mario games owned by Gioku.

These facts are completely non-bias, and are not opinions. They are cold, hard, facts.

2.The Ninjis from SMB 2 are the real ones.

3.Nintendo has better games than other companies.

4.There have been more DS's sold than Gameboys.

5.The Shy Guys are planning to take over the world.

6.The Shy Guys are too shy to take over the world.

11.Bowser is less than all three.

12.Link should ride Yoshi and not a horse.

13.In a fight, Yoshi could beat Mario, Luigi, Toad, and Naval Piranha at the same time with his hands tied behind his back.

14.If Mario used his fists, Mario games wouldn't be fair.

16.If Boos attacked when Mario looked at them, Mario would be dead by now.

17.Mario Party Advance is the worst out of the series.

18.The Blue Koopa Shell should have been in New Super Mario Bros. Wii.

19.The Mega Mushroom should have been in it too.

20.Yoshi secretly wishes he could ride Mario for a change.

21.In a race, Yoshi with the Red Pepper Powerup could beat Sonic in a race.

22.Luigi would be nothing without Mario.

27.Peach needs to save herself for once.

28.It's a good thing the sequel to Super Mario World was Yoshi's Island and not Super Mario's Wacky worlds.

29.Donkey Kong has not had a proper battle with Mario since Donkey Kong.

30.Mario vs. Donkey Kong is a disgrace to the original game.

31.There have been five consoles made by Nintendo.

33.The NES is also known as the Famicom.

34.Super Mario Galaxy 2 has too many Powerups for its own good.

35.Luigi needs another game for himself.

36.Super Mario Pinball worked too much on graphics and not enough on gameplay.

37.Nintendo has made 10 handhelds, and are working on an eleventh.

38.The Koopalings and Bowser Jr. should not co-exist.

39.Yoshi needs his own 3D adventure.

41.Daisy has the worst history of all Mario Characters.

43.Daisy is the same as Peach, only orange.

45.Waluigi is a construction worker.

46.Wario has appeared in a Starfy game.

49.The SNES is also known as the Super Famicom.

50.Eight out of Ten people would prefer the 3DS with launch games over Heat Vision.

56.New Super Mario Bros. Wii has the most epic Bowser Battle ever.

57.Salvo the Slime is the coolest Boss ever.

58.There was going to be two player co-op in New Super Mario Bros.

59.The DS is a Tank compared to the DS Lite.

60.The DS Lite is better than the DSi.

64.The Nintendo 64 had terrible graphics, even though people thought it was good.

65.Super Mario Galaxy 2 is better than the first.

66.Luigi is also known as the green moocher.

67.Shy Guy should be a normal character in Mario Kart.

68.Luigi thinks he is a ghost buster.

69.The Ghost Busters are better Ghost hunters than Luigi.

71.There shouldn't be a Propeller block, the Propeller Mushroom is enough.

73.The worst Bowser battle is the original.

74.Lakitu is afraid to fight Mario like a man.

77.The DSi would be better if it was backwards compatible.

78.Mario should be in Punch-out.

79.Paper Mario: The thousand year door is the best of the bunch.

80.This is the Eightieth fact.

81.Mario is one of the best known celebrities in the world.

83.Luigi was originally a green Mario in Mario Bros.

84.All the best nintendo characters are fat.

85.Wario and Waluigi should have been in New Super Mario Bros. Wii, not some Toads.

87.The Penguin suit is the best Mario Powerup.

90.Shy Guy needs his own game.

92.Banzai Bills are weaker than they appear.

95.Oh, wait, that was already mentioned.

97.Luigi is scared to fly out of pipes.

98.Mario has a mustache. Shocker!

100.Lumas are cooler than Starmen. 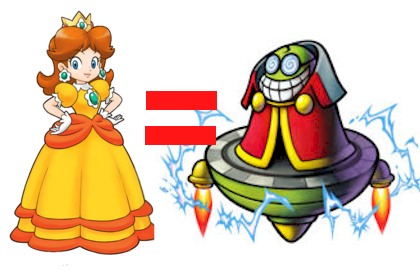