From the Super Mario Wiki, the Mario encyclopedia
< The 'Shroom:Issue 143
Jump to navigationJump to search

Hi, everybody! Welcome to the February edition of Palette Swap!

I hope your February has been going better than mine is: we're absolutely miserable in Michigan. Between the polar vortex last month and the freezing rain creating horrible driving conditions this month, it seems like winter is just determined to storm the Midwest for everything we missed in December. Honestly, though, that's fine with me, but could you stop making it so difficult to drive?

I've been slooooooooooowly working my way through Yo-Kai Watch 3, which very recently came out in the West. Unfortunately, it suffers some of the same problems that its predecessor had: an extremely long tutorial period. I'll let you know more of my thoughts on this game next month, when I can get out of the tutorials and get a chance to really play it. All I can say is, give this series your support! It's good enough to stand on it's own, as not just "some Pokemon rip-off" or whatever.

We have a couple great sections for you this month, so I'll shut up and let you get to the good part! ~FunkyK38

Another big win for Yoshi876 (talk) with his What's on the Box? section looking at the boxart for Super Mario World! Following him are Superchao (talk) and The Pyro Guy (talk), respectively. Thank you so much to everyone who voted, and please keep it up! 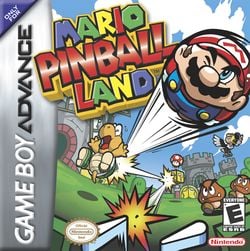 I love zany spin-offs as much as the next guy, honestly just look at the amount of Pokémon spin-offs I own, but I have never dabbled in any of the pinball games that Nintendo has released over the years. This hasn't changed, but I figured I might as well analyse the boxart for this zany spin-off.

The boxart makes it clear that this is a pinball-inspired game, what with Mario in the shape of a ball bouncing off of things, and the flippers near the bottom of the boxart. Presumably, the boxart is also showing off one of the game's key mechanics as a Super Mushroom is coming out of a ? Block. Now, I know this isn't something new, but given how they usually power something up, I would presume that it is a similar scenario here, just in a pinball way.

The boxart also features a nice setting with castles, and what might be a windmill, showing off some location variety. And as always, there's Goombas, Koopa Troopas, and even this time a Kondor. I wish we saw the Kondor more.

I like this boxart, it showcases what the game is about, features a couple of vital game elements, has a nice art style and even the title of the game has a little slant. It's a little touch, but I absolutely love it, but I do have one issue. Where is Mario headed? He's clearly about to jump over the flippers, so is he leaving the game? Is a Mario-shaped pinball about to come and hit me in the face? I hope not…

As this section has shown a few times in the past, there are some passionate and unabashedly nerdy love songs out there. It's February again, so it seemed right to again dig into some music perfect for a romantic evening with your one and only Player Two. Thankfully, Danica offers just such a thing on her YouTube channel HelloIAmDanica. With a few different franchises represented, those looking to impress (or at least entertain!) anyone from the Pokémaniac in their life to their spelunking Minecraft architect. 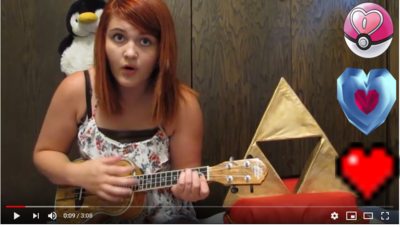 A ukulele and a voice, it turns out that’s all you need to make romantic little odes inspired by three popular videogames.

Unlike some of the other artists featured in this section, Danica doesn’t do much in the way of video editing or complex instrumentation; all of her videos consist only of her singing as she strums a simple little tune on a ukulele or guitar. That’s not to say that her music is any worse or better, of course! Her approach instead imbues her music with a simplistic and cute, almost folksy, charm. Combined with her admittedly cheesy but nevertheless endearing lyrics, and her style makes these songs perfect for the nerdy romantic; even those with only the most basic musical experience can pick up an instrument and offer a serenade. Failing that, the lyrics themselves can be picked from the music and used as tongue-in-cheek romantic poetry.

In none of her songs does Danica's charming approach and tendency towards cheesy lyrics shine as clearly as in her "Pokémon Love Song". A song filled with puns on Pokémon species and moves might not sound that romantic conceptually, but this piece manages to convey an earnest affection. It’s lighthearted and fun first and foremost, the kind of song meant for a singer who isn’t overly concerned with taking themselves too seriously. Simultaneously clever and, for lack of a better term, silly as the line is, it’s difficult for both performer and listener to keep a straight face at "You may say I'm Exeggcute, but I say you're Exeggutor." For me, that line more or less summarizes the song, but there’s plenty of other clever puns, including the wonderful slant rhyme of "Bellossom" for "awesome" in the line "But you're so Bellossom / You've got me under Hypnosis." On top of it all, most of the puns are taken from the first and second generations of the series, so this song should get a laugh out of your beloved whether they’ve been with the series from the start, dropped out after the first few games, or only recently joined in with Pokémon Go and the Let’s Go titles.

"Pokémon Love Song" might give a good impression of what to expect from Danica, but it’s certainly not the only option. For The Legend of Zelda fans, she has "Princess of Destiny". This song still has a lighthearted feel but might be a better option for folks looking for something a bit more serious. It’s packed with heartwarming lines which extensively reference the Zelda franchise (Ocarina of Time and Majora’s Mask primarily) and its elements. Once again, the simplicity of the song combines with pleasant images of a deep love mixed with clever nods to the world of Hyrule in a way that leaves listeners unable to help but smile. "To the Nether and Back" offers a very similar experience to fans of Minecraft. Danica’s "I Made You in Sims" takes a different approach; it’s less about an existing romance and more so a reflection on hopes for a future relationship. Still, for the right person, it might have enough charm to come across as an enjoyable and benevolent parody of a traditional romantic song. While the aforementioned songs focus on videogames, Danica doesn’t leave fans of other media out. "Hero in the Air" is closer to "Princess of Destiny" and "To the Nether in Back" in terms of offering a fun and lighthearted romantic piece packed with references. In this case, though, the source of those references is more varied. Comics, movies, tabletop role-playing games, and television shows traditionally considered “nerdy” receive nods throughout the piece. I must offer a word of caution with this one, though. “Hero in the Air” relies heavily on media stereotypes of nerds (think The Big Bang Theory as reference if it helps), so, while it’s all meant in good fun, it may not appeal equally to everyone.

Beyond these original pieces, Danica offers covers of "Still Alive" from Portal and the first English opening to the Pokémon anime. While I’d like to say she has more and send you off to explore her channel, she hasn't uploaded any new videos in the past four years. Still, what she does have, charming and cute as it is, is certainly worth listening to. So, go give her music a listen, then, if you aren't afraid to embarrass yourself, Sewaddle your partner in blankets, pull out an instrument, and try singing these for yourself through the grins and laughs.