Readers beware, you're in for despair! Upupupu... 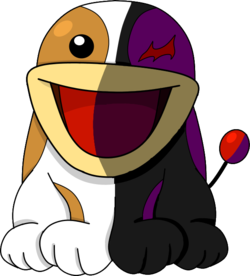 As the cornerstone of MarioWiki fan-content, The 'Shroom prides itself with being able to host community events such as Art Contests and large-scale forum games. Our most recent forum game, 'Shroom Mafia III, was hosted by the ever-talented Stooben Rooben (talk), and went down as one of the most ambitious and exhausting Mafia games ever played on the forums. What was intended to be an easygoing few months of fun community Mafia soon spanned almost half a year—with many lies, betrayed trust and jarates battering the wills of those who participated until finally, the last Mafia member fell, and the game was over. Until recently, the likelihood of another game competing with it in both scope and creativity was assumed to be nigh impossible, but along came Mario Awards Killing Game: Despair Mansion.

During this year's MarioWiki Awards season, Lord Bowser (talk) hosted a unique role-playing forum game that hadn't yet been experienced by the community: the Killing Game. Inspired by the murder-heavy visual novel series Danganronpa, the premise of the Killing Game was simple: 20 players were all locked in a haunted mansion, with the only way out being to kill each other and hopefully survive until the end; and the punishment for being caught as a murderer was your own execution. Players would spend night phases sending in actions they'd perform in the mansion in a role-playing fashion (some not entirely innocent, of course), and spend the next day solving the nightly murder by exploring rooms and uncovering clues given to them by the host. Nearly everything was permitted, from murdering someone with a princess crown, to blowing up an entire room with an RC car bomb, to becoming paranoid over the existence of swords. The whole debacle unfolded both on the forums and in the game's dedicated IRC channel #mwiki-killing-game, spawning puzzling murder cases, heaps of community-made fan art, and amazing memories for all involved. The zealous amount of dedication to the game was unlike any forum game played before it, and if you're interested in learning more, you can read the official post-game write-up by Lord Bowser himself right here!

Undoubtedly, Mario Awards Killing Game was a breath of fresh air for a community that had already played Mafia games to death, for newcomers who never had an interest in Mafia, and for people who had exhausted themselves with 'Shroom Mafia III. Afterward, many players expressed that they'd love to see future installments, but not to the same frequency that Mafia has already had.

So, with lessons learned from 'Shroom Mafia, and feedback given from the first ever Mario Awards Killing Game, today, we're officially opening sign-ups for The 'Shroom Killing Game: Goodbye Poochy! Featuring two co-hosts for a more balanced workload, Meta Knight (talk) and I are hosting a brand new Killing Game this holiday season, replacing 'Shroom Mafias of years past.

As this is an official 'Shroom Contest, the prizes being offered for this killing game are 'Shroom Tokens, which can be exchanged for Awards Tokens after next year's festivities, and later redeemed for a myriad of prizes such as gift cards and Steam games. So, if you're interested in any number of those things, or just want the thrill of participating in a Killing Game, this contest is for you! We've come up with some important changes to the formula established by Lord Bowser, so keep reading to find out what's new, improved, and 'Shroomy!

Firstly, the core aspects of Killing Game established by Lord Bowser remain mostly unchanged. It will be a role-playing game, where 20 players will be locked in a building with the only means of escape being to survive until the end. Each night, players can send in whatever night actions they wish, and each day, players can solve murders by asking to inspect whatever they wish. Further details on how this works will be given in the sign-up thread on the forums, which is where the game will be primarily run (though we will also be reusing the killing game IRC channel for real-time investigating).

In the previous Killing Game, it was possible for all players to perform the same actions with the chance of success relying entirely upon other players' actions. An order of actions was established by the host each night, and if there were supposedly multiple "possible" kills in the same night, then RNG would determine which one was a success. This system, while fair to some extent, meant that the player eliminated each night was essentially chosen at will by the host, and some player's actions became entirely for naught.

Another notable issue was the difficulty of committing murders and actually getting away with it. Only one player out of twenty was able to successfully pull off a murder in the last Killing Game, and though there were close calls, a nigh-unwinnable game is something we'd rather avoid this time. There were cases where Lord Bowser had to resort to incapacitating players who would've heard/seen crucial evidence to balance the game, and while Lord Bowser did a great job providing us with ample oppprtunities to uncover evidence, a lot of murder cases had us walking in circles until we were prodded.

We thought of ways we could improve this formula while still maintaining the role playing aspect of the game, and thus, came up with 'Stats. In the vein of D&D, these are individualised role modifiers that allow for a more logical approach to determining who receives the successful kill each night. Each role receives 'Stat values between 1 and 5, and these will affect that players night and day actions.

Another benefit 'Stats provide is ease of accessibility for sending in night actions, as they give you a pretty fair estimation of things your character should be able to achieve without having to resort to pages and pages of nuanced evidence hiding unless you wish to do so. Of course, these 'Stats don't necessarily lock you into playing a certain way. A player with low 'Scheming can still set up an elaborate rube goldberg machine of death and still successfully murder. The 'Stats simply allow the hosts to determine the nightkill in a more logical way.

Other, smaller QoL gameplay changes include the removal of the lately-developed "sweeping" method of evidence hunting. In the previous game, a player could simply post "I sweep the mansion for X" and would find the evidence they were looking for immediately and with no issues. This obviously made finding crucial evidence much easier for the non-killers, but it became nearly impossible to hide evidence as a killer. We hope to avoid "impossible to find" evidence with the 'Sleuthing, 'Situational Awareness, and 'Stealthiness 'Stats.

We've also removed the easy accessibility of fingerprinting from everyone. Again, fingerprinting was another method non-killers could use at will and with no negative consequence to anyone but the killer. The option may be open to certain players with the use of an Ultimate skill, however.

Speaking of skills, the rolecards for this game have been updated with a myriad of additional details such as height, likes, dislikes, and blood type, to name a few. Forbidden Actions will certainly make a return, and obviously Ultimate Powers. Ultimate Powers are now more nuanced as well. Instead of having one strong power, roles can now have a variety of themed perks that make sense for someone with a particular specialty. This can include simply having the highest value for a particular 'Stat, to having the ability to obtain unique evidence exclusive to them or even enter secret rooms. Other changes to the setting of this Killing Game are detailed in the next section. 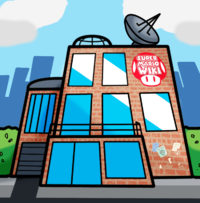 The setting for the last Killing Game was Luigi's Mansion, and was perfect for not only the tone of the killing game, but the familiarity with the setting resulted in a number of creative and hilarious night actions. However, in The 'Shroom Killing Game, we've designed our own "mansion": The 'Shroom Headquarters. This large, 3-storey building features relevant facilities for all of The Shroom's subteams, directors, and alumni, and has been specifically mapped with the Killing Game in mind. It boasts everything from guest bedrooms for all of those writers who stay up to the deadline making their articles, to an underground cinema where Critic Corner buffs can watch and review films, and many more rooms relevant to each department of the Shroom.

Also unique to this building is the inclusion of an elevator. The elevator grants all players fast and easy access to 3 of the headquarters' 4 floors. While normal stairways (and some hidden passageways) exist, the use of the elevator swiftens the movement process and conserves your energy, meaning you will look less tired if your 'Stamina 'Stat is low.

Unfortunately, we cannot replicate the familiarity with Luigi's Mansion that gave players a common ground for their actions, but will attempt to alleviate this slightly by describing the contents of each room similar to how Lord Bowser structured his map last game.

As our setting is The 'Shroom HQ, we are following in the footsteps of Stooben and making the roles for this game based entirely on The 'Shroom and its writers. Sadly, while roleclaiming didn't present itself as an issue in the last game, in a game like this where being a certain character is enough to indict someone (see: Mafia) we feel its only fair to limit claiming to Ultimate Powers only right off the bat. This allows us to keep some of surprise in-tact with role reveals, and makes it easier for potential killers to avoid suspicion.

Oh, and did we mention Monopoochy? He's going to be this game's mascot!

If you managed to survive that wall of text, you're fit enough to survive in this Killing Game!

Both Meta Knight and I will continue to post updates on other game mechanics we've yet to iron out, such as Double Murder Nights and other special effects, as well as the full map of the Shroom HQ once finalised. An official start date for the game will be set in the near future as well. But right now, you can sign up to be a participant in the game on the MarioWiki forums, so please head over here and check it out!