I know it's Halloween and all but I've been quite busy recently so I haven't had much time to write a big scary Halloween editorial. Sorry everyone. Maybe I'll do something scary for next month's issue...

On a less spooky note, congrats to Gaberskitty, who has been hired to write the Shop Scout!

Cooler weather will move into Toad Town this week, as will several bands of rain showers. This week would be a good week to do indoor activities, and starting Tuesday, Princess Peach will begin her annual Tea Party series. Parties will run from 2-7 p.m. each day, and tickets are on sale now. Peach Castle is also holding several Hoops games this week, so citizens can come spend their rainy days watching skilled players on the court.

Here is the forecast for New Donk City for the upcoming week as well, where Mario will be touring for exhibition for the week. 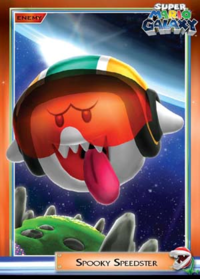 You can now pick up trading cards at funerals. What has the world come to?

In another horrific racing incident, it appears that the Spooky Speedster has sadly passed into another realm. Potentially even gone to an entirely different galaxy. With all these racers dropping like flies, who's next? Koopa the Quick?

The Spooky Speedster died as he lived, in a blaze of burning fire. Though given that fire doesn't really do well in space, it is a wonder how this was his cause of death. But when we're talking about a ghost who has died, I guess we can throw logic out of the window.

Many Boos were sad to see the Speedster go. King Boo told me that his loss "wasn't that bad" due to him living in a different galaxy, and having no interaction with the Boos down here on the Mushroom Planet. Meanwhile, Stanley told me that he had "no idea who you're on about," likely for the same reasons.

Luckily, someone who did know him was Mario. The heroic plumber was glad to see me, saying: "Mamma mia! You again? Which one of my pointless acquaintances have dropped dead now that you want me to give some namby-pandy statement about how much I cared about them? The Spooky Speedster? Why would I care about him? He made it nearly impossible for me to get the Power Stars, and save the universe. If it was up to him, Bowser would probably be ruling us all, and he'd just be hugging some dumb star. I could not care less about his death."

The Spooky Speedster was well loved by the whole community, as we heard there. Hus funeral will be held in a week's time, and you'll have to get there quick, otherwise it could be you losing your life.

Hello, my fellow members of the Mushroom Kingdom! It's me, Arch, here to bring you another edition of travel guide! 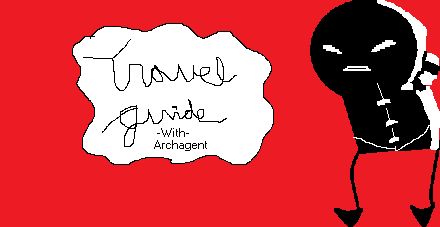 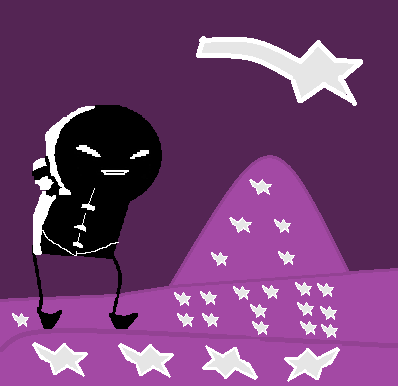 While you probably already made this inference, I find Stardust Fields to be absolutely gorgeous! This is a large field on the border of the Beanbean and Mushroom Kingdoms, and the ground is made of fallen stars. (Also, there are lots of barrels. Don't know why.) The sky is a perpetual night, so that's pretty awesome. This is the same site that the Mario Brothers crash landed in the War on Cackletta in 2003. However, they aren't the only duo who frequent this site, as the celebrity duo of the Starshade Bros. live here! 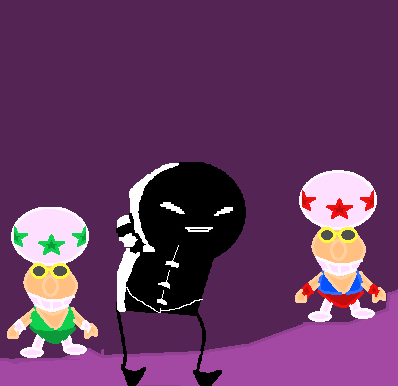 Here's a photo I got with them! (Unfortunately, there's no embarrassingly bad autograph this time.) Their underground tunnel system reaches all over the field, so make sure to keep an eye out for star-shaped entrances!

Speaking of bros, I had to hone my jumping abilities to cross the border, as two 90's surfer dudes were guarding the border between the two kingdoms. Make sure if you frequent that you are that you are a good jumper, as a passport or visa will not help you here! I even got a souvenir from the border patrol dudes: 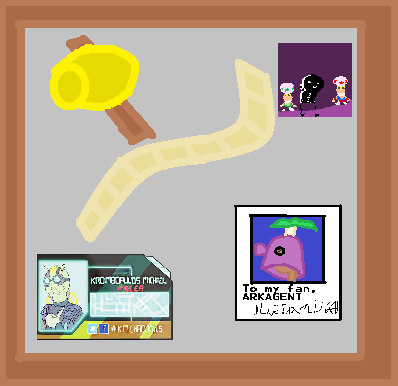 You see that rope in my suitcase right, folks, that's the same rope used by the Mario Bros. during the War on Cackletta 14 years ago! Hopefully the border patrol weren't just giving me some random rope and lying though…

Anyways, that's it for this issue of travel guide! If you like beautiful places for night-time dates, then Stardust Fields is for you! Auf Wiedersehen!

Toadsworth rides a rollercoaster to demonstrate an acceleration experiment, tomorrow at 9pm on MKBC2.

New: The Way the World Works
MKBC2, 9pm
Genre: Science documentary
Filmed on the glorious Isle Delfino, The Way The World Works is a brand new science show which educates people about the wonders of physics, biology and chemistry. In this first episode, documentary specialist Toadsworth explores speed, velocity, acceleration... and a rather high-pace rollercoaster in Pinna Park. Both educational and strangely funny. 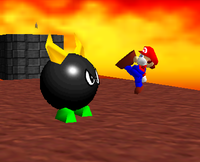 One of the highlights of True Lava is Mario and Big Bully's fight, on the Reality Channel.

True Lava
Reality Channel, 10pm
Genre: Reality show
The third episode of the reality show airs today, where six random celebrities are placed in a lava-filled world, and then cameras are put up to see if they do anything interesting. Today, interesting antics include everyone shouting at each other, and one celebrity gets severe burns and is hospitalised, resulting in more shouting. Ideal for reality fans, not so much for anyone else.

Princess Peach is the first victim in Fungus, a horror film tomorrow night at 11.30pm.

All this and more will be shown two days after yesterday and one day before two days from now, if you want to catch up with it. And the next TV Tomorrow article will be available two weeks and four days after ten days from now, and the television discussed in that will be shown fifteen days after two weeks from now and I'm just going to shut up now before they rename my article TV Three Days After Two Days Ago. See you next time.

Ever wake up early and need to get a refreshing head start to the day? Well come to Star Bean Cafe! At this establishment owned by the famous Professor Elvin Gadd, you can enjoy a warm Bean Bean Brew or, a cold Chuckola Cola. We have a large selection of pastries and foodstuffs of all kind, from a bland meal to a Chocolate Cake! Baked fresh daily by enslaved ghosts for your tasting pleasure. This is also a hangout spot for the world, and by world I mean Kingdom, famous Mario Brothers! They used this as a hideaway and item shop during the war against Cackletta in 2003. Anyway it is time to take a yummy bite, although I'm not sure this cake should have blue frosting on it. 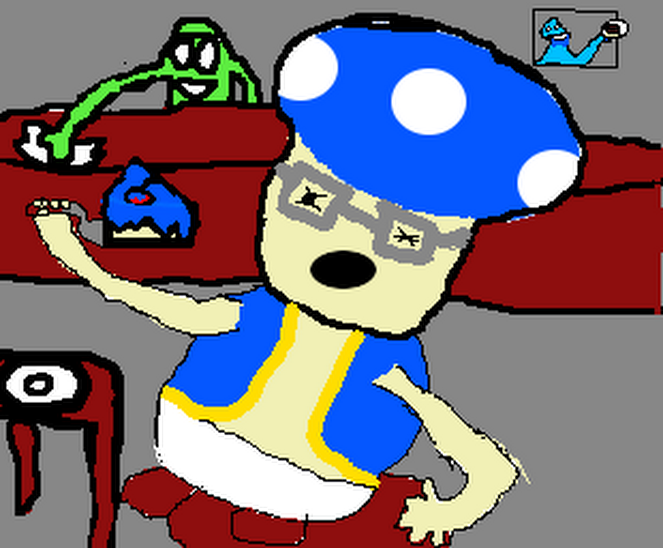 Yuck! Tastes like raw sewage! Wait are you writing this all down? I mean shop here and have deliciously disquieting ectoplasm on your food and in your drinks! I guess I'll just try the bland meal! At least this food isn't covered in blue ghost snot. 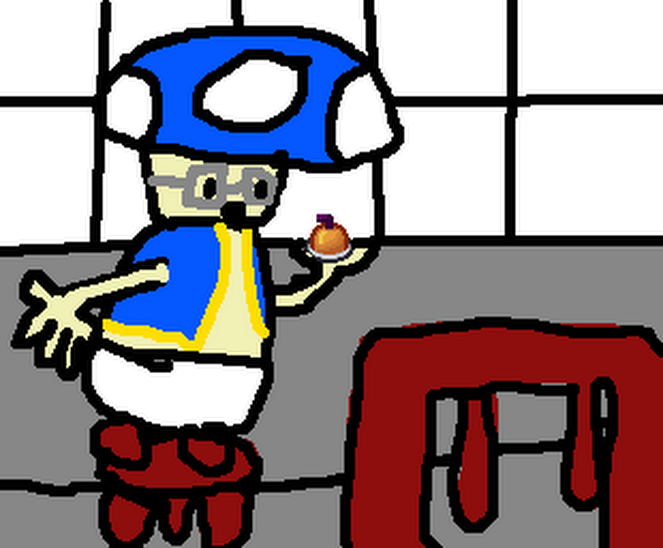 Hey I took one bite and this thing was bursting with flavor! We should change the name from Bland Meal to Bursting with Flavor Meal! Well then I guess that would get rid of the whole "Bland" feature that makes people buy it. 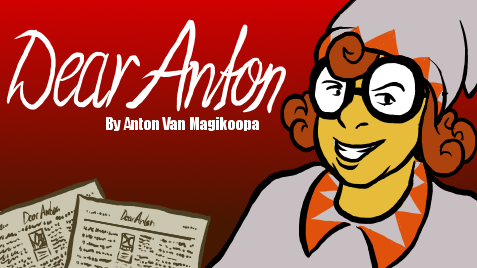