Why the crap is this here? HyperToad

It's more the fact that you didn't seriously made an attempt to critizise the article, just shouted at it. And a talk page doesn't need shouting. - Cobold (talk · contribs) 13:59, 23 January 2008 (EST)

I was critizing the article, and I hasn't shouting. It had a question mark. Anyway, why is this here? It seems a little too background-ish, like making an article of the Super Mario 64 Health bar or something. HyperToad

Yeah, it sounds like Snufit Ball or something... So why do we need an article of a floating Mario head? 0_o BLOC PARTIER.

Well, snufit ball was awesome too, but it got deleted. And anyway, where was this really named? GreenKoopa - Comments or questions?

Like Plums said above, the background of SM64DS's minigames. Even still, though, it's debatable if that's really referring to the head, but I think this should stay; it's got quite a bit of info for a smaller article. YELLOWYOSHI398

Why? It was officially named "mario mini", not "Mario Mini". So we should leave it, or SoS recently put a {{TobeDeleted}} template on there, so alot of users are gonna discuss about this I guess. Super-Yoshi

I see no reason for a deletion. It's officially named, it's interactive, it appears in multiple games and the article has a notable amount of information. --Grandy02 11:12, 24 November 2008 (EST)

I think we need some more proof. Some actual visual proof. A word in the background of a mini-game doesn't sound very official. Where does this word appear? For what mini-games? That information is not given. Furthermore, the info for mini-games does not necessarily apply to all games where Mario's head is featured (such as Mario Teaches Typing - that's simply a representation of Mario). The info at best would only apply to those mini-games. And does this info apply to Mario Paint, where you can stamp a head of Mario on the page without his body? Does it apply to the intro to the Super Mario Bros. Super Show, which feature's Mario's head talking to the audience? Should we make articles for all the character heads that appear in the Mario Party series? Mario's head appears in a lot of games, so technically we should be adding information for all of Mario's head's appearances. I feel the concept of an interactive Mario head is best served in Mario's article or in the articles of individual games. Ultimately I don't think a word in the background of a mini-game is conclusive evidence of a name for Mario's head. -- Son of Suns (talk)

I have to side with SoS and the above user who said this is like making an article about a health bar. Please also note that the Super Mario 64 instruction booklet referred to it as "Mario's face." Stumpers! 14:23, 24 November 2008 (EST)

Good concerns, the ones made by SoS and Stumpers. I suggest that a sysop redirect this for Mario's face since it was mentioned in the SM64DS Manual.Wii Ware 14:37, 24 November 2008 (EST)

I wouldn't. That would be like creating an article for "Yoshi's Arm" or "Waluigi's Nose." This article is listed under "game mechanics" but it doesn't describe a general trend in gameplay across the Mario series. The use of Mario's face is dependent on the individual game Mario's face is deployed in. Any information, if kept, should be merged with its repsective game or mini-game article. Son of Suns (talk)

There is a difference with this and (Character Body Part). The concept of having a Giant Flying Mario head has appeared in multiple games where the head was separate from Mario, how many times did you see Waluigi's nose separate from his body? --Blitzwing 18:30, 24 November 2008 (EST)

Blitz has a point here, if it appeared in alot of stuff, even in like 4 games, it deserves to atleast be mentioned. Super-Yoshi

Floating character heads have appeared a lot of games as well. Should articles be written about them? Every playable character has a flying character head in Mario Party and Mario Party 2 (and I'm sure a few more, such as when character heads have to look the right way, shape the face (including Bowser's face), etc.); Yoshi has a flying head in Super Mario 64 DS; Mario, Luigi, Toad, Peach, Yoshi, and Miis all had flying heads in Super Mario Galaxy; Wario has a flying head in WarioWare: Smooth Moves, etc. And do icons (avatars) of floating heads count as floating heads? Super Mario All-Stars feature Mario heads in the background of treasure rooms, does that count? Frankly the concept is too vague to merit an article, but as I mentioned before could be written about in respective game (or mini-game) articles. The name "mario mini" only really applies to those one or two mini-games (which may only mean that the Mario is part of the mini-game, hence "mini mario," not a name for the head). We simply don't know what that even refers too. Son of Suns (talk) 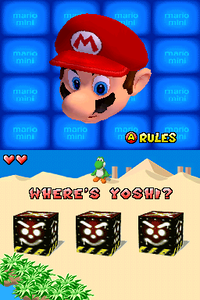 Here's an image of mario mini, and the little tv's or w.e they are only appear when mario mini does, what do you think it could be referring too? Also, I agree with your point about the floating characters faces. Super-Yoshi

Maybe we could have a proposal about this..Talk? C???

Just thought I'd drop in my rational for removing the deletion request. Basically, the article is detailed and well worked on, so I found it kind of odd that a deletion tag would suddenly be dropped on it. That's basically it. I have no other opinion on this matter and will not stand in the way of whatever decision is made. --

My logic for keeping the article about the Mario head is that it's more important, the other characters floating head are well- Floating heads. But the Giant Mario head has been the subject of two/three/four minigames, a tech demo and was the host of another game (You might say the head in Teaches Typing is just a representation, but then, why didn't they just use Mario in his complete body? He appears as himself in the Story mode), the Mario Floating head as it appear in SM64DS/Typing is more relevant than every other instance of floating head. --Blitzwing 15:33, 25 November 2008 (EST)

Regardless if this article is kept, the name of mario mini is problematic. As Blitzwing just pointed out (but I don't neccessarily agree with) is that there seems to be an established convention of floating Mario heads for the past few years (to decade or more) in the greater Mario franchise and thus the concept deserves an article. Fine, that's a valid point. However, the name mario mini is extremely vague - we don't know what it refers to, and ultimately at the very most I feel it only applies (if it applies at all) to the Mario heads in those few SM64DS mini-games, but not to the tech demo, not to the Mario Teaches Typing head, etc. Basically, there is a convention of floating Mario heads, but it is a stretch to call them all "mario mini", especially since the meaning of the words is ambiguous. So if this article is kept, I suggest a name change that actually accomodates all the depictions of this Mario head convention. -- Son of Suns (talk)

I think this deserves an article, but I agree that the name is questionable. Well, the words appear in some mini-games in the background. Yes, mini-games. As you can see here, "mini mario" is also used in the Japanese version. Most of you surely know that Japanese often don't care that much if those English words really make sense or not (think of "Shine Get!"), as long as it's "cool" and "exotic". I mean, "mario mini" could just stand for "Mario mini-games". The Mario head in Super Mario 64 has a background pattern that reads "Super Mario 64". Because, well, you play the named game. And perhaps because you play mini-games instead of the "big game", it has been changed to "mario mini" for the mini-games. Just a thought. --Grandy02 16:25, 25 November 2008 (EST)

Yeah, I too think the name is kind of weird. And as someone pointed out above, the SM64 manual call it "Mario's Face", that seems a name more official than some nonsense sentence in the background of a few minigames. --Blitzwing 17:42, 25 November 2008 (EST)

Bu what about the the mario mini from Mario Teaches Typing 2? It not called Mario's Face right or it is?

I say it is a seperate character because one quote from MTT2 he says that he finally gets to "move on the ground", implying the character has never touched the ground and is therefore not Mario.--Koopapoopa 01:33, 18 May 2010 (EDT)

Would the introduction to the show be counted as an appearance of the face... it has the floating, disembodied head of Mario. Stumpers! 16:49, 12 March 2009 (EDT)

I think this should be merged with the mario article.

Is this even needed? Am I the only one feeling this article is a bit redundant?--

I agree. I don't think Mario's face needs an entire article. Maybe move some info to relevant sections in the Mario article, you know? It's even suggested in the section above.

While I would normally agree with you on anything else, Mario's face has been subject to alot of things, been rgarded as a character, and it's not like the article is a stub. Eh. And why bother?Toadbrigade5 (talk) 17:15, 8 July 2014 (EDT)

1. As discussed years ago, shouldn't we mention the face's appearance in the Super Mario Bros Super Show's opening?

2. Shouldn't we mention other characters' heads here as well like add the images of characters heads such as the file icons from Super Mario Galaxy 1 & 2 and the face lift images from Mario Party 1 & 2's Face Lift minigame in the image section? --TheGreenBeetle (talk) 23:05, December 4, 2019 (EST)