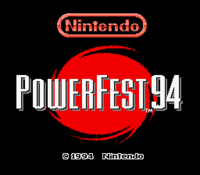 Players like in the Nintendo World Championships had to complete three tasks within a certain amount of time. The following tasks on the following games are shown below:

The final score of each player was calculated with the following equation:

The Town Competitions were held for three days and the finals were held on a late Sunday afternoon. Eight competitors had the Top 8 final scores, so they were entered into the Top 8.

The top four competitors with the highest scores moved on to the next round.

The top 2 competitors with the highest scores moved on to the next round.

The final 2 competitors went against each other and the winner was crowned "Town Champion".

As Town Competitions finished up, the top four teams from these smaller competitions were emitted to the World Championships, hosted in San Diego, California. The four teams were:

The Tornadoes won the championship with the highest score.

The top two players on Team Tornadoes played against each other on a specialized version of Donkey Kong Country. The two players were Iarossi Mike and Brandon Veach, and Iarossi was victorious, receiving the tile as the 1994 Nintendo Powerfest World Champion.