Welcome to my talk page! Feel free to ask questions and chat ;D! 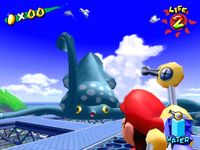 Please ,make sure putting into the images their license tags. ¢oincoll€ctor

Hi Vini64!!!! Im Ratfink43, and if you need help with any Mario games you can ask me becuase Im, like an expert. I have all 3 games in the Paper Mario seiries and suprisingly Super Paper Mario is my favorite. Also please talk to me on my talk page becuase I seek conversation!!!! I also like fawful, he is hilarious. Ratfink43

Your english wasnt bad at all!! :) So what do you mean your brazillian? Do you live in Brazil or did you come from Brazil or were your parents from brazil? Well, I think its cool becuase I always wanted 2 go to Brazil. Anyway, Have you played Mario and Luigi Superstar Saga? I just beat that game last month. I also never heard of Mr. Game and Watch Until Super Smash Bros. Brawl, Do you think I should Buy his games? Also please link to your talk page when U write 2 me, I think you know how to but in case dont you can ask a sysop like Walkazo Becuase I cant really explain it. Ratfink43

I heard Playing games on an emulator is hard, I dont know becuase I havent really played on an emulator. Are you excited for Mario and Luigi Bowsers Inside Story? I am. So, you are really good at speaking English for a brazzilian, and your native launguage, is, Portuguesse?(I probobly spelled it wrong). I know in Brazil they speak Portugesse. Anyway, check out the youtube videos on my User Page, their pretty funny XD!!! If you want 2 know how to put videos on your User Page ask me ;D Ratfink43

OK!!!! XD So, have you seen The youtube video called"Bowser and his minions"? (Its on my User Page.) It shows Bowser is a blockhead who needs to learn common sense:) Ratfink43

Vini, don't think of me as cruel please. I'll save two of those images for you. Marioguy1 (talk)

OK, here goes. It's using a lot of rules but I can do it. I noticed that the Mpurple shell one was fan-art so I added it to the article Spiny Shell because it is a spiny shell after all. Then I transferred the authentic thingy of the dancing mario one from your personal images to a userbox image and it's now supported by this page and not this page. Now you can choose one of these two images to be licensed under you again:

So which do you like more? Tell me which and I will remove its deletion request. Marioguy1 (talk)

It will be the Image:Testforthebest9901.JPG, cause it's one of my best records ever :D! Thank you very much, I am very thankful for this... Vini64

I really think waulugi needs a bigger role in the Mario sieries. By the way, you dont like Super Paper Mario? Have you played it to the end(like I did)? Just becuase its not an RPG doesent mean its bad. But, you have an opinion, im just suggesting you give it a chance :) Ratfink43

I dont have a youtube account becuase you need to be 13 and im 12 :( Have you played the Mario and Luigi sieries? Ratfink43

you should go to marioluigi.wikia.com! its a new wiki about the M&L sieries. we need help creating the wiki, you should join!!!!

Hey sorry I didnt respond in a long time, I was on vacation. So, how are you doing?

Im fine. So do you have a Wii? Ratfink43

Hi Vini64! I love Nintendo 64 too! I especially like Paper Mario and Diddy Kong Racing! fawfulfury65

Yep I love the Mario and Luigi series! But I also love the Paper Mario series just as much!!! In fact, I pretty much like all the Mario RPGs. I don't like how there are recopies of N64 games on Nintendo DS because they ruin the game in the recopy! The original is always better, don't you think? fawfulfury65

Yes they should. Mario Party 3 is the best of the Mario Parties! So your from Brazil, right? fawfulfury65

Yep, I do have a Gamecube and a Wii! I'm not sure what's better: Wii or N64. Well, do you happen to have Conker's Bad Fur Day on N64? Or is that not released in Brazil... I wanted to get that, but it's rated M (For people over 18). Anyway, what's your youtube username? I would like to see some of your videos! fawfulfury65

Sorry it took me a really long time to reply...

Hey, I'm back! Yes Michael Jackson sings very well, but it's not like I'm his #1 fan. I like that song, Beat It, or something like that. Fawfulfury65

So, you like Thriller, eh? We played that at our first game a few weeks ago. It's a pretty fun song.

OMG your the guy from youtube. I love your Best NGM. I just figured out that you are the same guy! OMG! Want to be friends?!?!?

Yes but I share it with my sister. She always deletes my vids and I delete her's she uploads it again. It's so dumb. Username is KOUKLITSA14. I know you have more but I love the NGM the most.

Actually No that is kinda weird. But I guess people like Pinball.

I never checked the whole thing but some of my favorites are.

Forest Maze from the same game

and Inside the Castle Walls from Mario64

Thanks for the memories.

Vini64, I see that you constantly edit the section of Game Footage of NSMBW and put the Link of your video there, but I created that section and uploaded especially the video for that so please stop editing it and leave as it was!!!--MATEOELBACAN 15:46, 26 October 2009 (EDT)

Hi Vini64, I noticed you're uploading so many screenshots, wow!
Can I ask how you make them, do you get them from the internet or do you take them from your tv or something like that?
Greetings! Karinmij (talk)

Okay, an emulator, I hadn't thought of that yet ;) I was thinking of some sort of divice you connect with the tv, but an emulator is easier ofcourse. I hope you're buying original games too? :D Karinmij (talk)

The FURY user is here![edit]

I got New Super Mario Bros. Wii the day it came out too! But I'm only on world 5... But I've only had it for 2 days and with school around, maybe I'll beat it before the weekend. I got all the star coins in the first NSMB! And I hate when the last level of a game is easy!!! The Grand Finale Galaxy in Super Mario Galaxy was a rip-off! >:( Fawfulfury65

Hello, seeing that you have NSMBW and that we are helping out on the articles, do you want to be friends?--FREAK ~Game

I beat NSMBW today! You were right, the last level was easy! ): Fawfulfury65

Whats up?! I spent the weekend and Monday playing Mario Party, now I have blisters all over my hand from that Tug-of-War minigame! xD You've played Mario Party before right? Fawfulfury65

Your English was actually perfect there! Anyways, I think that MPDS was really fun, but MP5 was just a series of unfortunate events during gameplay for me. I mean, when I play MP5, something terrible happens to me every single turn, and when something good does happen, I lose that great thing the next turn! You know what I mean right? MP6 was ok, MP7 was pretty boring after a while, MP8... its ok. The first 4 were great though! And Mario Party Advance is annoying! Fawfulfury65

I hope your holidays are great and you have a Happy New Year! MERRY CHRISTMAS, AND HAPPY NEW YEAR!!!!! Your buddy, Fawfulfury65

hello person that i DO NOT KNOW!!![edit]

I'm happy that you like my page! Because of you username, I think you are Vinicius, friend! Can you add me as a Mario Kart DS friend? Thank you.(I'm from Sao Paulo, Brazil, too) - Mario Fan 123