Hey SuperMariosuperfan how about you put more on your user page because you only put like 1 or 2 sentences and 1 image. Well how about looking at my page because it is awesome.

Hi, I see that you like Mario a lot, just like me! I feel a bit lonely so could we become friends and talk about Mario?

Sorry, I wasn't able to talk to you recently because I was banned from using internet. Can you please answer a few questions for me?

Thanks for replying so quickly.

Another set of questions:

Have you been to my userpage? Have you ever clicked "You have new messages(last change)" thing? Have you clicked the Link? By which meaning do you mean "huge" Mario fan :dedicated or chubby?:)

Hi, it's me writting fourth in a row, huh? Thanks for replying, you DO know much about Mario, I'm a huge (dedicated not chuuby - way not too chuuby) Mario fan as well but partically the whole school adores those stupid Halo series and they hate Nintendo so I feel a bit left out but I'm very proud to be a Nintendo fan. (Hint! Hint! My birthday is on 23rd and I want some birthday wishes!!!)

No sorry, I don't know. I don't want to beat the record for most userboxes but I'm counting on you! (*thumbs up*) Am I writting 5th in a row?

Ah well, thenks for telling me! Will you send me some birthday wishes? I'm going to have a Mario themed party and I'm dressing up as Princess Peach. It's in 18 days!!!! I can't wait!! Am I writing 6th in a row?

Well.. with my birthday party... Sorry I can't invite you because it's for my friends from school. But I will tell you how it went. I am going to have a Mario cake (you get them in Tesco's. Should we add an article about them?) and some other food. I need help to get the Mario quiz done. I need some almost impossible questions (15 will do), will you help me to organise it?

I already have one:

I like the queastion with Koopalings. So we have two now. If you think up of any more let me know but don't give the answer (I want to have some fun too). With the bomb-ombs I made up a story where Mario gets a bomb-omb from Bowser disguised as a Toad and Mario says: "Oh, a Bomb-Omb. Thank you very much I will keep it for the next Mario Kart tournament. Hey, it's beeping! Hang on... IT'S GONNA EXPLODE!!! EVERYONE EVACUATE THE BUILDING!!!!!" (And Peach's castle is ruined). I have another question fro the quiz: What is the latest Mario game released (Would Japan count?)?

PSS. I live in Scotland (Yep, that's where men wear skirts) but my first language is Polish. That's why I became an administrator in here. It's a VERY small wiki beacause I don't get a lot of users.

Hi, look at my cake: 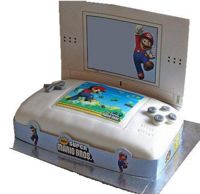 Thanks for the question, I'm trying to get a total of all Mario games released but it's hard because I don't know if releases on multiplatforms should count or not. And I don't know what you mean with the userboxes - are you trying to get as much as possible? Good luck with it! I hope you will soon reach 1 000.

Thank you so much for the wishes!! I remember that once a user known as "Sonic Rocks" has been nice to me so we got each other's friend and Wii code but then he started spamming me via Wii messages and witten heaps of bad stuff on userpedia and other sites. I need to be very carefull now but thanks for good words!!

Are you from America?!!!? Cool, I see that your spelling is quite different and America seems to be on the end of the World and Japan on other.

Hey you look a HUGE Mario fan, do u like Super Mario 64? It's my favorite Mario game, I like it so much dat i have it on N64, Wii, and my comp (besides some cool! hacks of the game i found on the webz). I'm lonely on this wiki and please will you talk to me about SM64?

No, he isn't Koopette. Koopette is annoying him in Bulbapedia Chat, she's flaming everyone pointlessly and asking a troll to be unbanned. (I'm CoolPikachu's sister)Ms. Bianca 22:17, 8 April 2009 (EDT)

I'm sure she will deny everything, believe whoever you want, I've got horrible references of this personMs. Bianca 22:29, 8 April 2009 (EDT)

I don't want to talk about this but I'm forcing myself to explain this to avoid any other questions. Not a lot of users but only one user who sockpuppet'd was being not very nice to me. I try to forget about it all but it's hard because I still have nightmares about that. Please, don't ask any more questions about that subject.

Anyway, I'm suprised that you're almost exacly the same age as me!! (We must be soulmates). Congrats with the method of invisible ink!!!

Not one user, go to the chat and ask about Kool Koopa. Just ask, because of the user, CoolPikachu! was blocked and he had a nightmare about the heavy flames she said to him, if that wasn't enough he was permabanned, I don't put the fault on the sysops but on this Koopette person. You're being unfair with CoolPikachu!,MsK,you did flame himand create these lies about him, grow up and stop being a n'er do-wells. Ms. Bianca 09:20, 9 April 2009 (EDT)

Look, you're free to believe whoever you want; Koopette has proven to be a bad person, she largely offended my sister Elvira @ Userpedia, about Un-Mario Wiki I don't know if she offended anyone, but just take a look at some of her alternate accounts there, Elvira is here with me and she's pointing which sockpuppets are Koopette's on the Userpedia Block log:

This person is probably RUDNICKI. Just notice the "MARIO IS ITALIAN!!!" on her/his page (Rudnicki's trademark was "OMG MARIO IS ITALAIN ANTIFANS YOU NO LIKE HIM DENY HIS ITALIANISM w.e"), So just don't get fooled by Rudnicki. Even the sysops think she is Rudnicki by her actions on the forums, they only not ban her because they don't have proofMs. Bianca 10:01, 9 April 2009 (EDT)

i have a quiz for you: It's called Quiz128, answer the questions and get COOKIES

What are you sorry for? Anyways, "soulmate" means that someone is quite similar to the other person, that could understand the other person and has the same interests. The shy guy question completely gob-smacked me. There are 10?

Wow, thanks for the questions! You've really helped me!! Now I got another problem: What Mario-themed birthday party games we should play?

PS. How many beans are there in Mario & Luigi: Les Freres du Temps?

A birthday party with only 3 games? Anyways, we're going to play on Wii/DS. But will you answer this question for me: How many bean are in this game? I've deleted all data on purpose so I could complete the game without Action Replay. It's even easier!!!

Thanks for the ideas! You don't have to think up of any more. Unless there are really good ideas. The food is going to be red-and-green. Red and green fruits (strawberry and kiwi)red and green drinks and red and green sauce dips. I will try to do mushroom muffins too!

PS what colour is your DS? Mine's red.

hi again Lol, Jamie and Pokémon Master screwed my account up so I changed to this one k?

PSS: What games do u have for Wii?

Weññ, you need to be active, trustworthy and willing to help the wiki, if you are, then the sysops may decide to make you one!

Hello, Supermariosuperfan. I was looking at your user page (it is very interesting, by the way) and I noticed that you have played Mario and Luigi: Superstar Saga and Mario and Luigi: Partners in Time. I have a wiki about the Mario and Luigi series, and so far no one has joined me. I was wondering if you would be interested in joining my wiki and contributing. We currently have 36 articles, and your help would be greatly appreciated. If you are interested in helping me, then leave me a message on my talk page and you can set up an account on my wiki. Thank you for your time and I hope to hear from you soon! - Shadow34

P.S. the URL is marioluigi.wikia.com.

EDIT: I know you wanted more userboxes, so here's one from me! |-

I'm one of them. ¢oincoll€ctor

No problem. Now, the wiki discourages that articles have speculative info, that you add conjectures or theories made by yourself without an official source like for example informations given from nintendo. Also, if you make an article or add an info in an article about something made by fans (example: fan-made series, games, etc), that's considered fanon and the wiki discourages that too. Adding these things anyway in an article will be rapidly taken off. ¢oincoll€ctor

Yeah, I made animated sprites as a hobby and make for some users, but unfortunately I'm not on it anymore...

In a few words, a patroller is an user that can block or unblock an user and revert an user's edits. A sysop does the same thing but also delete, restore or protect pages and delete images.

PS: Tucayo is a sysop now. See ya!

Yeah, I used Adobe Photoshop to make those animations. ¢oincoll€ctor

You can't delete an image in the wiki. You have to ask a sysop to delete the image you choose, and they will take away. Only sysops can delete images.

All your page said was "Only those who know the truth will see or something like that thanks for the help, though. (?)

Who cares, I still don't know what the heck your talking about, dodo!

please speak english and come on, click the link![edit]

May you please just tell me in english, AND WOULD YOU PLEASE CLICK THE LINK ALREADY?

I not messing with any sysops or patrollers, I'm just telling 2257 that I don't know how to make a sig.

My cell phone was malfunctioning. I threw it against the wall, and the next thing I knew your page was like that..., then it wouldn't work, and I had to restart my computer. I was going to remind you to stop editing your userpage so much, and use the preview button.

Look here:Dry dry bone's page. You shouldn't put so many edits on your userpage or any page in general without marking them as minor. User:MarioMan3000 got blocked for this.

Did you just want to play the japanese levels? They're pretty hard, and you can play on your computer using this save file I got from somewhere lol. Do you want it? Super-Yoshi

I have two, just rename them the same as your rom. I forgot which on the japanese one is tho, but have fun :P Super-Yoshi

No its just a save file, and no its not illegal. Super-Yoshi