I've found all the pics I could use for the Donkey Kong games right now, so there won't be any more. I purposely didn't add any new templates, because that would've slowed me down. Booster.

I was wondering if you could add ONE character to Brawl, who would it be?

all taken care of, thanks for the notice.

but modern sysops do the best protection. ;)

just came across my mind why did you revert Mack the knife's edit to the primid page?

You can make people laugh by signing at user:dummmmmmy/humorteamsignup.--Dummmmmmy 10:25, 8 September 2007 (EDT)

Check out my new SPRITE!

There is still more to come

Use the Silver Mario sprites for now : )

Hello. Sorry, but you cannot remove support votes for any FA nomination. Only oppose votes can be removed if they are invalid. Thanks. -- Son of Suns|Son of Suns

Oh, well anyway, on userpedia i'm making a game called factory chaos, and well, some of it is like yours but, well if it bothers you then i won't make it.

HOLY S**T! THATS ALOT MORE THAN ME! well, i don't have much main, but i think i have about a thousand overall. Hey get on Userpedia!

R U STILL ON USERPEDIA?

Happy Birthday to me!

No thanks! But thank you though.

Sorry! Most likely say that to my bro, SonicMario (send it to him). I'm not going on chat either. That causes me to force quit Safari.

YOu do know you sig still says Lario right?(Toadbert101|

BTW you want your forums name changed too?

Also can you remove the "Articles that have been deleted" bit? Its creating more wanted articles.

Happy to know, speaking of proposal, I responded to you on the "Walkthrought-style level article" one, please check it. GLowsquid, I think you should change your signature. 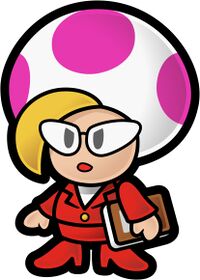 by saving this image...

File:Jolene.PNG
and replace this image.

Replying to a message: Just so you know Mr. Guy, It was I, PP who said that, not Walkazo. PP

That's how I felt about it, really. Fan votes are ridiculous! They should not be kept. I was just telling SoS my thoughts on that ridiculous system. My Bloody Valentine But, your welcome. :P

Yes, but plz, next time, READ MY COMMENTS. TELL ME ON MY TALK PAGE. Now, yes. I all I have to do is recolur Mario simple has saying pie or MM10!

Minimariolover10 TALK TO ME ABOUT MINIES!! And my brother joined today. Also, check Userpedia :)

Ciao! Did you change your name to Mr. Guy?

I know. Remember - if you see a nomination for an article that you do not think is FA worthy, please oppose with a valid reason. It is up to the opposers to keep the FAs at a high level of quality. -- Son of Suns

OK Lario, sorry I didn't go on the forums earlier, but my first thread in teh forums is NSMB2?. Leave a comment!

What do you mean? I have a sig.

It depends... are many people on furoms?~Lil ' Boo

The Boo Mansoin wiki is our competetion, I never knew that! Thats so cool!

How did you know?

that makes cents!(I forgot how to spell the other cents : P)

I don't know if you've already seen this, but I just thought you'd like to know that I made some sprites of these. Ice Lakitu Sprites

DP needed them for his comic. Has every pose except Surfing, and Bros. Moves.

Hola Mr. Guy! Cool new sprites! I would use em now but I still have your old sprites and I've already started Part 2 of issue 5 of my comic. I don't wanna make the comic look wierd. ~Lil ' Boo

Do you read my comics?