From the Super Mario Wiki, the Mario encyclopedia
Jump to navigationJump to search
Status:I decided not to retire. For now

I enjoy to see whos online! 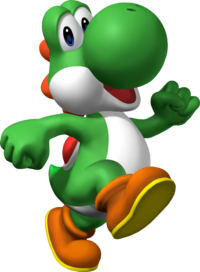 Hi! this is my talk pgae feel free to comment about my page or just to say somthing to me.

When adding a new section, please do the following:

thank you(plese comment below the "Salutations, Yoshi301"). Please don't swear on my talk page. If you would like you could ask for help of any of the video games I am far at.

This is a list of petitions that will be on my talk page. This is them. When Signing them this is waht you should do *{{User:username|username}}

Super Paper Mario was a disappointment and not as good as the first two.[edit]

(This on is more of an agreement then a petition, but...)

Chuck Quizmo should be the next host of Mario Party[edit]

I Have No Idea Who Is Chuck Quizmo That's Why I Oppose.

Lakitu should be playable in Mario Baseball(either)[edit]

Rare should have stayed with Nintendo[edit]

There should be a Donkey Kong Country 4[edit]

The Koopalings are better than Bowser jr.[edit]

yes its been a while so tell me how you been?

Well 'cause I'm too much busy in real world

I will miss you tooSee the Crazy Interviews!!!

Hi from User:Cmario17. Want to be friends?

'Cause I never did a friend request. Neither did you, so, "unofficial." PS. I don't know how to make friend requests. Lemmy Koopa Fan (talk) <== even though you could probaly guess

Please PM Super Mario Bros. and Gabumon your 'Shroom section on the forums (our forums, which one did you think?) by no later than March 14th. Please remember to save a copy in your outbox. If you can't, be sure to tell us soon and we'll be sure to punish you cruelly work something out.

I can see that you never got my userbox, so here it is!

No, I can't find yours anywhere... At least, I didn't find it on your userpage (Although I've missed someone's before and they had it there) If you noticed on my userpage, I set up a "blank box" for anyone that I don't have a box for. It is one of my "unlisted" goals to fill all of those in. (Meaning that you should give me that userbox as soon as possible!)

EDIT: HOWEVER, I did find an "Egg Yoshi" friend userbox on Cherrybomb444's page... is that it? (For now, that's what I'm using (I'm sorry if that counts as stealing))

I'm sorry that I failed to see it before... You could have just said that you put CODE above your userbox tower. Most of the time I have to find someone's userbox, its in the form of a userbox! (not words).

Did you really mean to post your ENTIRE userpage? According to the code you put in, you typed {{User:Egg Yoshi}}. Whether just only meant to sign the page or rub it in my face is another story.

Great, now I have to archive AGAIN...

Hello, you havent sent me your shroom section, please do so ASAP, due date is the 10th

Hey, I went back and changed the : to a |, so it all fits on my talk page again. (Almost same effect as deleting it) The link to "Chapter 2" is still there, but totally empty; I'm going to reuse it. Sorry, I was just overreacting before; but I left the new rule there. (By the way, you would've been exempt that time because I made the rule afterward)

I like your userpage. Mind if we become friends?

Please PM Super Mario Bros. and Gabumon your 'Shroom section on the forums (our forums, which one did you think?) by no later than March 14th. Please remember to save a copy in your outbox. If you can't, be sure to tell us soon and we'll be sure to punish you cruelly work something out.

Come to Wal*Mart*Uigi Guy, we have lots of good deals!

I do have a small one. But those are just my friend userboxes, and I don't know how I did that. If making userboxes were just a little bit simpler, I'd probably have billions. :) Okay, maybe not that much. Wheeee (random)

Yeah. the funny thing is, I'm going to change it again, this time to Takharii, which will be permanent. But I have to wait 'till May because I've changed it too many times recently lol. —★レシイラムtalk 00:50, 5 March 2010 (EST)

I can't believe no one has commented about the fact that my animation corner is gone! I think my page was too long or something so a sysop or a bureaucrat deleted it. To tell the truth, I don't blame them! Lemmy Koopa Fan (talk) P.S. I only did this because I had nothing else to edit.

Yeah, neither did I until I came across this animation I didn't have, so I was like: "I'll put this in my animation corner! *I go to put it in* WHAT THE?! Lemmy Koopa Fan (talk)

That's my friend userbox!And my favorite Yoshi game is Yoshi's Island (regular).It gets a bit annoying,though...=DYoshiTron

You said you liked quizzes so let's go. Have fun!


Tell me if you've figured it out on my Usertalk! I'll say the answers.
The preceding unsigned comment was added by Paper Mario Kart (talk).

Do you want to be friends? Here is my userbox:

Hey there, I was surfing the web and I casually came here and saw your message, so well, yes I still remember you and how we used to be good friends here, it's been a long time since then, so anyways, good to see you're still alive :) user:Luigi_128