Hello everyone, and welcome again to my AMAZING HORSE Should Have Been section, where I discuss what should have been in a game, and the beta elements of said game. This month, I received a personal message on the MarioWiki forums from my good friend, Paper Yoshi (known there as Deutschland) requesting that I write about Mario Kart Wii, or Mario Hoops 3‐on‐3. I produced this beautifully‐edited image to convey my newfound feelings: 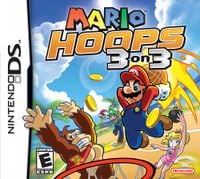 This game was, well, it wasn’t too bad. When I first got it, it was fun to play, but now it seems not only outdated but just not really that fun anymore.

I’ll start with the music – I thought the music was a bit mediocre. Some of the tracks I enjoyed, such as the menu and options theme. I didn’t really like the theme when you’re selecting your characters. I felt it was a bit cheesy and didn’t really fit a Mario game. Also, a minor complaint is that the game kind of overdoes it with the drums: for example, the menu theme has way too many drums in the background in my opinion. It’s a good theme, but it’s overshadowed by the loud drums. Another example is the song that plays on the Bloocheep Sea stage.

The music is generally also a bit painful on the ears. Many of the tracks just seem generic, not really fitting for the stage they play on. They also sound like more or less every other tune that is played in a similar place in similar games (e.g. Wario Factory) – I mean, we’ve seen it all before. I think the music could have been a bit more fitting in this game, not as full of drums and loud instruments playing all over the place, and a little bit less tinny.

Oh, and the sound effects are really annoying – there’s just too much. Every time you collect a Coin that noise plays, but you collect them much more quickly and more often than usual in this game. The noise when you get the ball in the hoop is the worst by far: a horribly loud smashing noise. That same noise plays whenever you get hit and lose your coins, and, it’s just torture to hear. The characters only have about 5 or so phrases they use,

The Mimic first appeared in Final Fantasy IX
and they’re mostly groans and cheers – no real words, apart from the occasional “Yeah!” or “Woohoo!”. I think they should have toned down on the sound effects a bit, and also made the characters say more audible words. 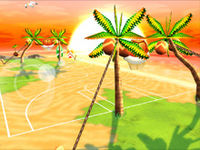 Sunset Beach
Most of the stages are as horribly generic as the music that plays on them – some of them have okay gimmicks, like a rabid Mimic that tries to bite people, but most of the stages have appeared before in the series, and look similar to how they did before, in some cases. In fact, a few stages in this game resemble each other – for example, Bloocheep Sea and Pirate Ship both take place in a similar setting (near the sea) and are right next to each other in the Rainbow Tourney, and after that, the secret course, Rainbow Ship, is a ship, like Pirate Ship. Also, Daisy Garden and Malboro Garden are both gardens 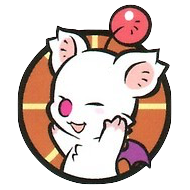 Moogle
in the same cup, and Sunset Beach and Koopa Beach are basically the same course at different times.

I think Nintendo could have been less lazy with the course design, and replaced these bland, similar courts with new, exciting 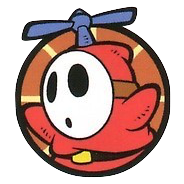 Fly Guy was a character who didn't have a baller name.
courts, like a volcano, or a giant bagel, or an airfield, or even a small town. I also fail to see how some courses are related to the character they are named after. What does Koopa Beach have to do with Koopa Troopas, apart from that shell? Where is the Wario in Wario Factory, apart from his logo? Why does Bowser Jr. not get hit in the face with the ball so much? I think Nintendo could have put something more related to the character in the courts, like a Koopa Troopa in the audience or Wario’s face as well as his logo in his own factory – which is what he would do, knowing him.

The graphics, like most earlier Nintendo DS games, are nothing special and could have been improved. I, to this day, still have no idea what a baller name 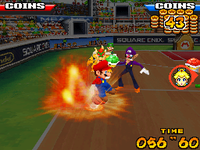 Mario performing his Special Shot – tapping the screen a lot.
is or does. Also, some of them are completely unrelated. For example, Moogle’s is “Game & Watch Me”. Not only does it seem like a pretty stupid thing to say, Moogle has no relation at all to the Game & Watch system. Everything is just completely unrelated: it’s like me taking a blob of mashed potatoes, sticking a snowglobe in and calling it the Easter Bunny.

Oh, happy Easter, by the way.

To add on to the baller name conundrum, a few of the characters don’t even have one – we’ve got some great continuity going on here. I think they should’ve just gotten rid of it, if it is anywhere in the game.

I find that the game has way too many rewards: there’s a reward for every medal in every cup, and it’s just way too much, considering how boring I find this game can get. Most of them are alternate outfits. I think the game could have toned it down a bit on the reward subject. Also, I can never figure out how to change the outfits – I think it says once when you unlock an outfit and that’s it. I’ve only unlocked one, and forgot how. I think the game should have said how to do it somewhere. Perhaps it was X + Y… or down + up, or… I mean, it’s only changing an outfit, not performing a Street Fighter combo.

Bowser’s Castle can become available before he does.
The controls for the game don’t always work well. I find it hard to move and dribble the ball at the same time, and I end up passing the ball when I want to shoot, or move, or dunk, or jump, or even perform a Special Shot, and vice‐versa for all of them, and I find that, without a stylus 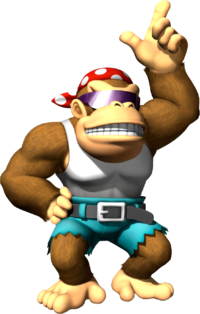 Funky Kong would look even cooler playing basketball. B)
, tapping my finger against the screen rapidly and holding it on the screen hurts my finger and probably the screen itself. I think these problems should have been fixed, by making use of buttons such as A, B, X or Y, or even L and R.

Finally I think Bowser should have been playable from the start – he’s never unlockable, but Bowser Jr. usually is, and now, it’s just the opposite.

Characters who should have been playable

At the moment, there don’t appear to be any known beta elements for this game. So, it looks like I have to go early this time. Sad

Anyway, goodbye, and if you have a suggestion or disagreement, or even just a comment, PM arachnidsGrip on the MarioWiki forum and I’ll mention it in the next Should Have Been.