Greetings, all! For this month’s issue, the winner of last month’s drawing contest was obviously Smg2daisy, as she was the only entry! Congratulations, and great job!

To business, I would like to announce two job openings. KoopaGuy has been removed from his post as writer of Soundtrack of the Month, and Rise Up Above It has decided to quit his job as writer of Character Artwork of the Month. If anyone would like either of these positions, send me an application and I will start your reviewing process!

As always, feel free to send me any sketches of Mario you may draw, and I will post them here for everyone’s viewing enjoyment! Remember to keep it PG, please. 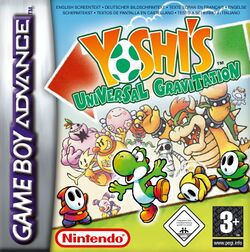 HI, readers! I'm your rocking Co-director, Tucayo, bringing you this month's chosen box-art! As you can see if you look to your right, this month I'll be talking about the cover from Yoshi's Universal Gravitation, or Yoshi Topsy-Turvy, as it is known in the American continent.


As you may have noticed, all the box-arts I have covered so far have come from either Europe, Japan, or Australia, and this one is no exception, being the European and Australian cover from the game. Why don't I choose American box-arts, you may ask. Well, I like the different feel these box-arts convey, and most of the times they end up being less simple than their American counterparts. On to the box itself, we have a group image of all the spirits in the game, plus Yoshi, a trio of Shy-Guys, a Raven, and King Bowser himself. The American box-art forfeits the Raven and Bowser, and placed some spirits on a pretty small montage in the right bottom part of the box, in a simplistic adaptation of the Japanese box-art.


But I'll give the American box-art points for the logo and the name, which, in my opinion, look way better than their European counterparts. 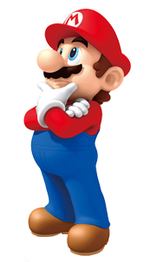 Yep, it's-a him. Looking very thoughtful too; a side of him not often seen *cough*savethegoombas*cough* in the franchise. Despite numerous appearances and artwork, Mario has remained essentially constant, the only big change being the colour-swap of his overalls and his shirt which no doubt most of you know. Or that time when he was an explorer from Colonial Britain. Out of all the various artwork old and new in the gallery for Mario, this one stood out to me from the newer entries. Maybe he's reminiscing about old adventures or tournaments, having a "Wow, did I do all that?" moment. Or perhaps he's finally feeling bad for the Koopa Troop members crushed by his boots. It really depends on the individual, which makes it a fun and interesting artwork. Thanks for reading! 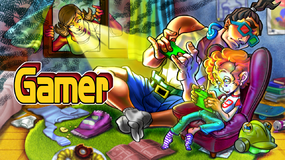 Hello, everyone, and welcome to the April Issue of Random Image of the Month!

This month's Random Image comes from a fairly recent addition to the WarioWare series, the Wii U title Game & Wario. It is the title screen for 9-Volt and 18-Volt's minigame, Gamer.

Gamer has two different modes, each one involving either 9-Volt or 18-Volt playing Balloon Fighter, a version of Balloon Fight with microgames. In the 9-Volt mode, players must complete microgames, while avoiding being seen by 5-Volt, 9-Volt's mother, as they do so. The game ends if the player is caught, if the time runs out or if the player loses all lives. The 18-Volt mode, on the other hand, is a simple WarioWare game, in which players must complete microgames until they run out of lives.

The image is very detailed, showing 9-Volt and 18-Volt playing video games in 9-Volt's bedroom as 5-Volt watches them from the window.

Flavor text: Although it is a simple drawing but I like this. For all parents: Never keep promises to your children. 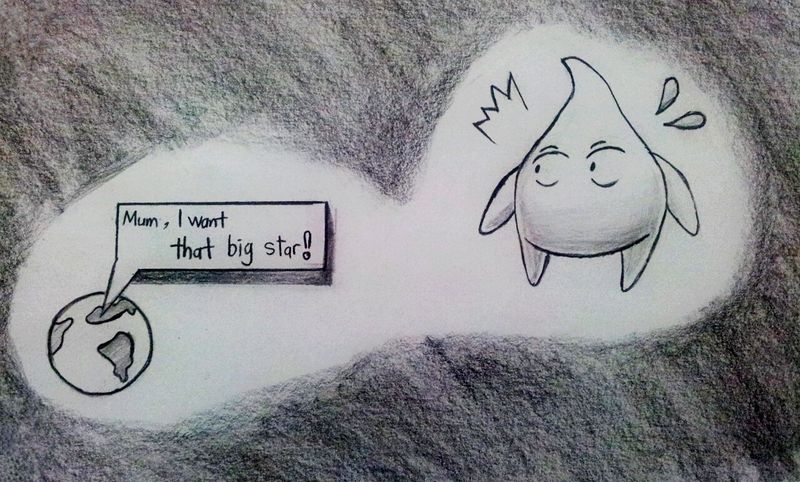 For this month, I have this sprite of a Ghoul Guy from Mario and Luigi: Partners in Time:

. All the cuteness of a Shy Guy mixed with the boo-ness of a Boo! Who wouldn’t love to have one of these haunt their house, knowing how shy the Shy Guy actually is?